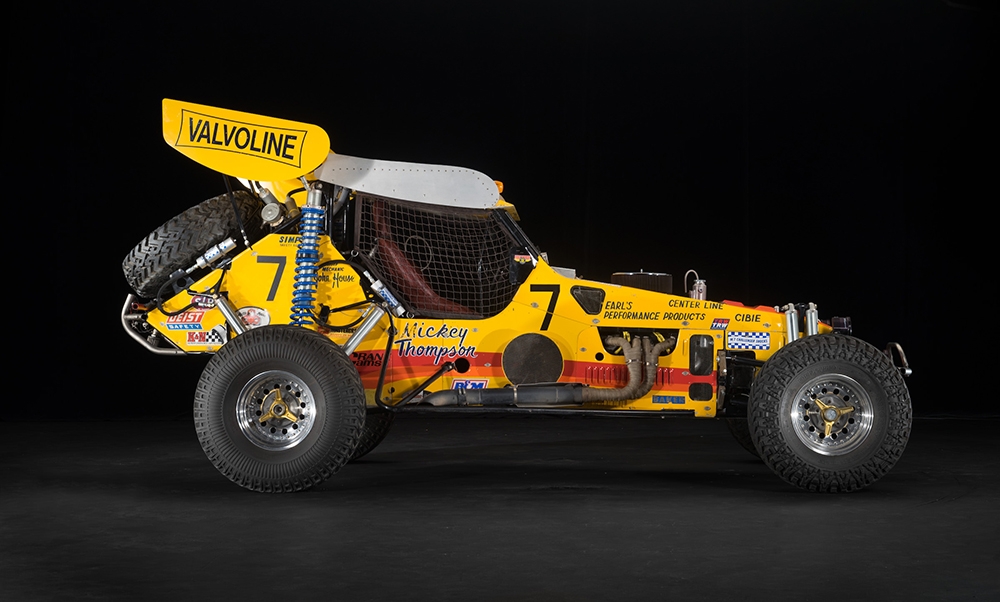 The name Mickey Thompson might be familiar to many as a brand that produces and sells high-quality tyres. But Mickey Thompson was a serious racer and hot-rodder who competed in drag racing, Indy cars and in 1977 set out to build one of the most technically advanced off-road vehicles ever.

At the time the quickest off-road racers were the Class 1 Unlimited Buggies that used suspension from a Volkswagen Beetle, which only afforded them around 250mm of suspension travel while propulsion was via a modified Type 1 Beetle engine increased to 2276cc.

They were fairly lightweight, nimble and robust but this was not enough for Thompson who wanted to take the sport to the next level with a front-mounted American V8 and up to 450mm of suspension travel thanks to A-arm front suspension and a live rear axle.

Starting with a Challenger chassis built by Smokey Allerman, who was famous for building sprint cars back then, the car looked like a sprint car but the suspension was altered with custom-built A-arms and a three-link rear suspension arrangement. They dropped in a 383 stroker Chevrolet V8 from an old Indy car, detuned to 520kW and coupled it to a two-speed Powerglide automatic transmission. With all that weight up front a huge rear wing was added to help stabilize the buggy at high speeds.

At the time, one of the most impressive features was the custom made shock absorbers, each being three-inches in diameter and 41-inches long, fitted with cooling fins, the rear suspension had three shocks per wheel. There was nothing like it in the off-road industry at the time and it took a couple of years for this kind of shock technology to really take off.

While the competition ran 29 and 33-inch tyres respectively, the Challenger 4 was fitted with 33 and 36-inch rubber meaning it could hit bigger obstacles at higher speed.

The competition could not believe that this overweight, big buggy could outmanoeuvre and out power their lightweight buggies. At the first race in 1978 it was leading the race until a gearbox problem catapulted the car into the air and it rolled out of contention. The car was rumoured to run at speeds of up to 240km/h on the open sections but it made Thompson nervous as it was all over the place and needed to be stabilized.

Before the next race, the 1978 Mint 400, Challenger 4’s wheelbase was lengthened substantially to aid with stability, Thompson stared 24th and after the first 160km loop he was leading by 10 minutes and he recorded the fastest ever lap at the Mint 400. He handed the car over to his co-driver with a substantial lead but he unfortunately tangled with slower traffic in the dust, ending his run.

The high horsepower, increased suspension travel was a great idea but didn’t make it an immediate threat to the fellow competitors buggies as Thompson had a hard time not going flat out and would often damage the vehicle to the point that it couldn’t finish the race. Still, he had proved his point and these days you would be hard-pressed to find many competitive off-road rigs fitted with anything smaller than a V8 or not featuring long-travel multiple shock system and we have Thompson to thank for getting the ball rolling on these concepts.