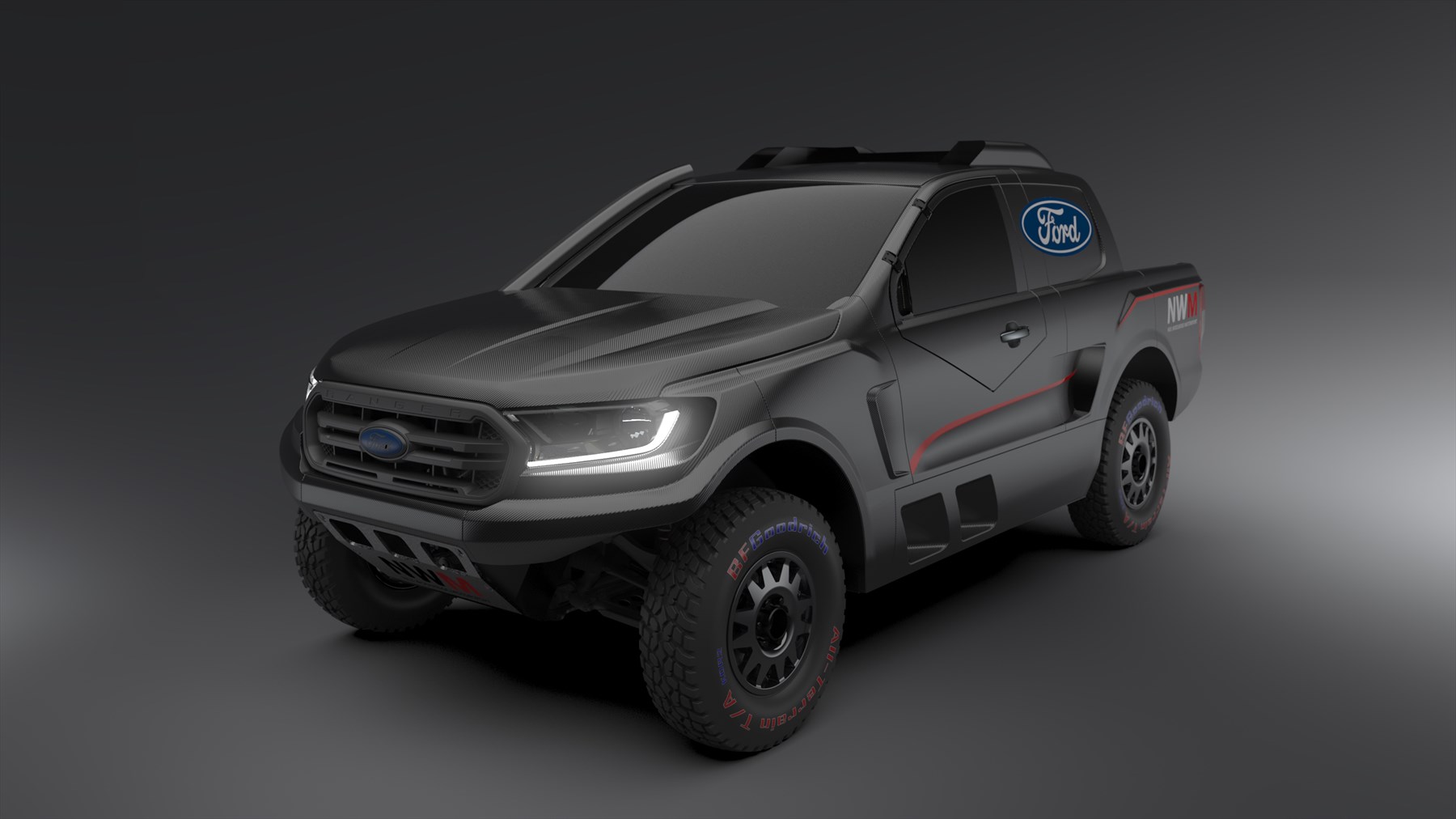 Announced to the world in February 2020 and due to make its highly anticipated debut in the second half of the season, the brand-new cross country racing Ford Ranger is designed by Neil Woolridge Motorsport (NWM) and will elevate the team to the highest level of the sport locally in the domestic series, as well as internationally. It will be the first vehicle in the world to compete under the FIA’s new regulations adopted early this year for turbocharged petrol engines.

The new racing Ranger is in the process of being built at the NWM team’s workshop in Pietermaritzburg – although the build is currently on hold due to the nationwide COVID-19 lockdown. With support from some of the team’s key international partners, the new contender is based on a completely new in-house design, which has been optimised for the best possible packaging, weight distribution and performance.

“Designing and developing an all-new vehicle from the ground up enables us to use the latest technologies and components, while incorporating the valuable experience we gained in the production and constant evolution of the 25 current-generation Ford Ranger V8s we have built over the past seven years,” says Neil Woolridge, NWM team principal. “These Rangers not only won back-to-back SACCS Class T titles in 2018 and 2019, but competed successfully all around the world, including winning an unprecedented four consecutive titles at the Rally dos Sertões in Brazil”.

“Our team has spent more than eight intense months designing every aspect of the new vehicle, which is an exceptional achievement to produce a clean-sheet design,” Woolridge adds. “We’re excited to see the first vehicle coming to life, and can’t wait to finish it and start testing.”

Although the styling of the new Ranger continues to bear clear lineage to the standard Ford Ranger produced at Ford’s Silverton Assembly Plant in Pretoria, the latest design is wider, bolder and much more aggressive than the current V8-powered racing machine, and has been developed to match the broader chassis and suspension layout.

High-strength yet lightweight chromoly tubing is the material of choice for the chassis and integrated roll cage, all of which is manufactured in-house by NWM on a specialised chassis jig.

The body panels are made of carbon fibre for reduced weight and exceptional strength. A unique ‘gullwing’ design has been adopted for the doors, which give the driver and co-driver access to a larger and more spacious cabin, which is also decked out in full carbon fibre.

Behind the crew, where the rear seats would be found in a normal Ranger double cab, is a specially designed 480-litre fuel cell produced by Aero Tec Laboratories in the UK – the same company that has supplied all Formula One teams for the past 25 years. Although the tank won’t be filled to capacity on domestic races, it is designed to carry enough fuel for long-distance endurance stages that are typical of events like the Dakar Rally.

Air-conditioning is provided for the crew, which helps limit fatigue as the cabin temperature can easily soar well above 50-degrees Celsius when racing in hot climates. A heated windscreen is also fitted to eliminate misting up in colder temperatures, or when driving through water crossings.

One of the fundamental changes to the new Ranger is its exciting new engine. In line with, as well as helping to guide the formulation of the FIA’s new regulations, the new-generation vehicle will be powered by Ford’s exceptional 3.5-litre twin-turbo EcoBoost V6 engine.

This is the same engine used in the legendary F-150 Raptor in the US, as well as in the exceptional Ford GT supercar that returned the American brand to the top step of the podium at the 24 Hours of Le Mans in 2016 – a fitting tribute to the historic victory of the legendary Ford GT40 at Le Mans 50 years earlier. In this application, it relies on fully programmable MOTEC electronic engine management, along with twin air filters with dual intercoolers.

The positioning of the engine has also changed significantly in the new design. Where the Mustang-derived 5.0-litre V8 engine used in the current vehicle is located in a traditional front-mounted layout, the 3.5 EcoBoost V6 is mid-mounted well behind the front axle.

“By moving the engine back we achieve far better weight distribution, which will dramatically improve the balance and handling of the vehicle, particularly over rough terrain and jumps,” Woolridge explains. “The compact dimensions of the V6 engine has enabled us to optimise the layout even further than what would have been possible with the larger V8, and it’s also lighter which helps us reduce the overall weight of the new vehicle by 150 kg.”

Despite its smaller size and capacity, the EcoBoost V6 is credited with some impressive numbers. Out the box, it delivers over 400 horsepower (300kW), matched to a substantial 700Nm of torque – the latter representing a significant increase over the naturally aspirated V8, which will further improve tractability and acceleration.

Along with the new engine, there’s a brand new SADEV SC924 Evo six-speed sequential gearbox. Compared to the existing transmission, the new unit is 10 kg lighter, much more compact and uses a lot less oil. Based on the gearbox used by many teams in the World Rally Championship (WRC), it is also designed to be much easier and faster to change during a service stop, if required.

Similarly, new lighter differentials are driven by symmetrical driveshafts and propshafts on both axles, thus reducing complexity, facilitating faster replacement and reducing the number of spare parts that need to be carried. In racing guise, the Ranger is permanent four-wheel drive with limited-slip differentials front and rear to help effectively put the power down.

Another major departure from the solid rear axle Class T-spec Ranger is the fully independent suspension all round – although NWM does produce the current Ranger V8 in independent rear suspension (IRS) configuration for international customers.

The new FIA-class Ranger relies on latest-generation fully adjustable BOS Suspension dampers and springs – which at this stage are exclusively available to NWM. With two units mounted on each corner, it provides an impressive 280mm of travel to soak up the harshest terrain. The new suspension components and IRS will give the new Ranger much better traction in rough and undulating surfaces, which ultimately translates into faster speeds. And, to curtail those speeds, the vehicle relies on high-performance race-spec Brembo brakes with six-piston callipers all round, incorporating water cooling to effectively dissipate heat build-up.

Along with the advanced suspension components, BOS also supplies the hydraulic jack system that is only permitted in the premier FIA category. It allows the team to raise or lower the Ranger at the push of a button instead of using manual high-lift jacks – a major time-saver when replacing a wheel or performing critical repairs during the heat of a race. Three spare wheels can be carried, with two mounted beneath the cabin and one above the rear axle.

The Ford Castrol NWM team competed in the Mpumalanga 400 in Dullstroom in February, with the BF Goodrich KDR2+ tyres fitted to the two existing Ranger V8 entries – and the same rubber will be used throughout the season. Despite the ever-changing conditions encountered during this opening round of the 2020 SACCS, which included everything from loose sand and punishing rocks to lots of mud and standing water, the tyres performed superbly and enabled the team to complete the entire race without a single puncture.

This bodes well for an exciting 2020 season, when racing eventually resumes. Due to the coronavirus lockdown, several races have been cancelled or postponed, and the SACCS is working on a revised calendar for the remainder of this year’s championship in line with government health regulations.