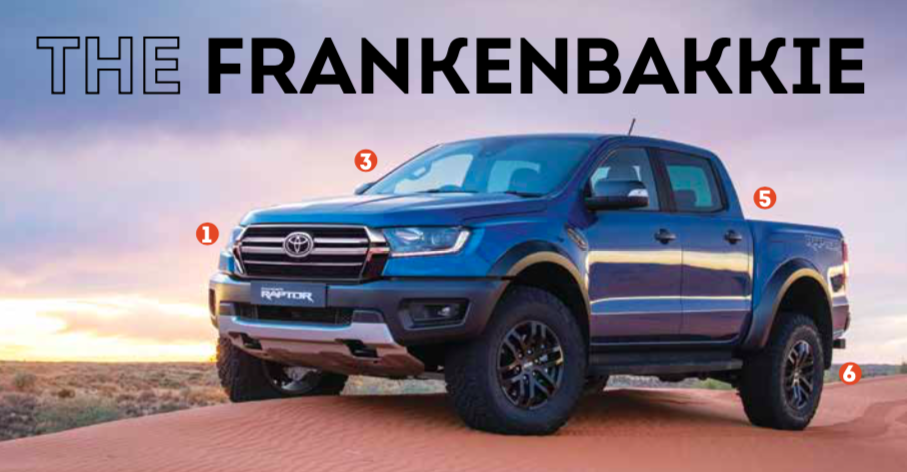 Just imagine: instead of acquiring a bakkie from a dealer in the traditional manner, you can go online, view all the kit and parts and running gear from a comprehensive list, and click away, building the bakkie you want. Here’s our version of such a bakkie. We call it… Frankenbakkie.

ALSO READ: THE FULL STORY BEHIND BAKKIE OF THE YEAR

No other brand enjoys the same level of reverence in Southern Africa. You can’t really go far wrong with a Toyota badge.

The nod went to VW’s 3.0TDI V6 engine. With up to 180kW and 550Nm of torque this engine is not only able to propel the Amarok forward at hot hatch pace, it’s also refined and efficient.

Ford’s Wildtrak comes standard with Adaptive Cruise Control, which uses a sensor behind the rear-view mirror to monitor the distance between the Ford and other cars in front of it. Autonomous braking is also standard, as is lane-keep assist.

We’ll stick with the Ranger Raptor’s interior, thanks. The sporty seats and rally-inspired steering wheel… we like that a lot.

No, it can’t carry a lot of weight. But when you tackle a stretch of dirt in the Raptor, it all makes so much sense. In town the special Fox suspension parts and the Watts link rear set-up provides a comfortable ride, too.

Mitsubishi’s Super Select-II system is the only one here that offers the selection between 2H, 4H (with an open centre differential), 4H Lock (with locked centre diff), and 4Low.