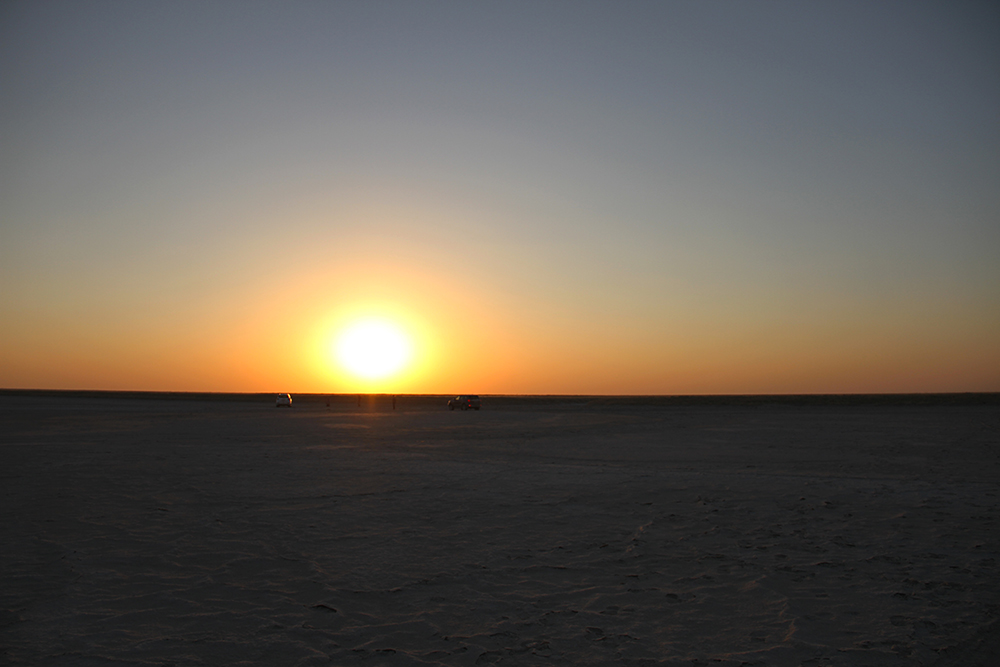 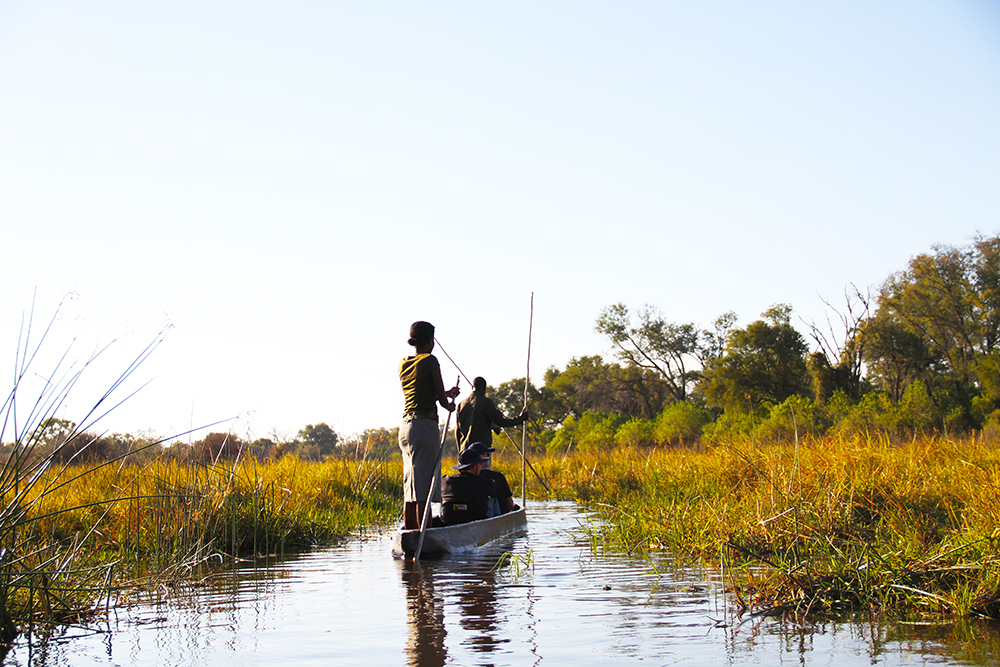 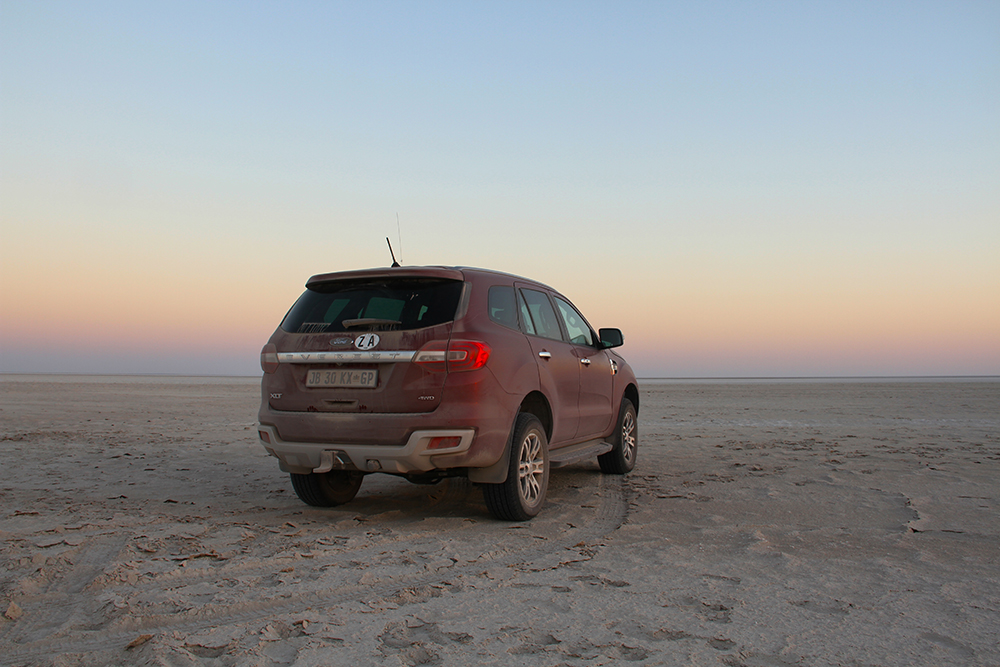 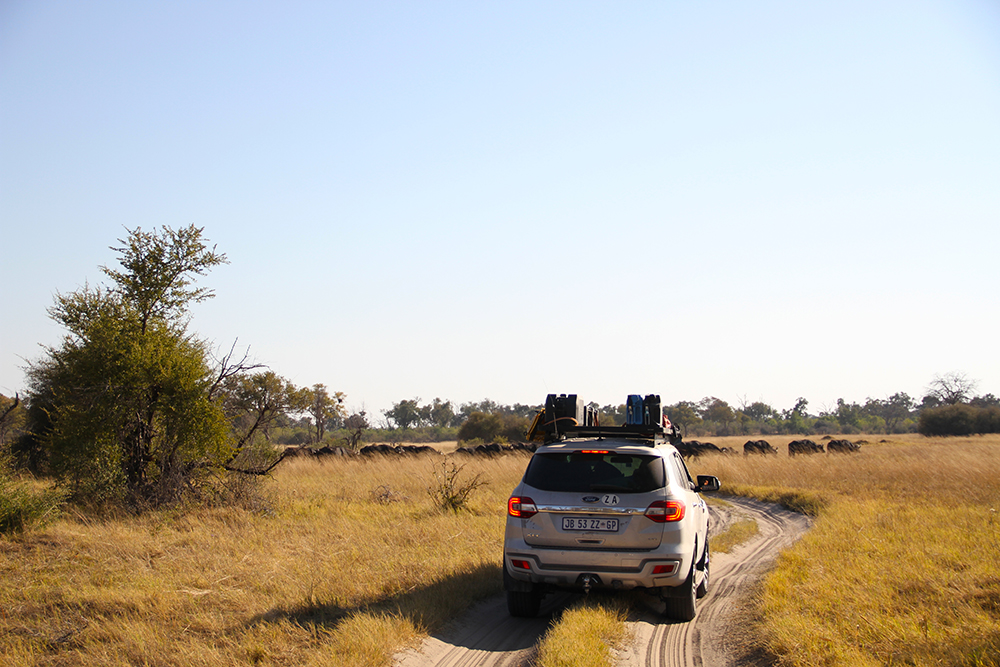 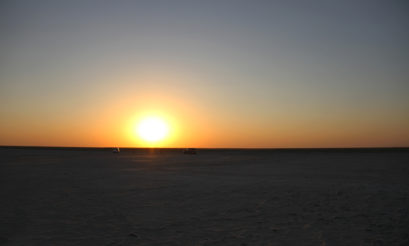 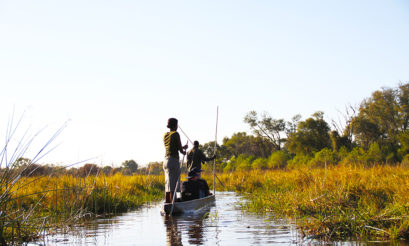 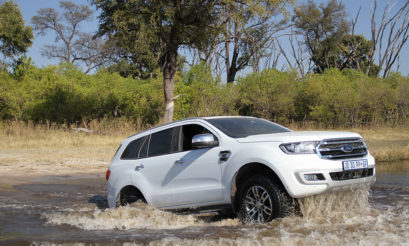 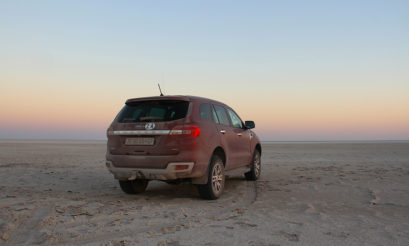 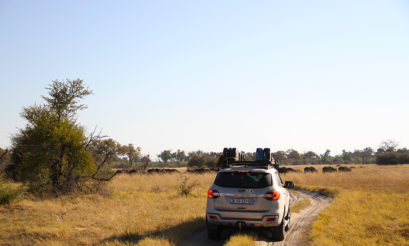 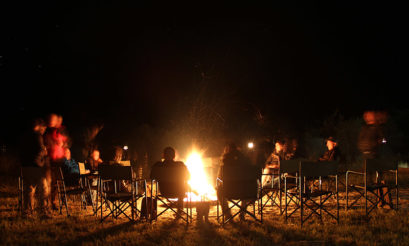 Often the most amazing places can be found just under your nose, or require just a little scratching of the surface.

Tourists make the journey from all over the world to visit Botswana and as South Africans we can really learn a lot from this country.

Botswana are doing a lot of things right. The country understands that tourism and wildlife are their bread and butter and do a lot to look after this. Hunting is largely banned and civilians may not own handguns. Botswana citizens are given rights by the government that allow them to take the law into their own hands and aprehend would be poachers and illegal immigrants.

Sparsely populated the country protects some of the largest areas of wilderness including the the worlds largest elephant population which is conservitaly estimated at 130 000.

Botswana is one of Africa’s most stable countires, is relatively free of corruption and has a good human rights record, so it is not surprising that their currency is stronger than the South African rand, currently at about 1,4 Pula to 1 South African rand. Botswana is the world’s largest producer of diamond and the trade has transformed it into a middle-income nation.

We like Botswana. So when Ford invited us to come rediscover this incredible country aboard the updated Everest, we jumped at the opportunity.

Driving into and out of the Okavango is entirely possible, but due to the remoteness of Northern Botswana, many of the camps are only accessible by air. Maun is considered to be the gateway to the Delta and the Moremi Game Reserve and the towns international airport is regarded as one of the busiest international airports in the southern hemisphere based on aircraft movements. The apron is littered with little planes ready to whisk tourists to exclusive lodges and locations.

Fresh off a number of small aeroplanes we spent the afternoon navigating the Okavango delta in a mekoro. These dugout canoes are made of fibreglass these days as the local tour operators are doing their part to protect the tree population.

This vast inland delta known for its sprawling grassy plains, flood seasonally, becoming a lush animal habitat. This part of Africa is still very wild and never have I seen such a variety and such a large amount of animals.

One of the unique characteristics is that the annual flooding of the Okavango occurs during the dry season, so the native plants and animals have synchronized their biological cycles with these seasonal rains and floods and is home to some of the world’s most endangered species of large mammal. The evening was spent glamping with elephant eating a couple of metres away from our tents.

The next morning we headed south via Maun. It was time to get well acquainted with the Everest as we headed for our date with a very special place.

The Everest has been given subtle styling tweaks and a host of major upgrades to the underpinnings.

The refreshed grille introduces a new level of depth to the design while the lower bumper has been designed to accentuate width, giving the Everest a greater on-road presence.

A new 20-inch wheel has been introduced on the top of the range Everest Limited, featuring a modern split spoke design. 18-inch rims can however be specified according to customer preferences. An additional body colour has been added to the line-up, diffused Silver is a modern take on the typical luxury beige.

Inside the Everest provides premium levels of quality, outstanding interior space and maximum veratility, now with a selection of new colour ways.

Adding further exclusivity to the cabin is the use of contrast stitching on the Everest Limited, along with shadow chrome finishes, perforated leather and high-quality paints that add further lustre to the upgraded interior.

SYNC3 with Navigation is standard fitment on all models from XLT upwards, incorporating 10 speakers, dual USB ports and an eight-inch touch screen display.

The Navigation screen provides a full 3D experience with an elevated map view, enhanced point of interest building images. Similar to searching on Google, destinations can be entered via the search box.

Tracks4Africa is included in the package, as well as access to maps for over 20 countries in Africa. Free annual map updates are included for a period of five years. Smartphone integration is seamless through Apple CarPlay or Android Auto.

Thanks to its versatile seven-seater layout, the Everest provides exceptional versatility and practicality, whether carrying people or folding the seats for added loading capacity.

But the biggest changes are under the skin. Following the recent launch of the all-new 2.0-litre Bi-Turbo and single turbo engines on the new Ford Ranger, these powerful yet efficient engines have now been added to the Everest range.

Building on the innovative technology of the award-winning EcoBoost petrol engines, these Bi-Turbo and single turbo engines deliver improved driveability and torque. The new 10-speed automatic transmission, ensures that these engines are always in the sweet spot in terms of power delivery and efficiency, reducing the gaps between gears provides smoother acceleration response and improved performance at lower engine speeds.

One of the innovative features is the Progressive Range Select (PRS), which gives the driver the ability to lock out gears from the automatic shifting range, providing greater control when driving in slippery conditions, when towing or when climbing steep gradients. Select Shift Transmission functionality is retained, allowing the driver to switch to Sport mode, making the gearbox more responsive for dynamic driving performance

In 4×4 trim this this new gearbox is also mated to the well known 2.2-litre four-cylinder and 3.2-litre five-cylinder Duratorq TDCi engines.

The 2.2 TDCi is offered in the XLS 4×2 model with the current six-speed automatic transmission. XLT customers have the choice of the 3.2 TDCi 4×4 six-speed automatic, the new generation 2.0 single turbo in 4×2 guise, or the Bi-Turbo in two or four-wheel drive. The range topping Limited is available exclusively with the Bi-Turbo engine and four-wheel drive.

With more power and torque and improved efficiency compared to the existing 3.2 TDCi, the new 2.0-litre is a no brainer. Delivering 157kW and 500Nm from as low as 1 750r/min.

Driveability of the 2.0 single turbo is enhanced with nine percent more torque compared to the 2.2 TDCi along with a 13 percent power hike to help drivers effortlessly tackle everyday driving scenarios thanks to 132kW and 420Nm.

The front suspension has also been extensively reworked to achieve significant improvements in ride quality and refinement, without impacting the towing capacity of up to 31000kg on bi-turbo models.

Most importantly is a repositioned front anti-roll bar that is also increased in diameter and stiffness. This in turn allowed engineers to reduce the front spring rates, giving the Everest a more comfortable and pliant ride.

The outgoing model used one set of damper setting across the range, however in the new range these settings have been tailored specifically to each model, taking the weight of the various derivatives into account, this in turn improves ride characteristics and handling. These suspension refinements also meant that the recommended tyre pressures could be lowered slightly, further enhancing the overall plushness of the ride.

These improvements were immediately noticeable on the dirt roads and tracks that took us from the Khai river up north to the Makgadikgadi in the south.

All Everest 4×4 models are equipped with Ford’s seamless and intuitive Terrain management system that facilitates easy switching between Normal, Rock Crawl or Mud and Sand modes, which tailor the electronics to suit the driving conditions.

Driving in a large convoy and sticking to the speed limit can be tricky but fortunately the Everest continues to be offered with Adaptive Cruise Control with Forward Collision Alert. It helps maintain a pre-set cruising speed, as well as a pre-set distance from the vehicle ahead. A new featue of the system enables the recognition of pedestrians, in addition to vehicles, ahead by means of the radar sensor.

If the gap to a vehicle ahead reduces the Everest automatically slows and then accelerates back to the pre-set when the road is clear.

On the eve of the 50th anniversary of Apollo 11 rocketing onto the moon for what would be one of mankind’s greatest adventure. I was back in this place, which has an uncanny resemblance to the surface of the moon.

This is a place that kickstarted my yearning for adventure and always has me keeping one eye on the door and another on Google maps. Some call it Wanderlust. I call it the pans effect.

There is a place called Makgadikgadi. This is that place

Nestled between the Okovango Delta and the Kalahari are the Makgadikgadi salt pans. Consisting of two large pans and a number of smaller ones the are is basically the same size as the entire Italy. It is a fascinating place with a interesting mix of geology, wildlife, vegetation and climate. The pans flood during the summer months, attracting various wildlife including large flocks of flamingo who choose to breed here, fefore draining into the Okavango Delta

As a young motoring journalist, I first made the journey here on an adventure motorcycling trip. It was a world unlike anything that I had ever experienced before. Camping on these pans is a surreal experience, the eerie silence and deafening beauty, amplified by a night sky that is illuminated with a million stars. It is a special place and a place that I was very excited to return to.

Driving on the pans is an interesting experience. Under a thin crust the surface is alomost always moist and travelling across the surface during my first visit was hugely entertaining. Twisting the throttle on a high powered adventure bike saw us traverse this unique surface in spectacular rooster tail fashion, the lightweight nature of a motorcycle ideal for these conditions. This time around I was behind the wheel of a large SUV and even during dry periods the surfaces need to be handled with caution. As you can quickly find yourself in a wet patch and stuck properly. We elected to stick to the drier, edge of the pan this time around as our visit was brief and we didn’t want to spend it digging out an Everest from the salt.

It is entirely possible to drive a cross the pan, but I would suggest sticking to the tracks if there are any as this gives a good indication of where the dry parts are. It is also a good idea to travel in a small convoy, so if you do end up stuck in a wet patch your mates can aid in pulling you out.

Our visit to the pans was brief but remarkable and if you have never been it is definitely a location that every outdoor enthusiast should experience atleast once in their life. Botswana lifted the ban on elephant hunting days before our trip, so who knows how long this country will remain as wild and beautiful as it is.

Spending a couple of days behind the wheel of the Everest also had me wondering why it isnt more successful. Just like the Makgadikgadi pans, the exterior might remain familiar, but under a thin layer is a whole bunch of surprises, including all the latest technology and state of the art, powerful, yet efficient engines. 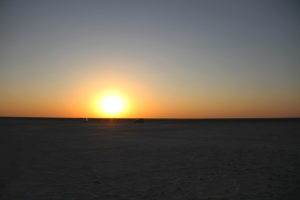 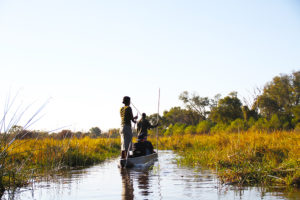 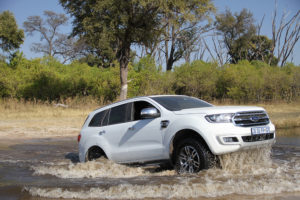 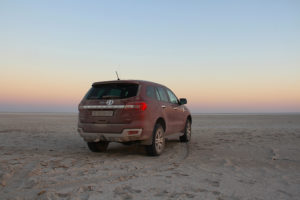 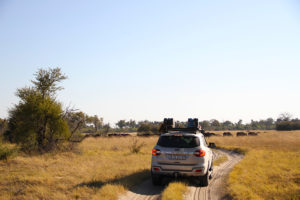 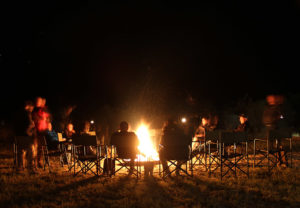