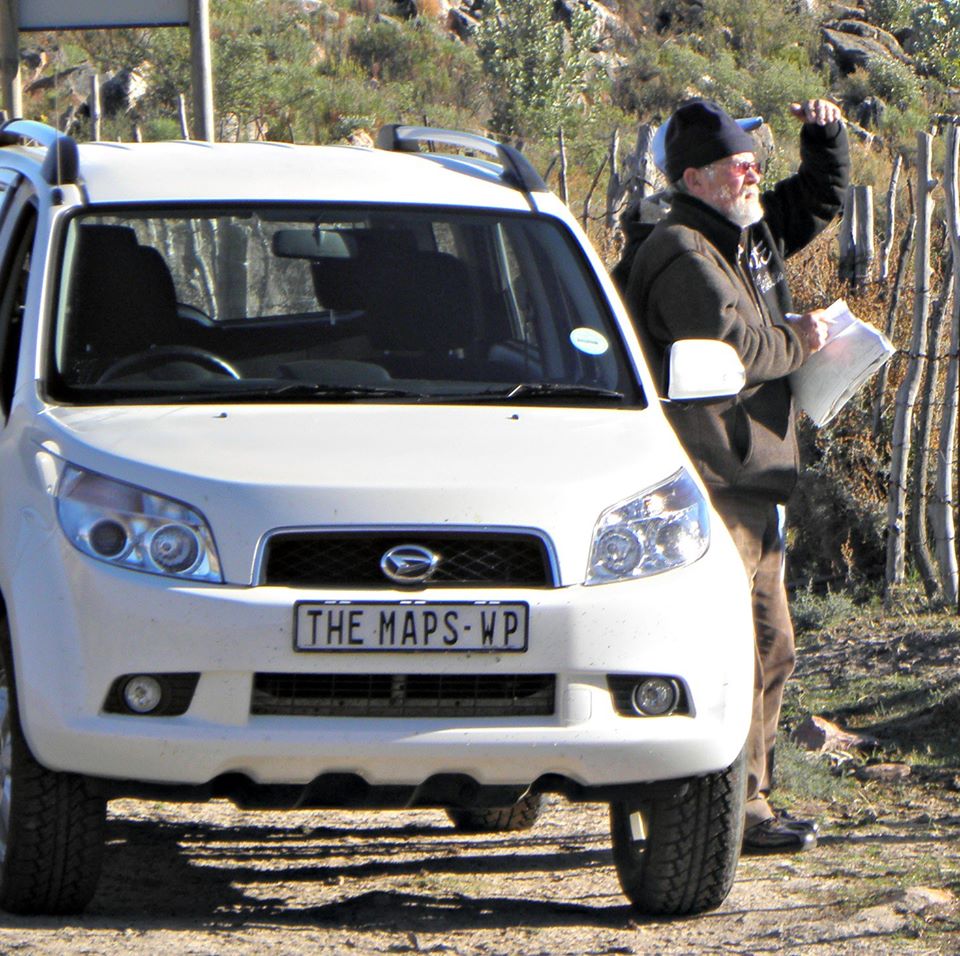 If you’ve ever embarked on a hike or a road trip in the Cape, chances are you’ve used a Slingsby map. But Slingsby maps aren’t just about getting from A to B; there’s a world of side roads and secret destinations out there that Peter Slingsby is inviting you to explore. He did. What’s stopping you?

If there’s a road on a Slingsby map, Peter Slingsby has driven it. If there’s a hiking trail on his maps, he’s walked it. Today the Slingsby map collection numbers more than a dozen, with a few books thrown into the mix, too. This is a chap who has got around. We caught up with Peter at his home in Cape Town.

What car do you drive?

We’ve recently acquired a Honda BR-V which we like a lot. We don’t like to have something that can handle roads that are too rough because then we tend to research areas that people in ordinary cars can’t get to.

What is the favourite car you’ve owned or driven?
A long wheelbase Daihatsu Terios. It could do anything: it was 4×4, no complications, light. Okay, it wasn’t too powerful… you couldn’t tow (I don’t think) but hell that car went anywhere.

If money wasn’t a factor, what car would you be driving?
I’d drive a Discovery. I don’t like the new ones so much, but the old ones (sighs). There’s something very iconic about the old Land Rovers isn’t there?

How did you get into making maps?

Long story: going back to student days, back in the ’60s, going on hikes in the mountains with friends, there were never any decent maps. We went on a trip to the Ceres Mountains, we were the first group in after the earthquake (we had a lot of adventures with rockfalls tremors, aftershocks and there had been a lot of fires).

I drew a map of our trip, with little notes on it, a little arty thing. My father had an old-fashioned plan copier, he was a builder and I made copies for my mates, they’d chuck ’em on their walls, in student digs and whatnot. Then other people wanted copies because they wanted to do the trip. So I redrew them without the personal comments on the side and I sold them for something,

I forget, 50 cents maybe. And that was my first commercial enterprise (laughs).

Have you ever been tempted to do more maps, to branch out further up the country?

Yes, we were, for a long time. We used to do a lot of contract work – which is great, it’s profitable – but then you don’t build up a portfolio of commercial products that way. To keep us going in the lean times,

I said we needed to have at least 10 titles. Then we found that I started to get increasingly bogged down with revisions. Unless I took on staff, I wouldn’t be able to handle more than the 10–15 maps. And we weren’t keen to do that.

The other problem is, once you go outside your area, it becomes harder to market. So we decided, in the end, the furthest map we’d do is the Wild Coast.

Are you still hiking and exploring?

I’m not hiking much anymore, I have artificial help now (pats his heart) so I have to be a little more careful. Ja, I did an interview a while ago and was asked why is hiking is so important to me? and I realised that hiking is central to everything I’ve ever done. We still get away, though. My wife and I made an agreement recently that we’d go away once a month… and that’s what we do.

What are some of the more remarkable places you’ve visited?
There are places with very funny names. The funniest village I’ve come across was a place called Guava Juice between Storm’s River and Humansdorp. That’s its official name.

The Tankwa area fascinates me, there’s some remarkable country out there, some of it is bloody difficult to access. It’s rather extraordinary to think there are places
a few hours from Cape Town, where there is nobody living within 40km. We went out there a while back, it was winter, we had no extra bedding or anything and I thought later: if we’d broken down, we’d have been in serious trouble.

That kind of place is intriguing; we’re always drawn to places like that.

What has been your scariest moment?

We were up in the Nieuwoudtville area, there’s a long piece of the Bokkeveld Mountain. In the end, there’s this little Mountain Pass called Die Hel, and we came out of the bottom and suddenly the ground we came out on was like quicksand. We really were 50km from anywhere and the car started to sink and I just put foot. We tore across. It must have been some mountain sleet that came down the mountain – it had been raining a lot – and I reckon it had all turned into jelly-like stuff. We just keep going until the road rose, up onto an embankment. We looked back and saw we had left really deep tracks behind us and

I thought if we’d got stuck there, we were in deep trouble, we wouldn’t have got out. We had no water and we would have had to walk an impossible distance to get help.

Apart from mapping the areas you have, have you done much travelling?

What defines an adventure, for you?

Well, I think it’s a different experience. A trip somewhere different is an adventure because everything is new and strange, you’re experiencing a different culture, you’re going to see things that you’ve not seen before. Lots of the hikes I’ve been on have been highly adventurous in terms of not just the experience of being there but what you might come across: animals, snakes, spiders, scorpions.

Any words of advice for armchair travellers to get them motivated?

Yeah, you should get good maps and study them! That’ll make you want to get out there and explore.

I joke but some years ago I gave a friend of ours a copy of one of our maps hot off the press and she gave me a call afterwards to say thank you. “I’ve been sitting down with it for the last two hours and I just finished reading it,” she said. Fantastic! That’s what we’re trying to do with maps. A lot of maps are just diagrams really, they show you how roads connect but nothing about what’s in-between. For me, the fascination is you’re driving down a road and you see all these turnoffs with names and you think: ‘Where the hell are these places? What’s there?

Going down those roads you find they really are interesting, very often.