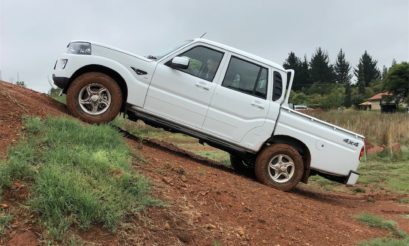 The Mahindra Pik Up is a bit of an anomaly in the bakkie world, mostly due to the responses it elicits from the social media crowd.

Usually when you post something about any other bakkie, a selection of both positive and negative comments follows. These comments usually focus on the longevity of said product and why another product is far superior. Cue to and fro arguments for roughly 24 hours.

With the Pik Up its different. Usually when a post about the Mahindra goes live, the first question is always about the automatic version and whether it exists. And if it does exist, how long do we have to wait? After that it’s usually a burst of positive comments from people who already own a Pik Up and want to tell the rest of the world how happy they are with it.

Well, have we got news for you. The Mahindra Pik Up does exist, we’ve driven it and it will be available to purchase from January 2020. In doing so, Mahindra finally takes the fight to the big boys in the leisure double cab segment, where the automatic gearbox reigns supreme.

Unfortunately for the Mahindra, it can no longer claim underdog status. In November it outsold a number of other famous bakkies, including the Amarok, Navara, Triton and, wait for it, the Toyota Land Cruiser…

With an automatic gearbox in the mix, we reckon Mahindra could easily improve its average monthly sales figure of 260 by at least 50%. The leisure double cab segment accounts for a huge chunk of monthly sales and the Pik Up is uniquely positioned in its own little sub R400k niche. Yes, we know the GWM Steed and JMC Vigus exist, but the Pik Up is a vastly superior product as its average sales have proved thus far.

With that out of the way, let’s focus on the new transmission.

Well, we can tell you that it’s a smooth, refined unit. So much so that you soon forget it’s even there, which is exactly what most people expect from an automatic. On the open road it soon fades into the background. In town and at slow speeds it fares equally well and is easily on par with the six-speed ‘box found in the Toyota Hilux and the six-speed in the Mitsubishi Triton.

Obviously, the automatic transmission makes off-roading easier as well. We spent a decent amount of time on Mahindra’s extremely muddy off-road training course to see if the ‘box is any good when the going gets tough.

We’re happy to report that it does just as well on a tight, technical route. Its abilities expand beyond what the average customer will ever likely attempt.

We feel obliged to mention that this bit of off-roading gave us the opportunity to test Mahindra’s automatically locking rear differential. This Eaton unit has let us down on two occasions this year on the manual version of the Pik Up, so we were keen to see whether the automatic had the same problem. It’s supposed to engage automatically when there’s a 100 r/min difference between the rear wheels.

We intentionally put the Pik Up through the toughest axle twister we could find and repeated the process three times. By the third round, we felt comfortable enough to accurately predict when it would kick in. And when it does, you can hear and feel it, making it a pleasure to use.

The automatic gearbox isn’t the only new fitment to the Pik Up. We also spotted a hill descent control button and a button to override the electronic stability control. These are both new features. The latter will undoubtedly make the Pik Up easier to drive on gravel, while the former proved easy to use thanks to having a set speed which felt slow and safe. We also tried going downhill using compression only, but it went down slightly faster than we prefer. It has to be said that the conditions were extremely tricky, so we’d like to revisit this particular test when the weather is better.

Overall the Mahindra Pik Up remains a superb product, made even better by adding an automatic gearbox. Depending on what the final specification is, the automatic might just be the pick of the range. A mid-grade Karoo S6 with an automatic transmission for less than R400k, or a top-spec S10 with all the bells and whistles for just over R420k would still be around R130 000 to R150 000 cheaper than their nearest rivals. And we’re not even comparing apples with apples here. We’re comparing the Pik Up, with all its luxuries and standard features to entry-level models from Japan.

Unfortunately, we can’t provide you with finalised pricing and specification. There are only two units in South Africa at the moment and Mahindra is still in the process of ironing out the details for the launch in January. It’s highly unlikely it will shy away from its ethos of offering decent cars at a decent price, so we’re not expecting a huge increase.