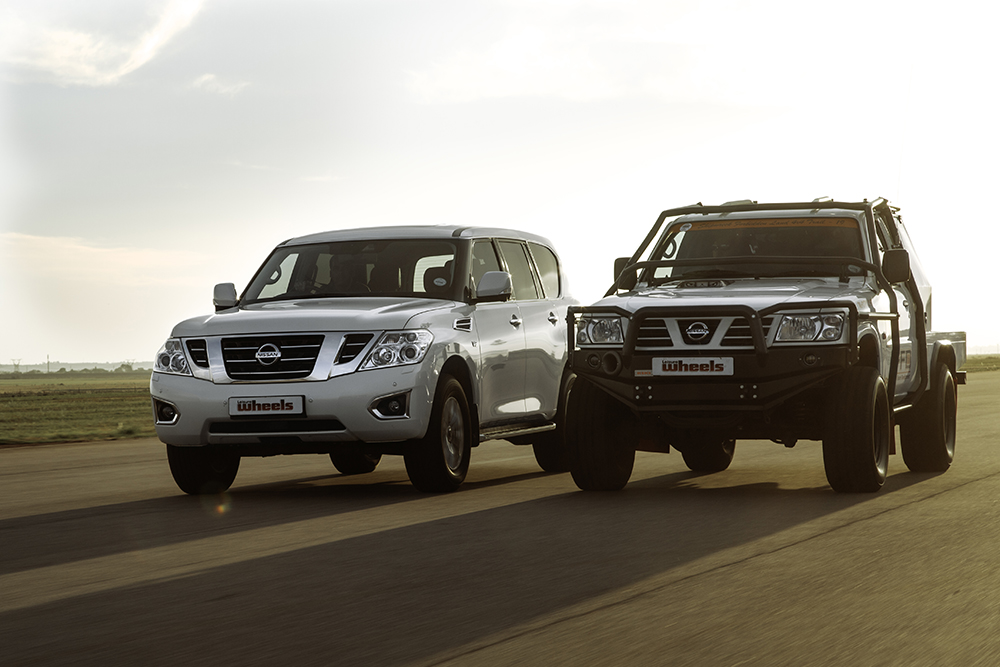 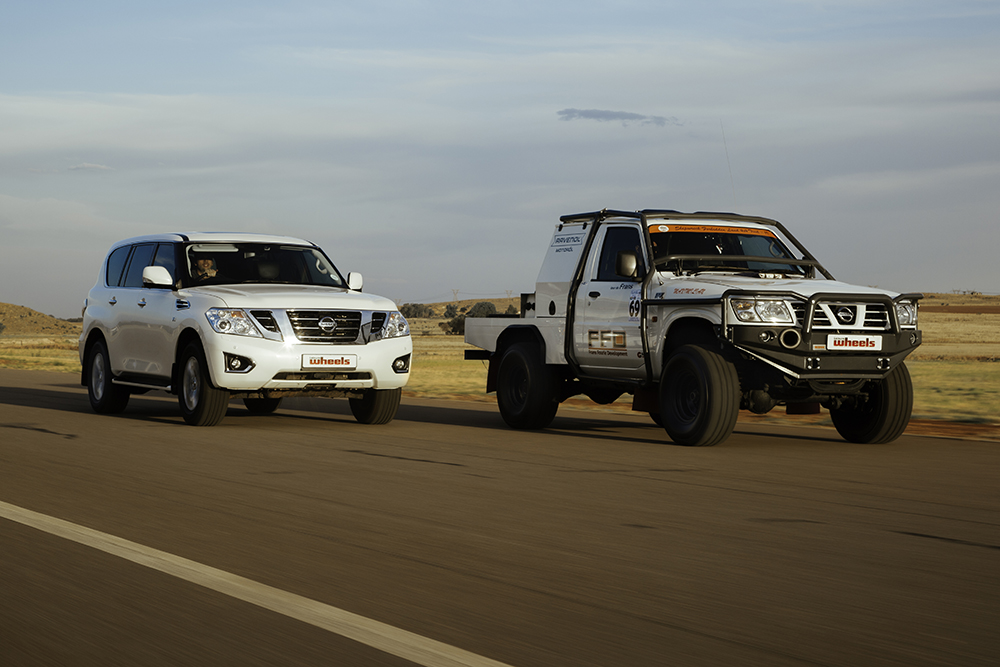 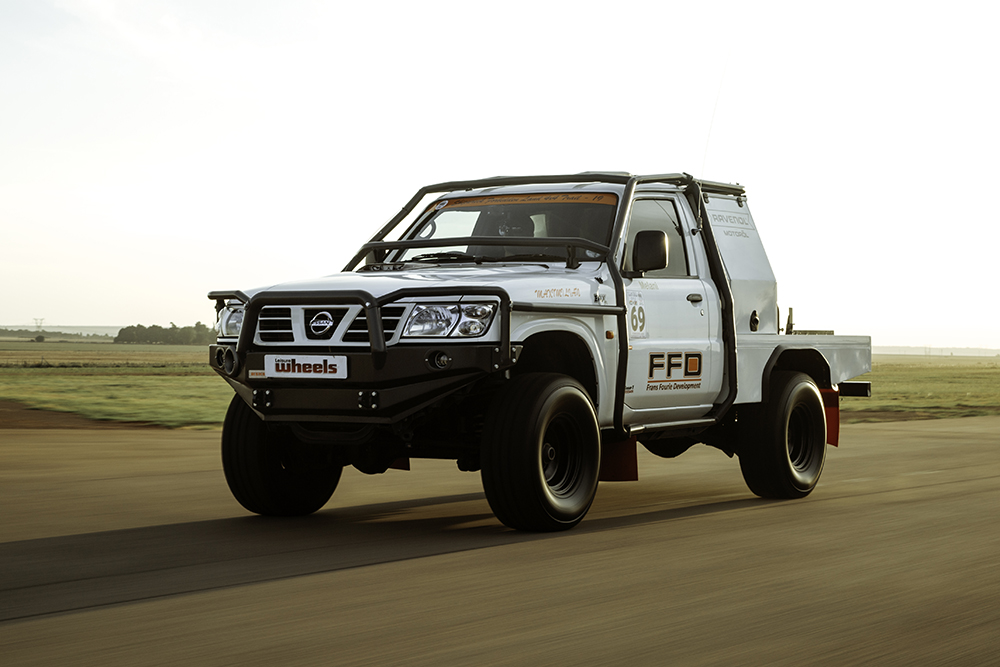 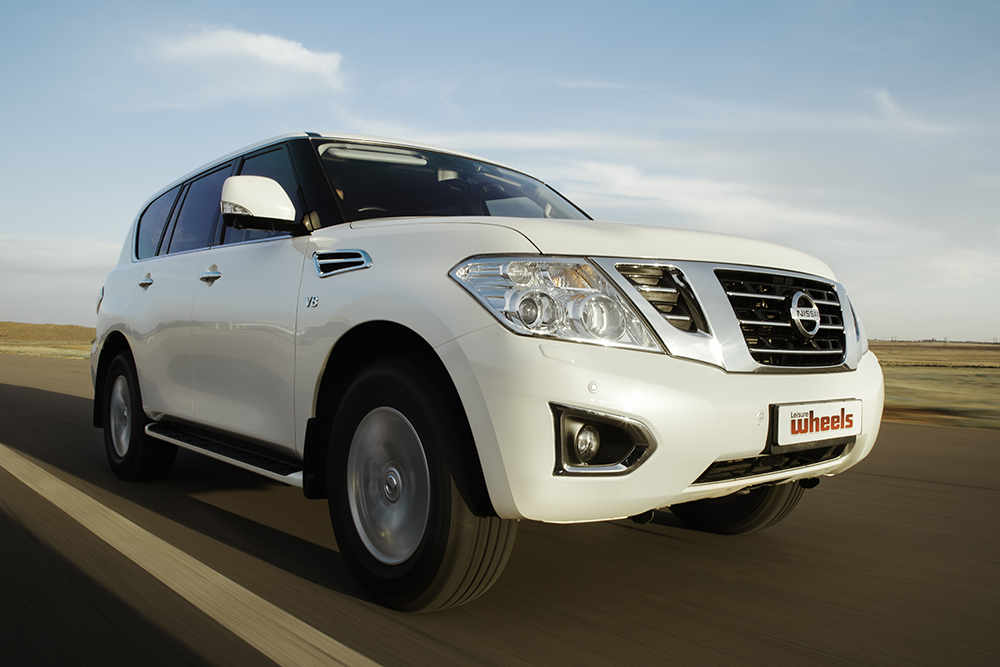 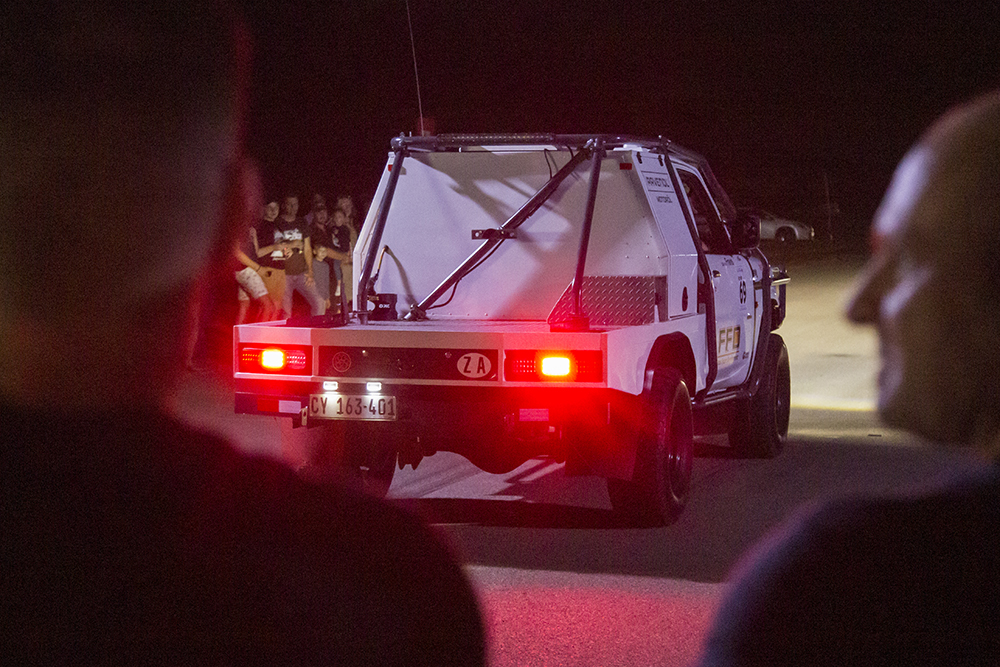 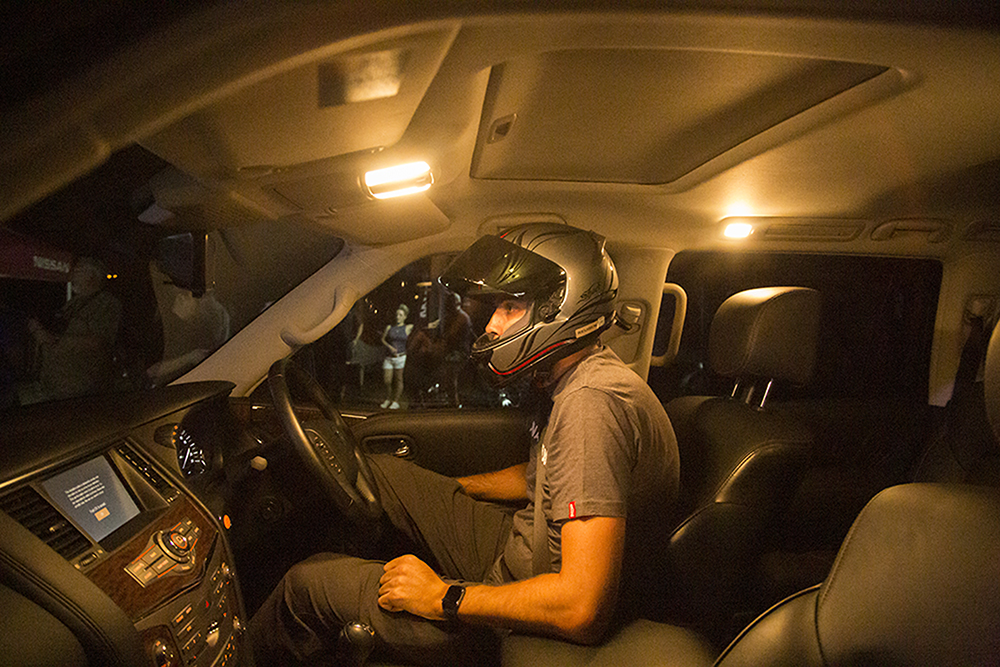 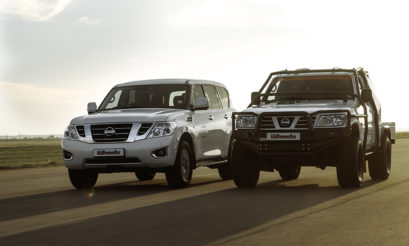 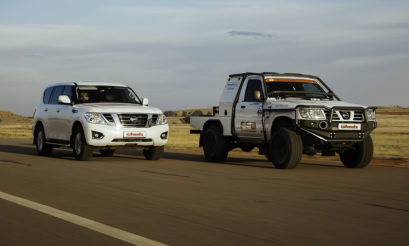 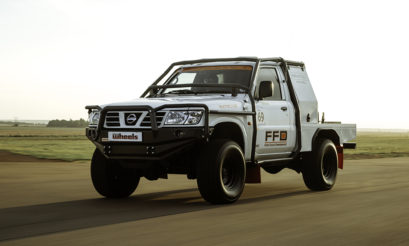 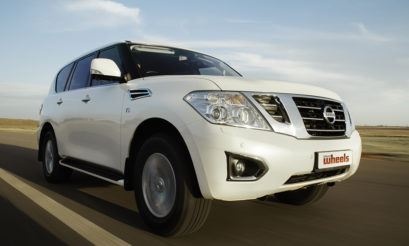 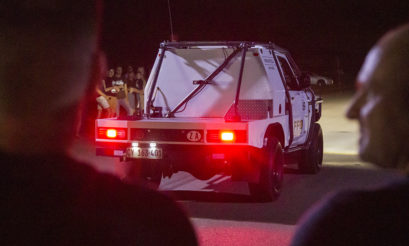 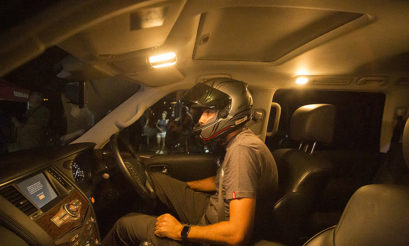 Drag racing and a Nissan Patrol? Not the likeliest of combinations, but a whole heap of fun.

A Nissan Patrol is a pukka off-roader, with 4×4, low range and big tyres. They are legendary in the overlanding world no matter the model. So in theory, they don’t really belong on a drag strip.

So what am I doing at a drag racing event? In a Nissan patrol? A stock Nissan Patrol. Well, the Y62 has a V8 under the bonnet. Producing 298kW and 560Nm, it has plenty of grunt. Enough to embarrass a couple of hot hatches right? Well, there are no hot hatches around on this particular evening. Just fast Nissans.

These events are the brainchild of the GTR and Z Club of Southern Africa. Its members were looking for a safe and legal environment to race against each other and start a list. They call it Club 23 Outlaws.

The Patrol is also a favourite among owners who like to tinker. Remember that white SUV that gained infamy on YouTube by making Richard Hammond, who happened to be driving a Porsche 918 Spyder, look silly? That was a Patrol with a heavily modified Nissan GTR engine under the bonnet, riding on super sticky slicks. The stock Patrol drivetrains can clearly handle a ridiculous amount of horsepower.

And while the choice of engine might differ, the thought process remains the same. Build the baddest, fastest Nissan Patrol you can. Seeing that this trend has caught on in South Africa, the club invited the Patrol owners along to come and see who is the fastest and to start their own list. Nearly 30 Patrols arrived, in various state of tune and modification for a bit of fun down the strip.

Not wanting to miss out on the fun, I commandeered the latest in the line of Patrols, with that V8 under the bonnet, to see how it would fare against a barrage of modified machines.

To be honest, I didn’t know what to expect, we were told to bring a helmet along and meet at the Rhino Park airfield on a Thursday afternoon. We arrived before sunset but the runway was off limits, with aeroplanes still coming in to land. Finally, we received the go ahead and the team started setting up.

A large trailer was unfolded, generators fired up and the cars started arriving. Lights, a scoreboard and a PA system suddenly appeared. The club members brought everything they needed to run the event in a single trailer. Although this particular event was for Nissan cars only, enthusiasts arrived in their droves, which is quite remarkable given the fairly remote location between Pretoria and Cullinan.

The 200m strip favours all- wheel-drive cars like Nissan’s mighty GTR and, of course, the Patrol. Starting is via the flick of a torch light and LED lights at the end of the strip illuminate as the winner crosses, no times but immediate satisfaction and a slick running event.

In order to improve your ranking on the list, a driver needs to challenge the next fastest car and beat it in order to advance. It is a system used by drag racing enthusiasts the world over and was thrust into the public domain by TV shows like Street Outlaws. Match-ups are drawn via poker chips and displayed for all to see on a white board.

With the first round of match-ups organised, I took the time to start checking out the competition. These are lift a wheel in the air on mud terrain kind of Patrols. But how? Well, engine swaps seem to be the order of the day. The Chevy small block is a popular choice in various sizes and, as if that wasn’t enough, a couple of the cars here have a blue bottle or two on the back. Yep, nitrous oxide. For that extra bit of oomph if needed.

Llewellyn Edwards has built a great variation on the sleeper theme. His 1995 Y60 short- wheel base Patrol is neat and with tasteful exterior modifications. Featuring a two-inch suspension lift and a two-inch body lift and riding on 35-inch Cooper tyres on aluminium bead lock rims, this Patrol looks ready to tackle anything. To the unsuspecting passerby it looks just like that: a neat little Patrol with some tasteful modifications.

The Y60 was mechanically rather different than its predecessors as it was the first Patrol with coil spring suspension, which increased comfort and rough ground handling and the wagons featured a five-link set-up at the rear. This model was originally available with a variety of petrol and diesel engines, the most powerful featuring 135kW and 350Nm and while that was sufficient in 1995, it never did offer rapid performance.

But under the bonnet of this impressively restored example, it is a whole other story and the only hint are the subtle M57 badges on the bonnet and side flanks. For some, that might give the secret away but for those who don’t speak in code, M57 is the code given to BMWs three- litre turbo-diesel engine. While in the process of restoring his SWB, Llewellyn had the opportunity to drive a BMW X5 fitted with this powerplant and immediately fell in love with the way it doesn’t drink fuel by the litre and how it delivers its power. There and then he decided this was the powerplant he wanted under the bonnet of his Patrol.

There was only one problem: this engine swap had never been done. That did not deter Llewellyn who promptly imported one of these powerplants and started getting it sorted.

A bespoke adaptor plate was manufactured by a local engineering shop, allowing the German engine to mate with the standard Nissan gearbox and drivetrain.

The biggest challenge was the electronics. As you can imagine, the BMW engine relies on myriad sensors throughout the vehicle for all the complicated electronic systems to work in harmony. But perseverance paid off and soon the engine was brought back to life thanks to a custom wiring harness. Internally, the engine remains unchanged and it still uses the standard turbocharger but an aftermarket engine management system allowed the engine to be retuned specifically for this application and it now pumps out 227kW and 760Nm, quite an improvement over the original.

This is not the craziest conversion out there, Llewellyn built this Patrol as an all-round vehicle that can be driven on the street or tear up the dunes at Atlantis. Even so, it was one of the fastest Patrols on the night and U-turns during the photo shoot on the runway saw it easily lift the front wheel as it came onto boost. The vehicle seems to be extremely user- friendly while at the same time is a hoot to drive.

Llewellyn has executed the sleeper theme perfectly, line up against this little Patrol at your peril.

The Club 23 drag racing event works on a round-robin knockout principle, matchups are drawn via numbered chips and the winner moves onto the next round, the loser goes home.

In the standard Y62 V8 Patrol, contrary to our expectations, we ended up doing remarkably well, making it to the second last round where we were finally eliminated.

I’m not a bad loser, you understand, but the new Patrol is pretty quick so I needed to get a closer look at the car that made me look slow.

Dubbed Tour de Frans and owned by Frans Fourie, this Patrol started life as a 2009 Pickup. Over the last three years, he has transformed this humble workhorse into his version of the ultimate overlander.

This Patrol has also received an engine swap, with Frans deciding on a LS3 Corvette engine. While these make good power in standard form that too was not enough.

The LS3 is a popular choice for engine swaps in all kinds of vehicles. In standard form, they are really strong and can take the punch when modified. When things do go wrong, they are relatively cheap to rebuild and parts are readily available. And 6.2 cubic inches ensure plenty of low-down torque, perfect for its intended use.

All the internal parts were replaced with upgraded components to increase the power output to 430hp, as the Yanks would call it, that’s 320kW. If Frans finds himself in a situation where that is not enough, there is a healthy dose of nitrous oxide that further increases the power to 550hp or 410kW, situations like embarrassing a brand-new R1.5 million Patrol, or climbing ridiculously steep dunes.

The 410kW in a vehicle like this may seem like overkill but if you consider that it weighs around 3 500kg when loaded with fuel, water, gear and passengers, we agree with Frans that it is actually the right amount of power. Oh, and it is naturally aspirated so it sounds absolutely amazing.

As this vehicle was originally a bakkie it had leaf spring suspension. That has been removed and replaced with a custom rear suspension that utilises Old Man Emu coil springs and Fox racing single bypass shocks.

But why build a vehicle like this? Frans likes playing in Namibia, home to some of the biggest dunes in the world and climbing these dunes needs all the horsepower you can get.

In fact, the added horsepower is only one part of this build. The vehicle was built entirely to cross the desert with ease. When on dune duty, it runs on 35-inch wheels, not the ‘small’ 33s fitted on the day of the photo shoot.

The bakkie load box has been removed to make way for an external roll cage and cargo hold which is home to gas for the geyser and shower, clothing and a fridge as well as two bottles of nitrous oxide, the big ones. On trips, a roof- top tent provides comfortable accommodation. Underneath is a 100-litre water tank and a 320-litre fuel tank. Frans went this route as he is not a fan of carrying a bunch of jerry cans and this way he can travel from LÜderitz to Walvis Bay, through the dunes, on one tank.

An external roll cage was chosen as it means the interior remains uncluttered and if the vehicle should roll over in the dunes, the body remains intact, enabling the vehicle to be put back on its wheels and driven home. We think it looks pretty mean, too.

Frans in Tour de Frans ended up at the top of the Patrol list, showing every contender they had lined up against a clean pair of heels.

Drag racing started the day the second car was built and it remains fun. Especially on a short strip-like 200m, technique plays as big a role as the amount of horsepower you have under the bonnet, meaning it is not necessarily the car with the most horsepower that will come out tops, the driver’s reaction time is a factor, too.

I was mightily impressed with the Y82 Patrol, it held its own against some serious machinery and I really can’t understand why Nissan doesn’t sell more of these.

The match-ups and callouts continued until the early hours of the morning as enthusiasts enjoyed some good clean fun in a safe environment that is far enough from any residential area to be a nuisance. When the crowds started arriving

in their masses we thought it would be chaos but the event was extremely well run and everybody behaved. The passion the club and the vehicle owners have for their vehicles is evident and there is clearly a need for events like this. I had a huge amount of fun and will most certainly be back, hopefully, to improve my position on the list. 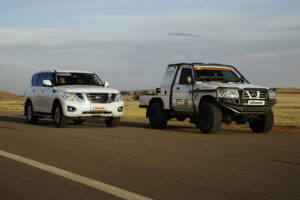 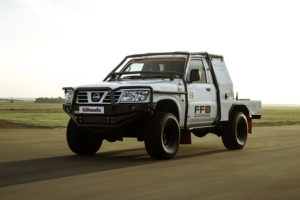 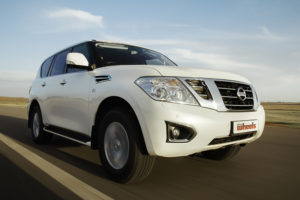 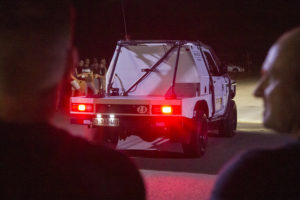 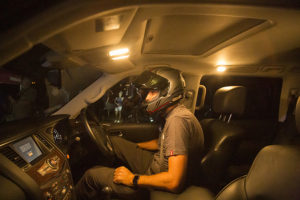 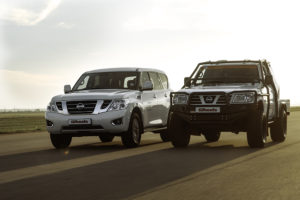