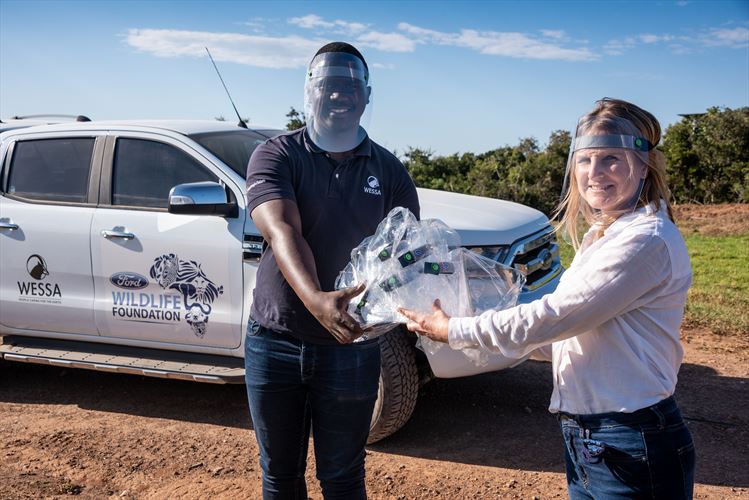 In support of the wide-ranging conservation and environmental projects backed by the Ford Wildlife Foundation (FWF), Ford Motor Company of Southern Africa (FMCSA) is distributing 1 100 COVID-19 face shields to 25 partner organisations located across the region.

“It’s fantastic to see our Ford employees making a difference in their communities through the production of the face shields, and we’re equally proud of our partner Ford Wildlife Foundation projects continuing to have a positive impact on conservation programmes during these challenging times,” says Neale Hill, MD of FMCSA.

“Protecting our precious endangered species and habitats is crucial, and the education programmes that support these initiatives is equally important,” Hill adds. “By equipping all of the FWF projects with the face shields we’re producing, it enables the teams to continue their commendable work while providing them with an additional layer of protection from COVID-19.”

To date, Ford has produced over 260 000 face shields at its Silverton Assembly Plant for frontline medical workers, essential services personnel, as well as non-governmental organisations (NGOs) that are at the coalface of this global health crisis. Almost 140 000 face shields have been donated directly to the Department of Health.

“Thank you to Ford for the donation of the face shields for all our Ford Wildlife Foundation projects,” says Lynda du Plessis, FWF manager. “These organisations are very excited to be receiving the face shields, as it will help keep them safe while interacting with communities and numerous role-players in their specialised fields.”

Since it was launched in 2014, Ford has assisted the numerous Ford Wildlife Foundation partner organisations through the loan of Ford Ranger Double Cab 4x4s for a period of two years, to ensure that they are able to carry out their work in even the most remote and hard-to-reach locations. A total of 25 Rangers are currently on loan, with a further 12 vehicles having been donated since the FWF was launched in 2014.

On the conservation front, the FWF partner organisations across the country include the Southern African Foundation for the Conservation of Coastal Birds (SANCCOB) which specialises in African penguins and sea birds; Endangered Wildlife Trust (EWT) that runs various projects on cheetahs and other carnivores, amphibians, as well as SA cranes and their wetland habitats; BirdLife South Africa which looks after threatened bird species; the Mabula Ground-Hornbill Project; Cape Leopard Trust; Overberg Renosterveld Conservation Trust; the Saving the Survivors rhino project; and the World Wide Fund for Nature (WWF) which is establishing a national grassland park in the Eastern Cape, and also runs the Black Rhino Range Expansion Project. FWF also supports the Namibia Nature Foundation (NNF) and its environmental projects in two conservancies in Khaudum North.

The FWF research projects include Sea Search which focuses on all types of marine mammals; the Oceanographic Research Institute’s coral reefs project which falls under the SA Association for Marine Biological Research (SAAMBR); the Knysna Basin Project; Southern Mozambique Sea Turtle Research Project; as well as the University of KwaZulu-Natal’s School of Life Sciences projects on vultures and hippos.

Although most of the initiatives incorporate education elements in their work, the specific FWF education projects comprise the Wildlife & Environment Society of South Africa (WESSA) which has programmes running in Gauteng, the Western Cape and Eastern Cape Wild Coast; the Lapalala Wilderness School in Vaalwater, Limpopo; as well as the Delta Environmental Centre in Randburg, Gauteng.

The FWF also donated face shields to the Buffalo Kloof Private Game Reserve located near Grahamstown. Buffalo Kloof has its own conservation projects for several endangered species, and is a partner to the WWF Black Rhino Range Expansion Project. The horns of its black and white rhino population have been infused with a red dye that is toxic to humans when consumed, which forms one element of its multi-faceted protection and anti-poaching efforts.

It also has wildlife relocation and reintroduction projects in place for elephants, cheetahs, leopards, as well as smaller species such as the Cape grysbok, spotted genet and honey badger.