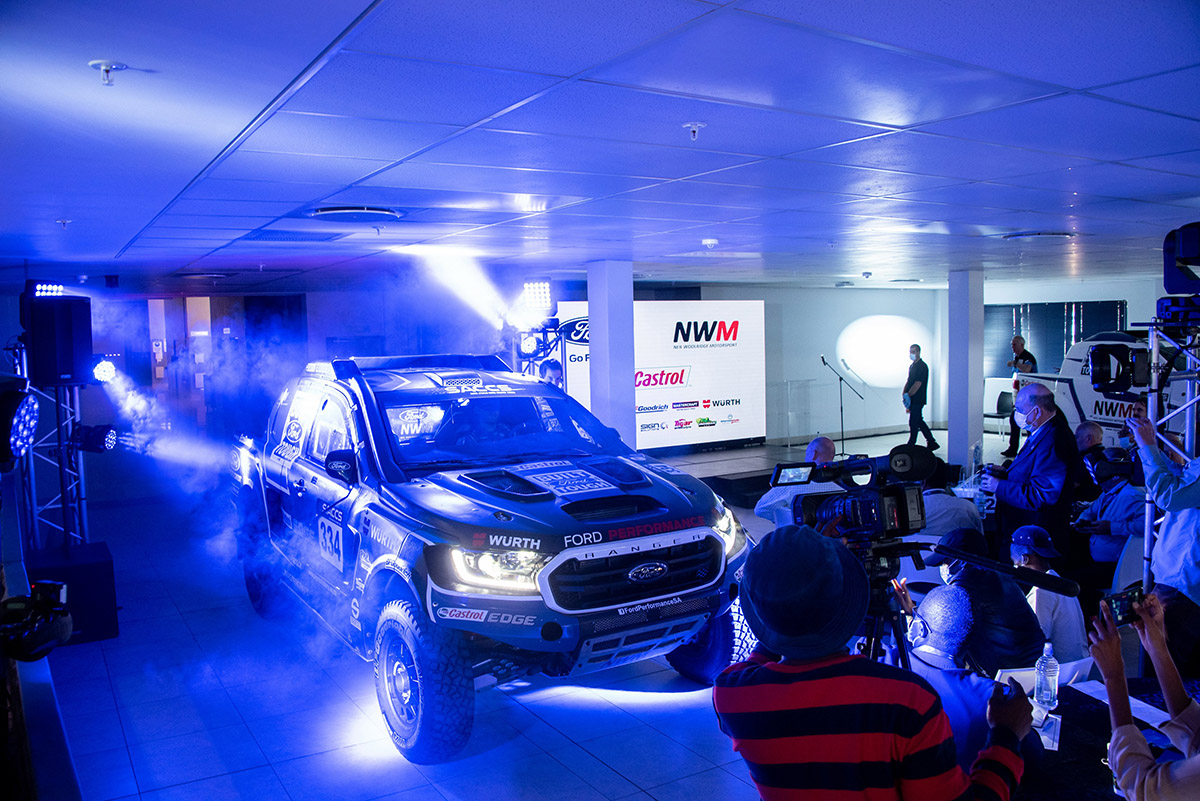 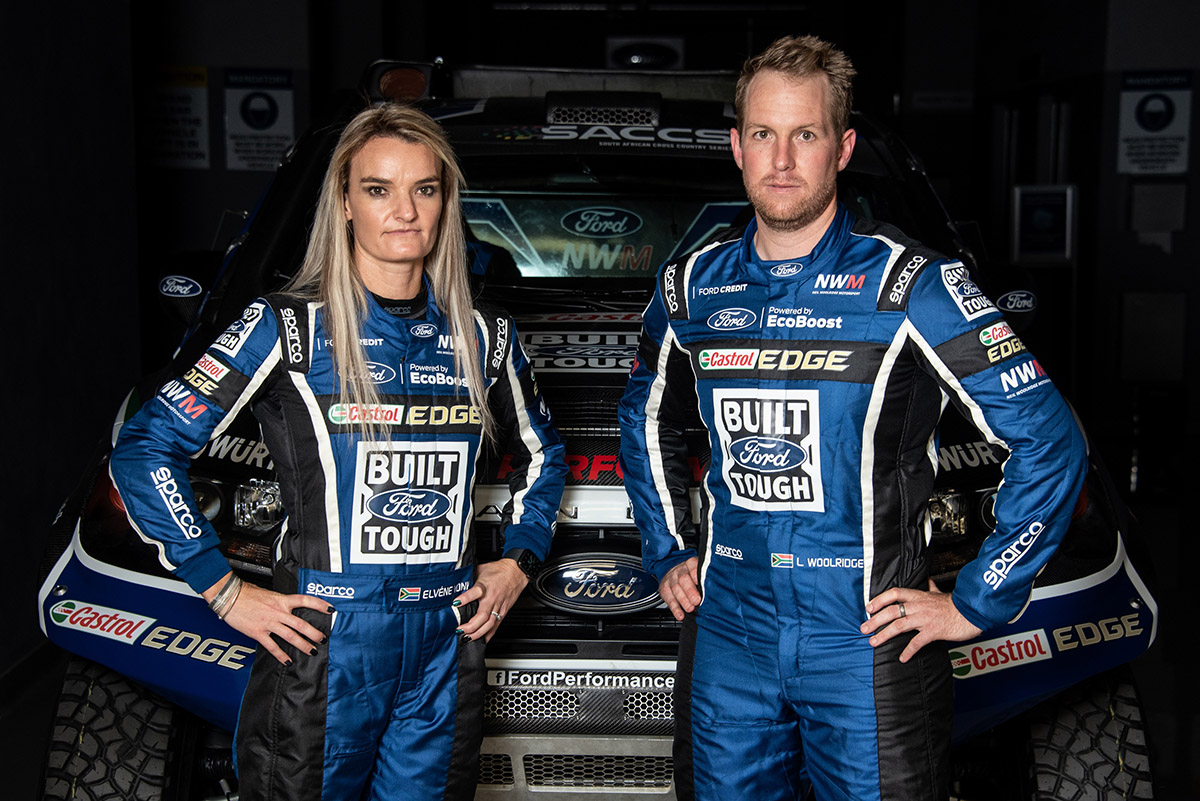 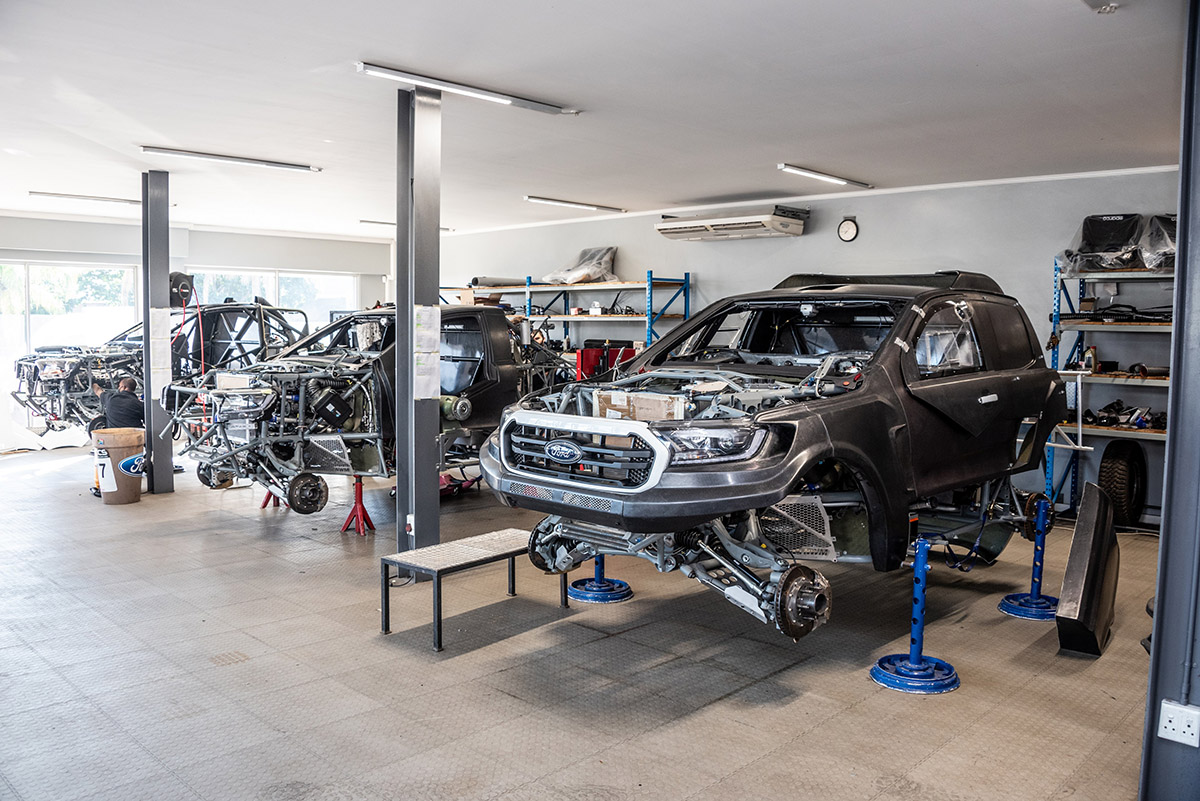 Neil Woolridge Motorsport has constructed 25 race Ford Rangers to date, and they have won championships both locally and in a number of overseas countries. Series newcomers in Class T for NWM in 20201 are navigator Fanifani Meyiwa and driver Wiseman Gumede. 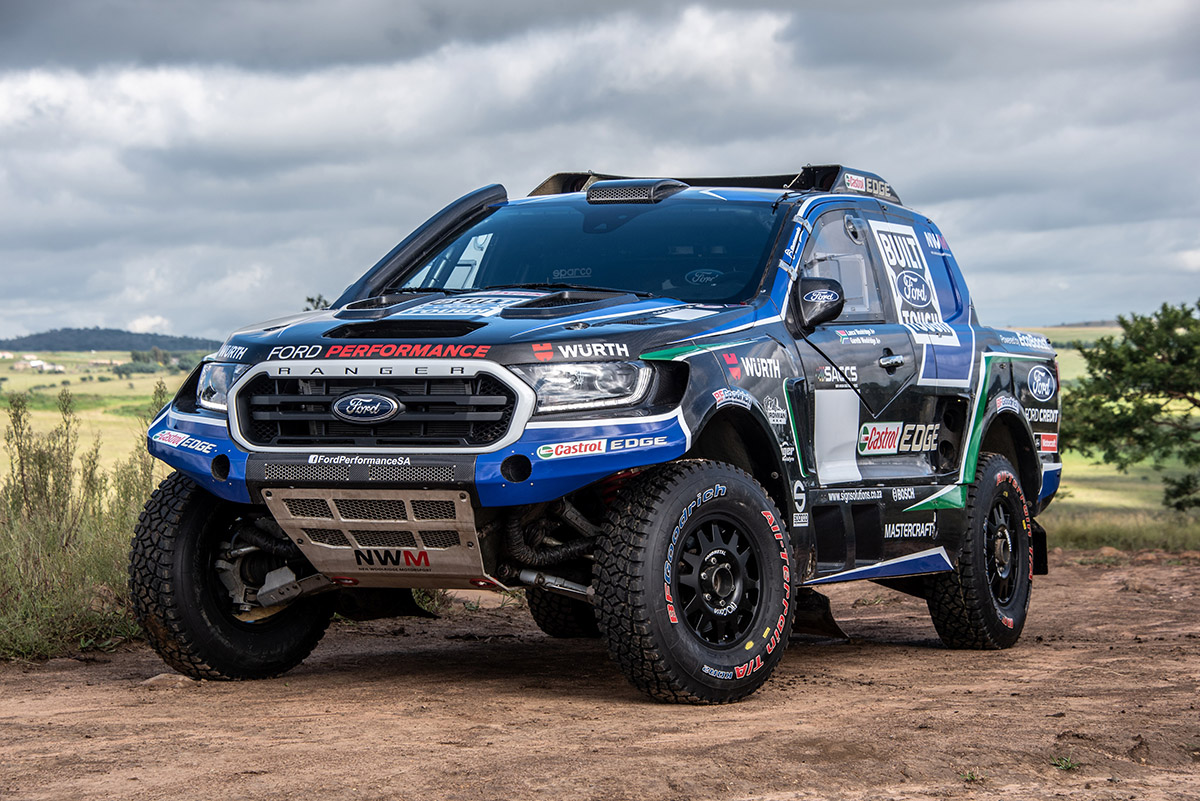 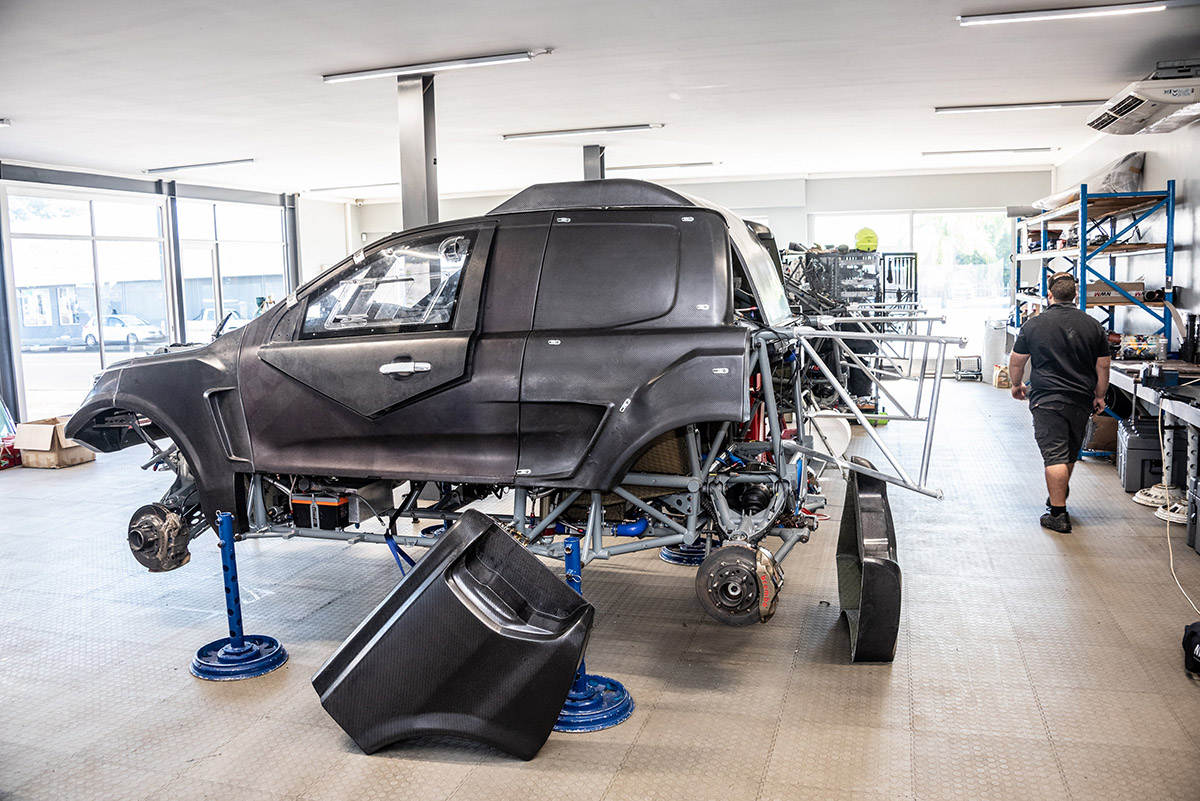 The carbon-fibre bodywork being trial-fitted to the tubular chassis. 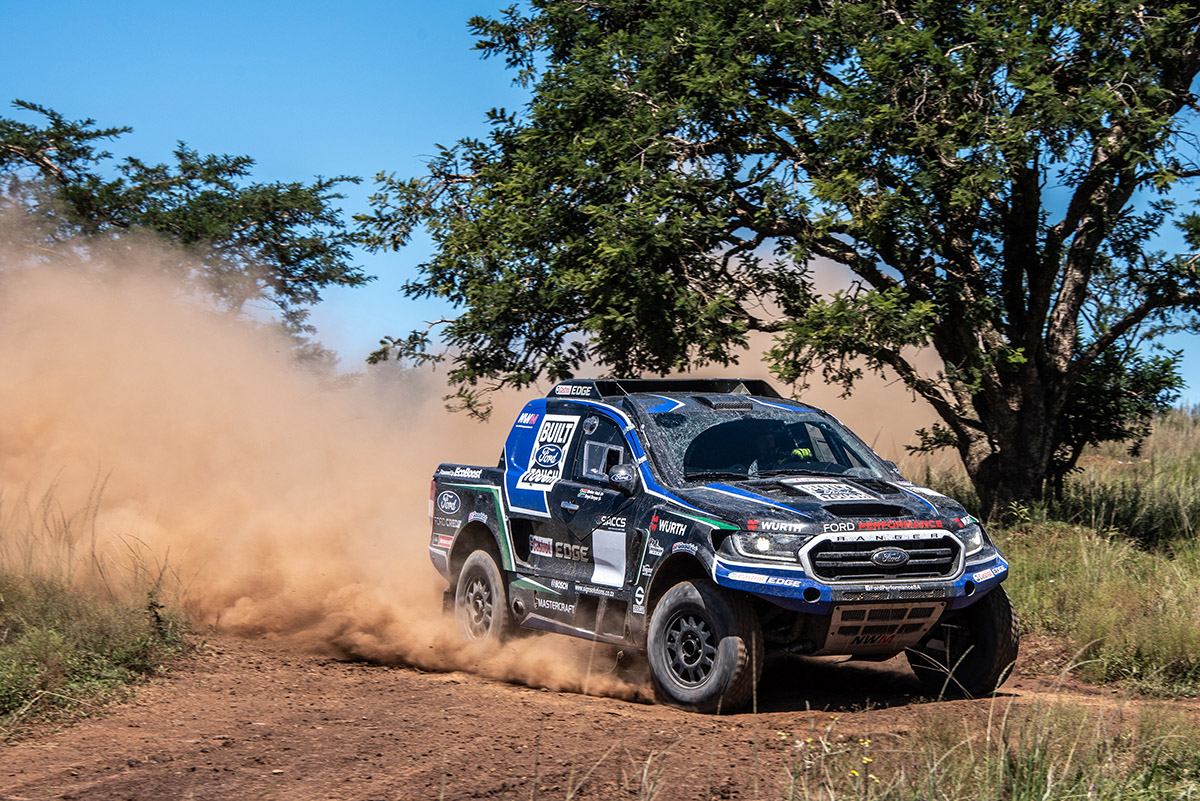 The new FIA class For Ranger will be the first V6 twin turbo petrol-powered vehicle in the category.. Last year the team campaigned a 5,0-litre V8 in Class T. 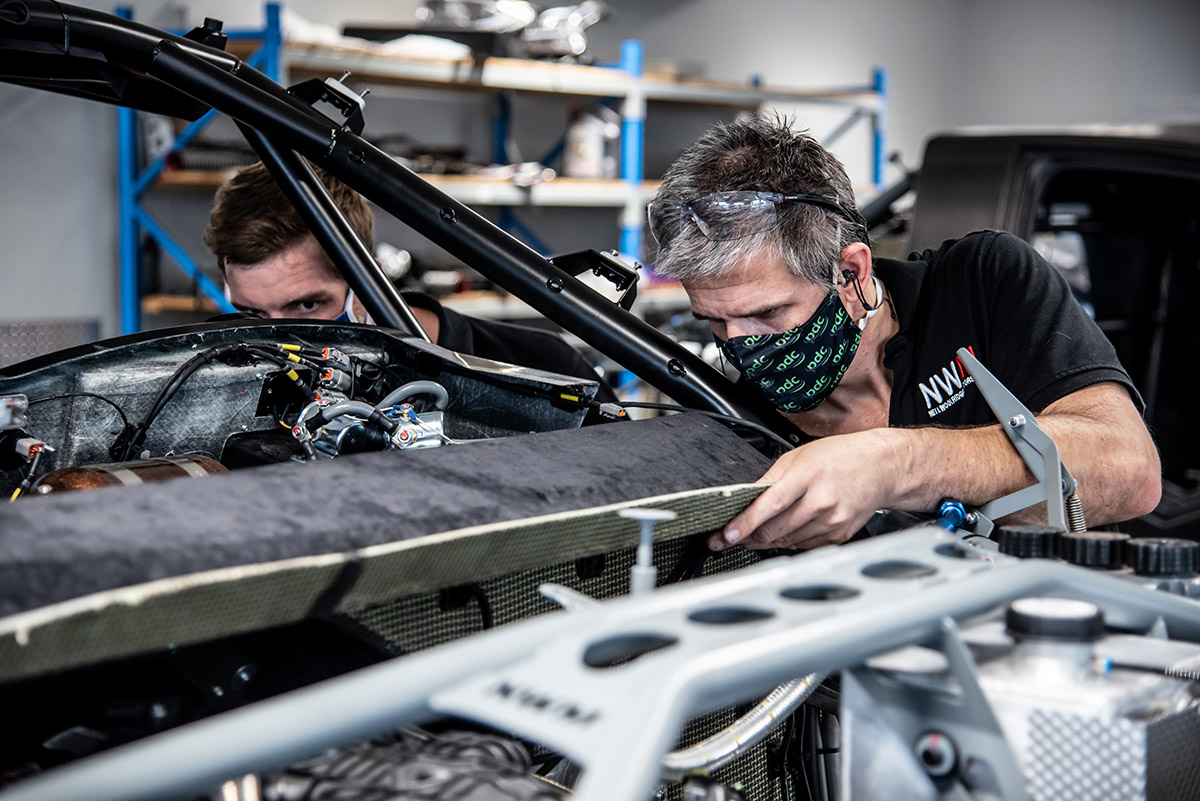 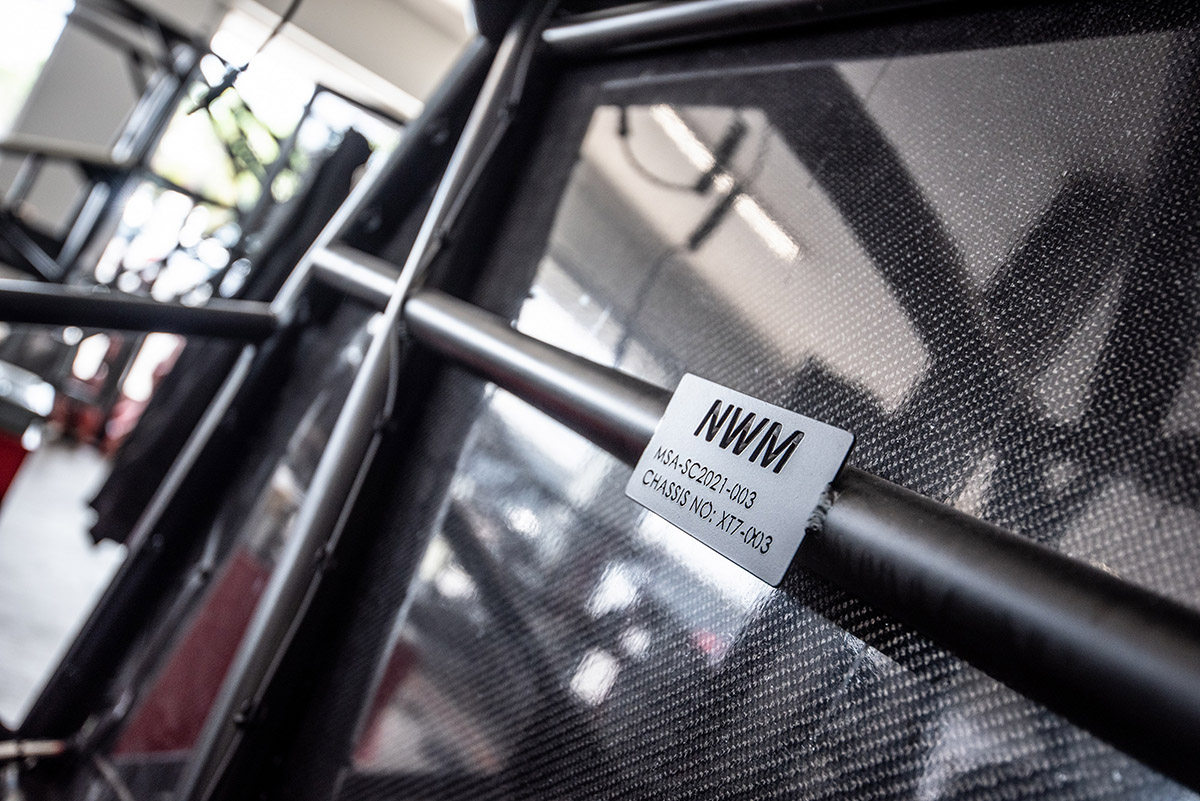 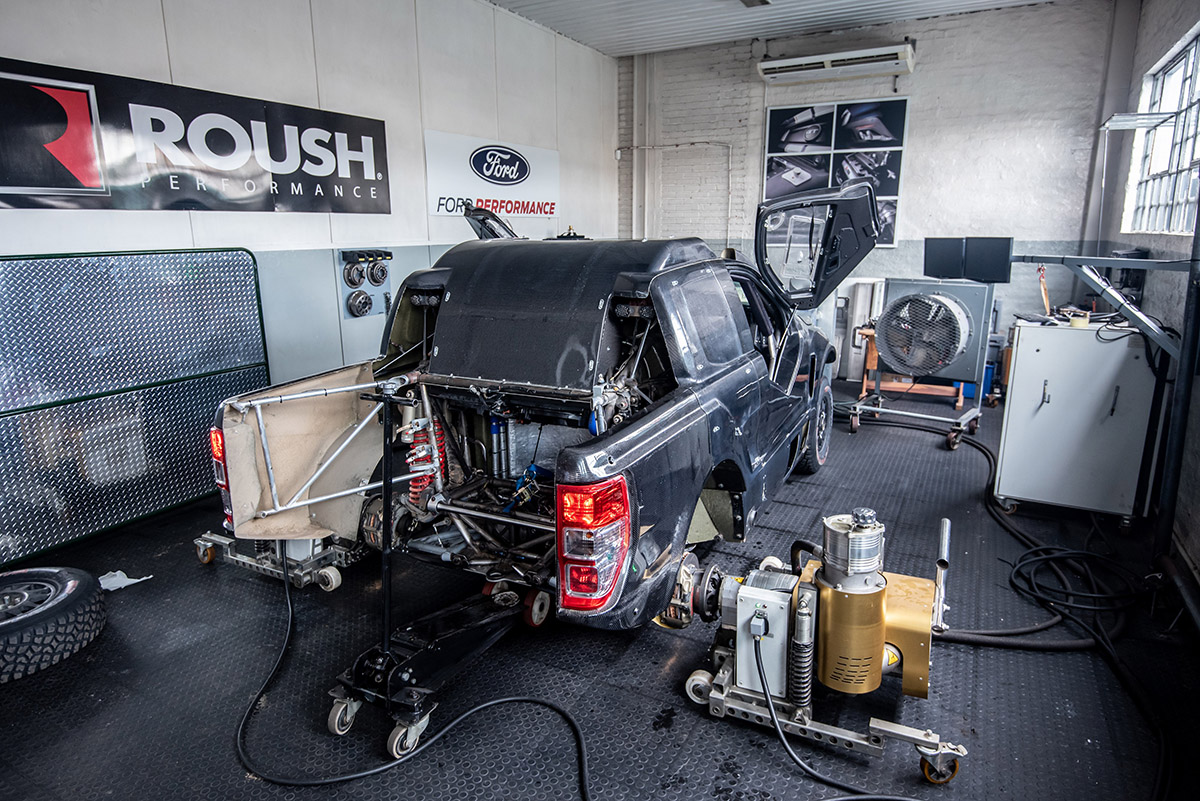 The vehicle was entirely constructed at the NWM workshop in Pietermaritzburg. 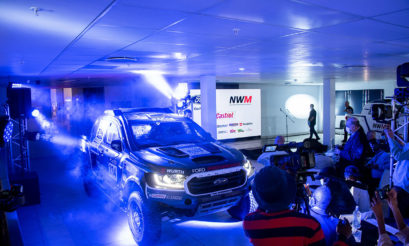 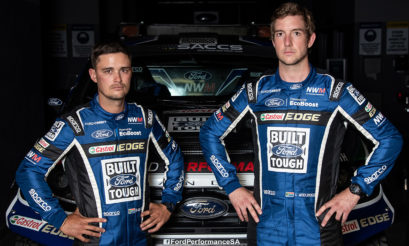 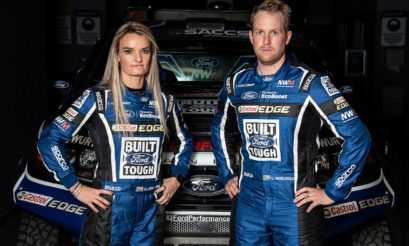 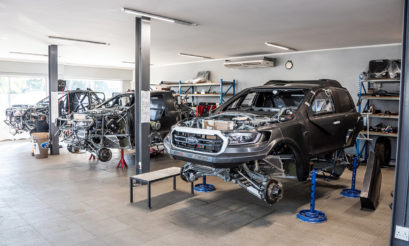 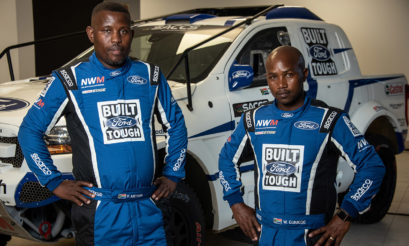 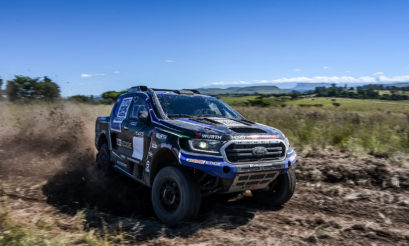 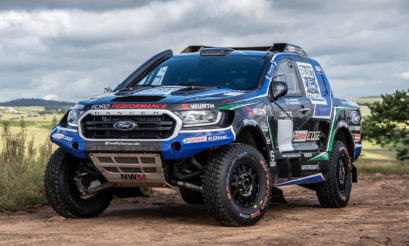 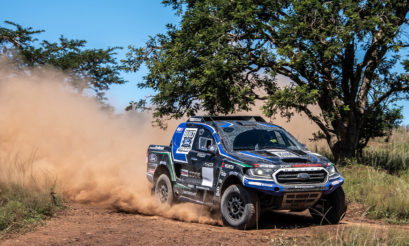 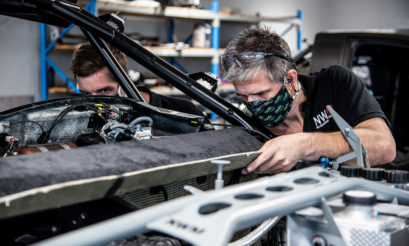 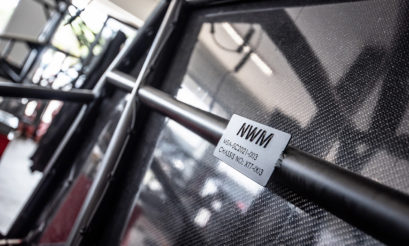 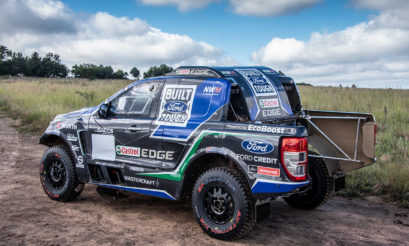 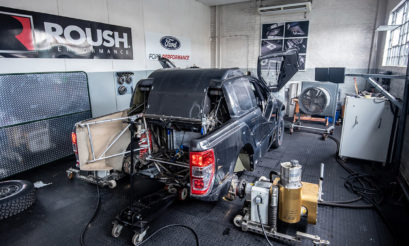 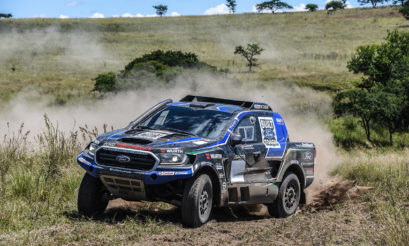 The biggest change that most fans will notice regarding the Ford Castrol Cross Country Team’s new premier-racing class Ford Ranger is that it has a V6 engine, rather than the V8 that powered the Class T Production vehicle that was Ford’s previous top-dog entry.

The man behind the all-new car, Pietermaritzburg’s Neil Woolridge, says that when he asked the Ford Motorsport people in the US how much power could be extracted from this new engine, the reply was: “ As much as you want?”

This 3.5-litre Ecoboost twin-turbo V6 has been used to motivate Ford’s exceptional GT supercar, after all. And when deciding to go the new V6 route, Woolridge admitted that the V6 twin-turbo was a better fit for Ford’s marketing plans for production vehicles.

What is certain, having witnessed the new car drive into the launch venue a week ago, which was at Ford’s new Service and Technical Training Centre, located just across the road from the main Ford plant in Silverton, is that it sounds extremely crisp, with a six-cylinder shriek as opposed to the traditional V8 rumbling thunder.

The reality of the FIA regulations for SA Cross Country Championship racing sees the power of the new V6 restricted to 300 kW, which means the engine should be extremely under-stressed. But there is a significant torque curve improvement compared to the naturally-aspirated V8 used in the Class T Ranger pick-up, and this should make the new vehicle all-the-easier to drive.

Another significant drivability factor on the all-new FIA-spec car is that the engine is located much further back on the chassis, as per the FIA regulations, and this offers a big advantage in the way the pick-up can be made to fly through the air over high-speed jumps. The further back the engine, the less tendency for the truck to nose-dive on landing, so big jumps can be tackled flat-out with much more confidence. The Class T Production regulations stipulate that the engine has to be located in the original place on the production chassis, although those regulations have evolved to the point where there is not all that much “production-spec” on a class T chassis either.

The FIA chassis is now a pucker chrome moly tubular space frame device designed from a clean sheet, which again means an optimisation of all the components in the car. And the body is all carbon fibre, which not only means that weight has been saved in crucial areas, but that the center of gravity of the FIA-spec vehicle is now much lower, which again improves handling. Racing brakes are also permitted, as opposed to production-based braking systems on the T Production vehicles.

A big boost to handling, as per the FIA regulations, is that purpose-built independent suspension can be used front and rear. The class T racer has to retain the original solid rear axle layout. The suspension used in the FIA truck features dual BOS dampers, made in France, on all four corners, the NWM Ranger being the first racer in the world to use this latest version of the BOS suspension.

The FIA rules also allow for a much wider wheel track, which, again, aids stability to a vehicle that still looks, at a quick glance, like a production pick-up, or pretty close to it! The FIA and Class T production pick-ups may look similar to the uninitiated, but the Class T bakkie is built to keep costs down to enable privateers to race them, whereas the FIA is more like a super-trained athlete beneath that carbon-fibre cladding.

Woolridge, who oversees a 16-man team of technicians at his Pietermaritzburg race shop, grew up with petrol in his veins. His father, Peter Woolridge was an extremely successful sports car racing driver in the 1960s, and Neil still owns the famous Dart sports racer that his dad drove to many victories, including success in the famous Kyalami 9 Hour. Neil, now 61, started off racing motorcycles in enduros and won many championships before switching to four-wheels about a quarter of a century ago.

Now he builds racing off-road pick-ups that have won championships in many parts of the world, including Spain and Brazil. NWM or Neil Woolridge Motorsport, has to date built 25 Class T-spec racing pick-ups for off-road championships. In 2018 and 2019 the NWM Ford Ranger scored back-to-back Class T victories in our South African Cross Country Championship, and now, both Ford and the ‘Maritzburg specialists believe it is time to tackle the top FIA-specification class.

“This new vehicle has been designed from the ground up by our team, and built in our workshops. We have entered two of them, and they were actually due to make their debut last season, but Covid-19 pulled the handbrake on that,“ says Woolridge.

An eye-catching item on the new Ranger is the fitment of gullwing doors which flip up to provide easy access to driver and co-driver. The new pick-up is also instantly identifiable from its Class T siblings by the exposed carbon fibre panels on the new body.

Other detail changes include an all-new SADEV six-speed sequential gearbox that is some 10 kg lighter than the gearbox previously used with the V8 racer. The entire drive train has been redesigned to fit the new (further back in the chassis) location of the engine, and each drive shaft is symmetrical on both axles, enabling quick replacement if necessary and necessitating less spares to be carried over a race weekend. BOS hydraulic jacks are also integrated into the pick-up, enabling the raising and lowering of the vehicle at the push of a button. All these items can be vital time-savers in mid-race, when a wheel or a drive shaft has to be replaced.

The pilots of these beautifully-built racers both come from the Woolridge establishment. Lance Woolridge (29) is the lead driver, with his brother Gareth (26) occupying the primary berth in the second FIA-spec car. Lance is the 2018 and 2019 Class T champion and Gareth has already been a well-established front-runner in Class T. When asked which is the quickest, Neil considers the question seriously and answers that both his youngsters are probably equally quick on their day, both highly competitive. Back at the factory in Pietermaritzburg, Gareth’s talents lie more in the technical areas, whereas Lance is keener on the administrative and marketing side of the business.

Lance’s co-driver is the well-known Elvene Vonk, who won many national rally championships as Leeroy Poulter’s navigator, while 27-year-old Boyd Dreyer is in the hot seat alongside Gareth. Elvene says she much prefers Cross Country racing to rallying, because the navigator plays a much bigger part, with no pace notes. “There is also so much more seat time in a Cross Country race, so I think it’s wonderful,” she smiles.

In addition to the new FIA cars, NWM will also field one of last year’s Class T pick-ups for a new Motorsport Development team, comprising Wiseman Gumede (driver) and Fanifani Meyiwa in the navigator’s berth. In addition, NWM will supply no less than five privateers with V8-powered Class T Production vehicles this season, and also offers these teams plenty of logistical and spare part support. Ford South Africa is partnering NWM in running the new Development team.

Woolridge reflects that with the Covid-19 pandemic, the team in Maritzburg was compelled to do a lot of the development work themselves, especially regarding the BOS suspension. He cautions that it is not going to be easy taking on championship-winning and Dakar-experienced Toyota in the top FIA class for the first time. The season gets underway on March 26-27 at Dullstroom for the first round of the seven-round 2021 South African Cross Country race series.

At present fans are not officially allowed at the events, due to pandemic rules, but they can follow the series using the RallySafe App, which can be downloaded free of charge for iOS and Android phones.