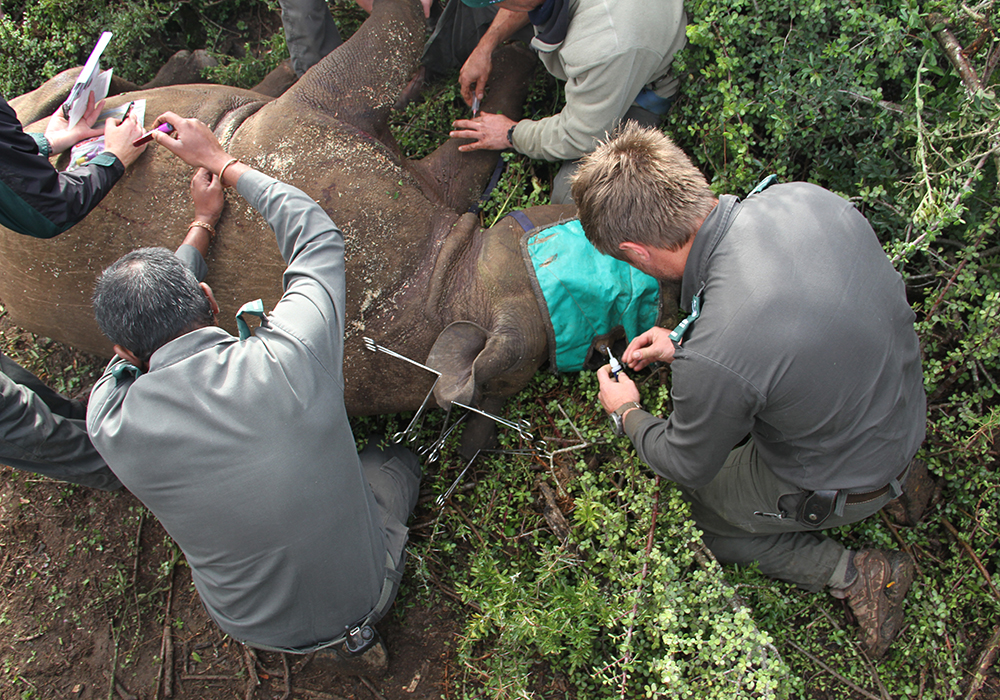 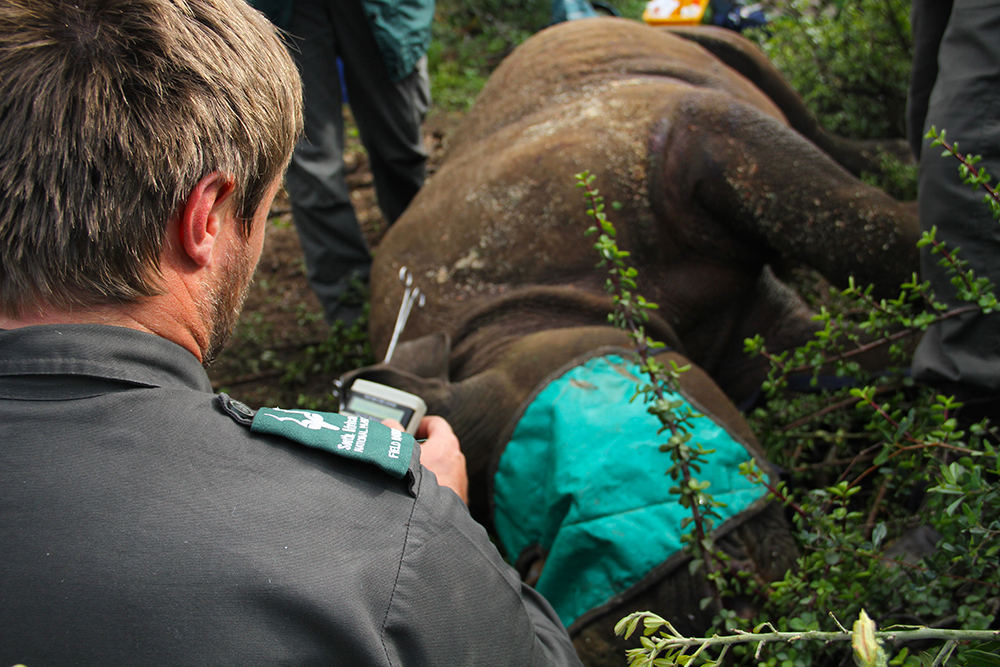 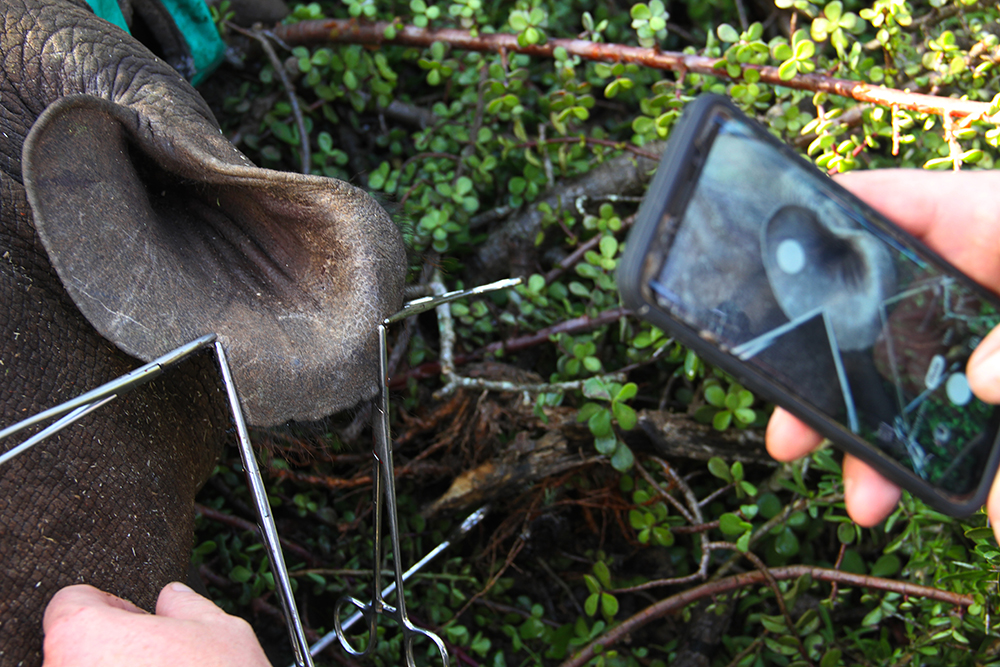 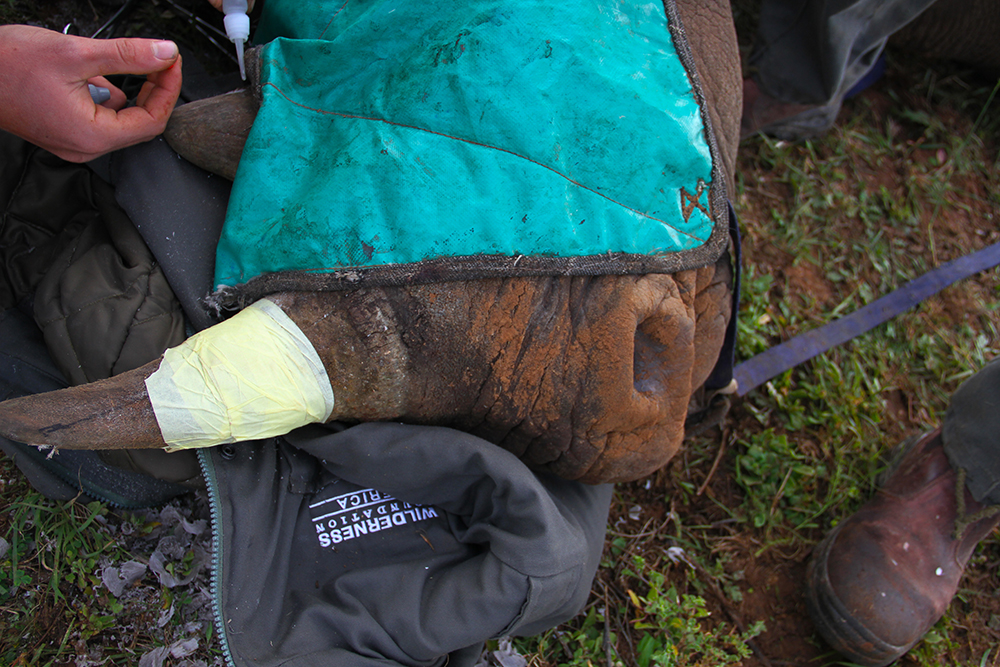 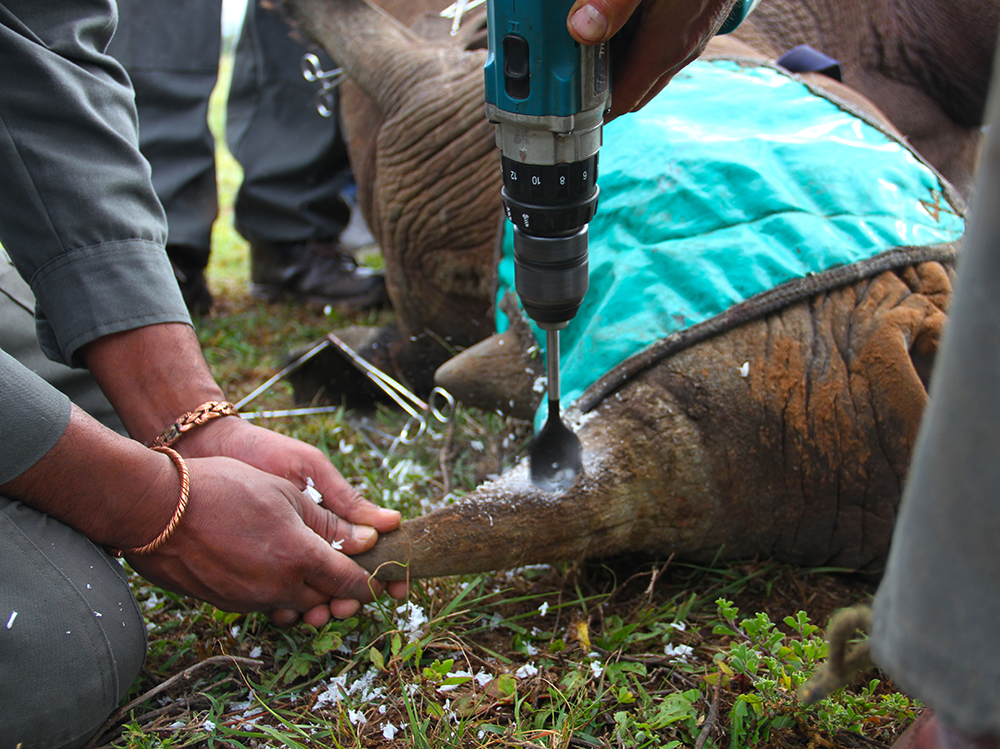 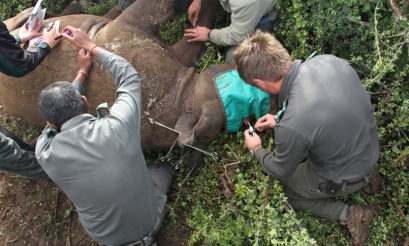 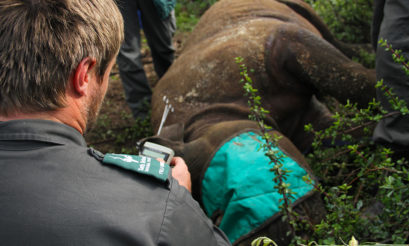 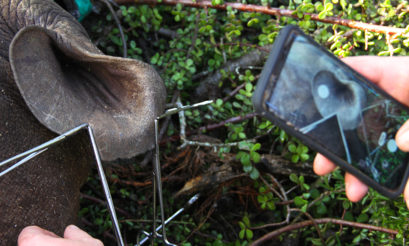 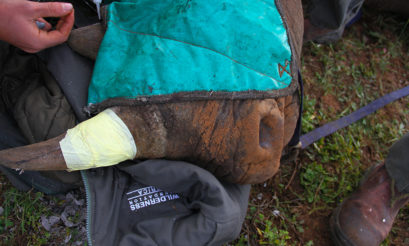 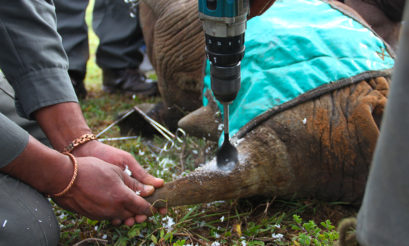 There is a new war. It is the war against poaching. The war to protect Africa’s greatest asset, our animals and it requires tactics and equipment never needed before.

We are at an undisclosed location, getting ready to witness the darting, data collection and microchipping of a couple of rhinos.

A convoy of bakkies are ready to go and a Bell Jetranger hovers overhead. The call comes over the radio that a rhino has been spotted and the helicopter leads the way. The rhino is darted from the air and followed until it comes to rest.

I thought that looking for a rhino in thick bush would be a time-consuming exercise but clearly if you know where to look they are not that difficult to find from the air.

As the ground team nears the site where the helicopter has we quickly realise that the rhino has come to a standstill in an area covered by very thick shrubbery. So we leg it on foot for a few hundred metres until we catch up to the little guy.

The rhino has put his head in the nearest bush and that needs to be quickly cleared via chainsaw so that he can lie down comfortably. It is organised chaos and everyone knows what they need to do. The rhino that has been sedated is a 15-month-old calf, which is around the minimum age from when they can be sedated safely.

The rangers and veterinary staff work frantically, they can’t keep this little one sedated for too long and there are a couple of things that need to be done. The dart is removed and the wound treated with antibiotics, bloods are taken to do a health check and also to aid in the building of a rhino DNA database. A microchip is placed under the skin, much the same as what is used in domestic animals. Next up, a small tracker is placed on the animal so that he can be found by the friendlies more easily and checked up on every so often. Lastly the ears are notched according to a numbering system that allows the staff in this reserve to keep tabs on the animals.

The notches are visible from quite a distance and rangers keep a record of which rhino were spotted when, to ensure that all rhino are seen every couple of days.

Imagine being chased by a helicopter, sedated and then waking up with a couple of notches in your ear. Hangover Africa style. But this is what needs to be done to keep these animals safe. Lastly a quick physical examination is done, including measurements of the horn that will now go on his record, which is linked to the microchip.

It is time for the little guy to wake up and we scatter, a disorientated rhino is a dangerous one. The helicopter checks that he is on his feet and gets out of earshot as soon as possible to avoid traumatising the animal further. The helicopter is on contract and needs to be used as efficiently as possible so the team is immediately on the look out for the next rhino.

The rangers in this park have a rough idea where these animals hide and it is not long before another is found and darted. This time she comes to rest in a flat grassy area making access easier.

The process is repeated but this rhino is quite a few years older and the horn more developed. Fortunately it is a cold, rainy day so there is little chance of the animal overheating today, something that often happens in these high stress situations.

A few seconds of drama unfolds, as the electrical drill is not playing along.

Using a large drill bit, veterinarians insert a tracker in the horn and secure it with dental epoxy, the same stuff that is used to make artificial teeth when you go to the dentist. This allows the animal to be tracked more effectively but the process takes longer.

Again the task of treating the wound, microchipping the animal and notching the ears according to a predetermined system is repeated before a full physical examination is done. We retreat to the safety of the Amarok before the animal is brought back to consciousness via an antidote. A bewildered 800kg animal heads for the hills to try figure out what just happened.

These extreme measures seem to be having a positive effect. The rhino population has stabilised but the on-going fight against poachers is intense and requires a lot of resources. For example, that helicopter is R17000 an hour and in our convoy are four double cabs of experts.

Witnessing first hand the incredible precautions that are being taken to protect these precious animals is life changing. Seeing an 800kg animal lie sedated and vulnerable at the hands of humans, who are their only real threat, is a bittersweet moment. Fortunately these are friendly humans, but every day can easily turn out to be a very bad day for a rhino.

Many feel that dehorning rhino will be an effective way of deterring poachers but this is not the case. The rangers in this area have seen that even dehorned rhino are not safe at the hands of poachers. Often poachers will go to a lot of effort and risk to track animals, so when they do find a rhino and its horn has been removed they will kill it anyway. Thus eliminating the chance that they will accidentally track this same animal, which is worthless to them, again in future.

The Forever Wild Rhino initiative provides logistical and operational support for conservation and law enforcement agencies responsible for rhino management and security. It is involved in raising public awareness of the rhino poaching crisis in South Africa, managing a rhino anti-poaching tip off hotline as well as managing a rhino horn demand reduction campaign in Vietnam.

90 percent of all the horn that is poached makes its way to Vietnam so in a quest to stifle the demand the foundation is working on educating the people of that country on where these horns actually come from and the effect that this demand is having on these beautiful animals.

Reducing the demand for rhino horn in user countries remains a major focus for Wilderness Foundation Africa and the rhino demand reduction campaign has brought 11 Vietnamese youth to South Africa to take part in a wilderness trail and wildlife crime information workshop. During these camps they get to really experience nature and rhinos in the wild. Upon returning home these ambassadors have been spreading the message to their peers and family to stop using rhino horn and drive home the message that a rhino is better alive and with its horns intact.

The programme also works with approximately 5000 veterinary students in Vietnam, educating these animals on the plight of this African mammal.

Darting, data collection and monitoring rhino is but one aspect of ensuring the population remains sustainable. The management of rhino is a very important part of their sustainability. Their territory has to be monitored as factors like too many elephant in the area can have a negative effect on their frequency of breeding, another reason why it is very important to accurately keep track of the population numbers. When the rhino population is managed properly it could grow by as much as 8 percent per year and this needs to be done as effectively as possible in order to try limit the effect that large scale poaching has on the species.

The rhino is the focus of a lot of energy and resources and consequently this was has had an adverse effect on many other species of fauna and flora. Rangers have become soldiers that need to protect animals and hunt poachers meaning that very often they can no longer focus on the other species and do the traditional ranger work that is needed.

In the last eight years, Volkswagen Commercial vehicles has supported the initiative through the sponsorship of Amarok bakkies. The Amaroks have operated in South Africa’s rhino population hot spots around the country.

Forever Wild Rhino representatives are very grateful for these vehicles and feel that the Amaroks perfectly fit this role, as they are extremely comfortable vehicles over the long distances that are often travelled between the poaching hotspots. Once on location they morph into serious off-road vehicles at the push of a button.

The South African government only provides so much resources and the successfully fighting back against poaching in in certain areas has only been possible due to organisations like Wilderness Foundation SA, who rely solely on private funding.

The Amarok is a tool in the arsenal of the modern day protectors of these animals. Alongside high-powered rifles, night vision goggles and helicopters they are vital in this war.

How can I get involved?

For more information and to pledge your support visit www.wildernessfoundation.co.za 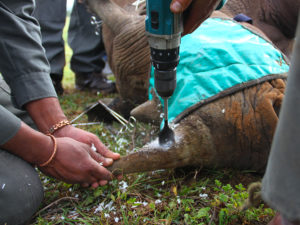 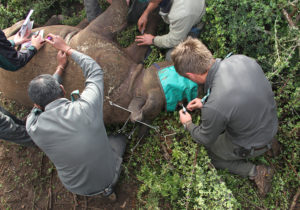 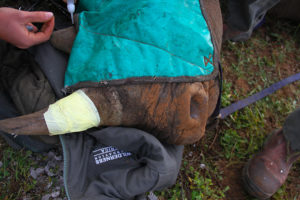 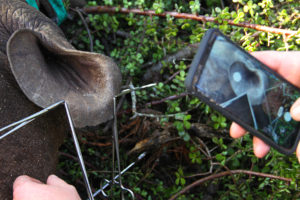 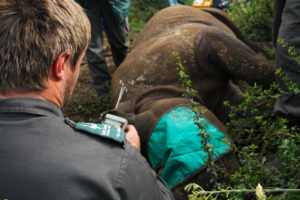