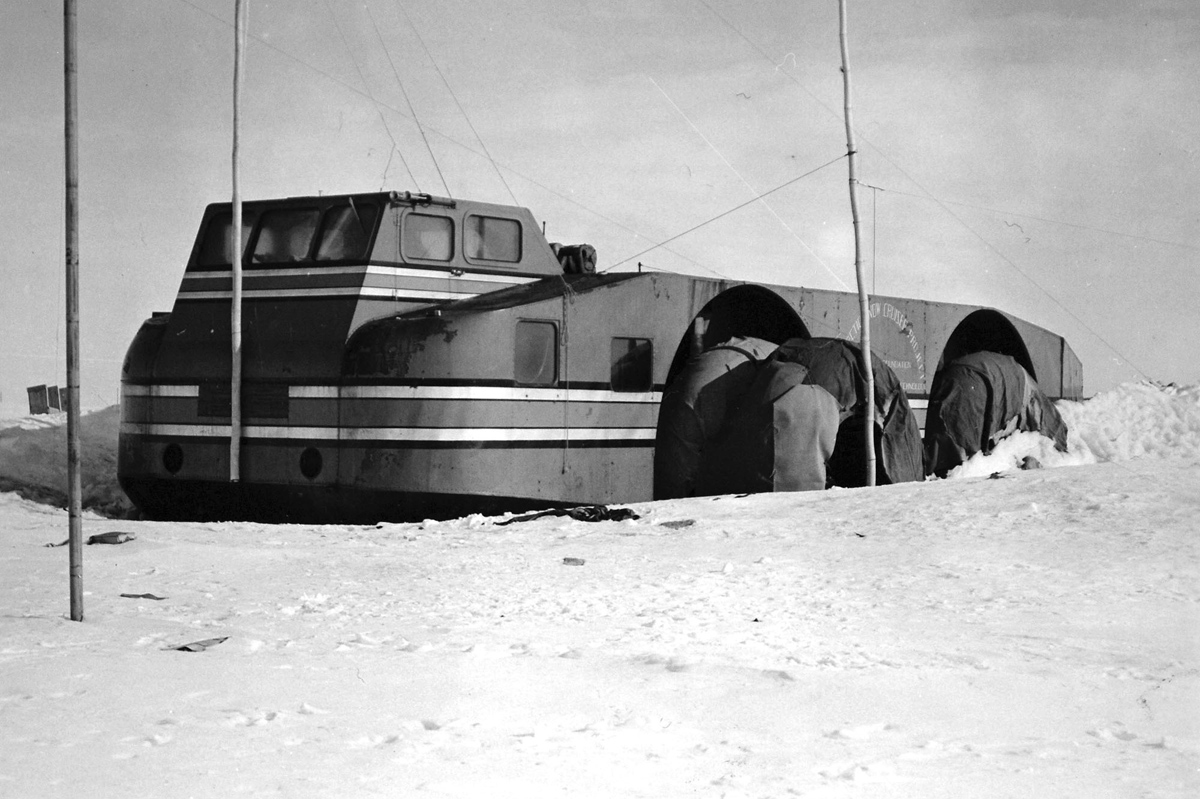 Ever since Karl Benz invented the car, humans have been pushing the boundaries of what we can do in them. This is the story of one madcap attempt at pushing the limits of what could be done with an internal combustion engine and some wheels.

There’s a brilliant documentary by Werner Herzog called Encounters at the End of the World. This beautifully filmed expedition essentially explores not only Antarctica but also the people who live and work there. They’re a fascinating bunch of personalities, as you can imagine.
Herzog illustrates this perfectly within five minutes by interviewing the driver of the only bus on Antarctica. This bus transports new arrivals from the airport (an icy runway) to the research station. The bus resembles a bus as we know it but rides on a series of large, floaty tyres. The kind of tyres required to traverse this harsh landscape.

The man behind the wheel is more interesting, however. He left an impressive high-ranking job in New York to drive a bus in Antarctica. When asked why, he replied that he just grew tired of the city and wanted to do something else. What better way to get away from everything than going to the most sparsely populated place on the planet?

He’s not the first to do so. The very first attempts at motorised arctic exploration took place in 1907. The first car to have a go at it was really nothing more than a chassis and an engine but the expedition had to be cancelled as the car – rather ironically – kept overheating.
For years, the idea of exploring Antarctica was abandoned until the world was once again at war with itself in the ’40s.

There was a big question mark over this huge chunk of land, with multiple countries competing for ownership. For the record, Antarctica ended up under the management of the Antarctic Treaty. It is currently signed by 38 countries who have the right to explore and research there. Mining, disposing of waste and all nuclear activities are strictly prohibited.

But back when Antarctica was still up for grabs, the Americans decided to build the Snow Cruiser, which would help them dominate the landscape. It was completed in 1939 and it was a technological marvel.

The cigar shape was a tad boring but the bits underneath were astonishing. It was 16 metres long, six metres wide and weighed over 37 tons.
It had a claimed range of 12 800km from the two diesel engines and could sustain its crew for more than a year as they slowly explored the Antarctic at 80km/h.

The big secret to the Snow Cruiser’s off-road ability, in theory, was the individually operated wheels. These could be lifted and retracted individually. The tyres would also be heated while they were retracted into the body, which seemed like a good idea.

On the inside, it had a lab and sleeping space for four people. On top, it had a docking bay for a plane, which would be sent out to find the easiest route ahead.

All of this effort and millions of dollars were poured into this vehicle and it ended up travelling zero miles.

Why? Well, the tyres weren’t advanced as the rest of the Snow Cruiser. The team behind the tyres tested them in boggy, muddy conditions, thinking that snow would be more or less the same thing. The tyre they came up with was completely devoid of any tread and it was made from a hard compound. The heating system didn’t help, because heat melts ice, which only results in a vehicle sinking further.

You can probably guess what happened next. Yup, the Snow Cruiser stood stationary, as its wheels spun pointlessly. Nothing could be done, so it was parked next to Base 3, which was eventually abandoned because of the ongoing war.

At least the crew stuck a pole on the top, making it easy for a team of explorers to find it again in 1946 and 1959. Both times, the Snow Cruiser was said to be in good condition, apart from flat tyres.

What happened to it after that? The answer is almost as amazing as this whole story.

In 1963, a Navy Cruiser spotted some black streaks in an iceberg in the Ross Sea. Upon closer investigation, the crew realised that it was the remnants of Base 3…

The Snow Cruiser wasn’t seen, but it’s easy to guess what happened. As the iceberg floated away from Antarctica, it started melting and at some point the Snow Cruiser swapped its icy tomb for a watery grave.

And all of this happened because there was no tread on the tyres.