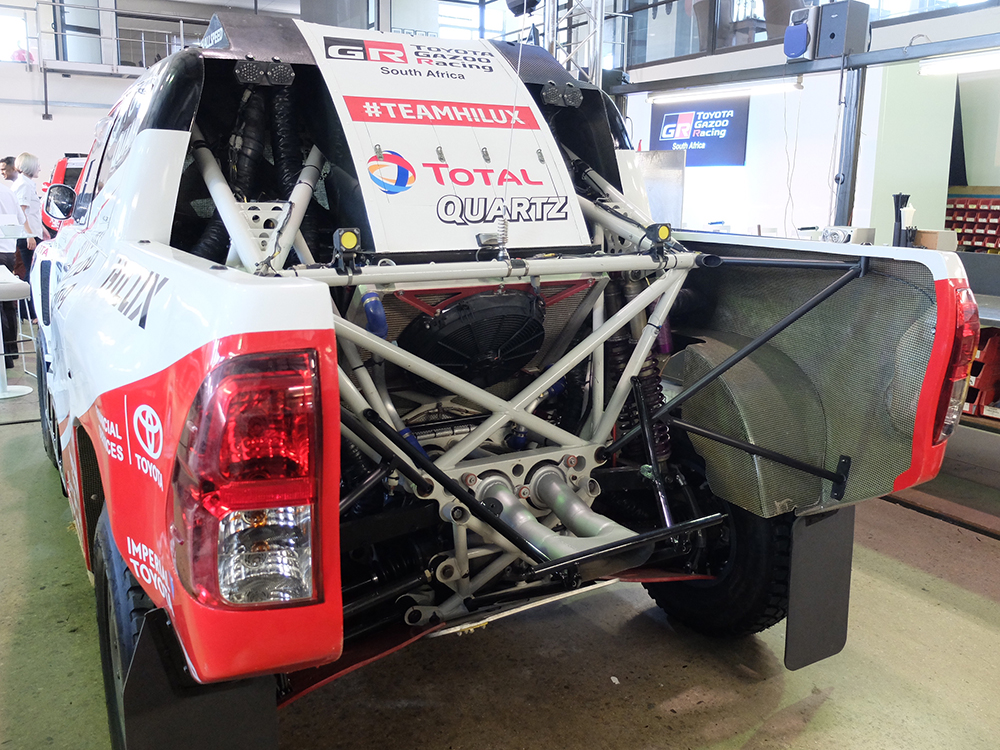 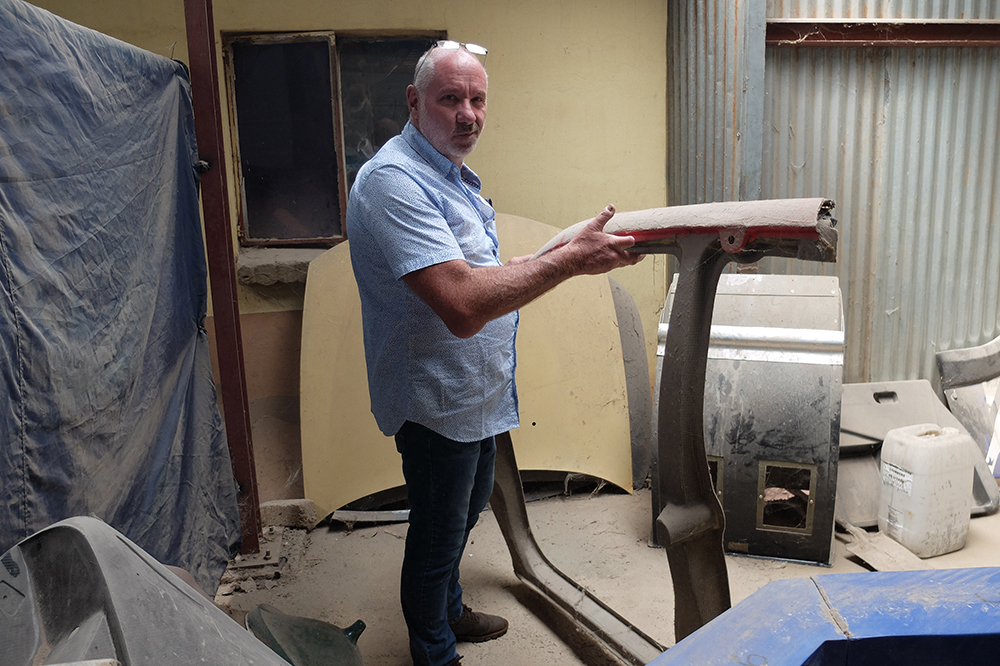 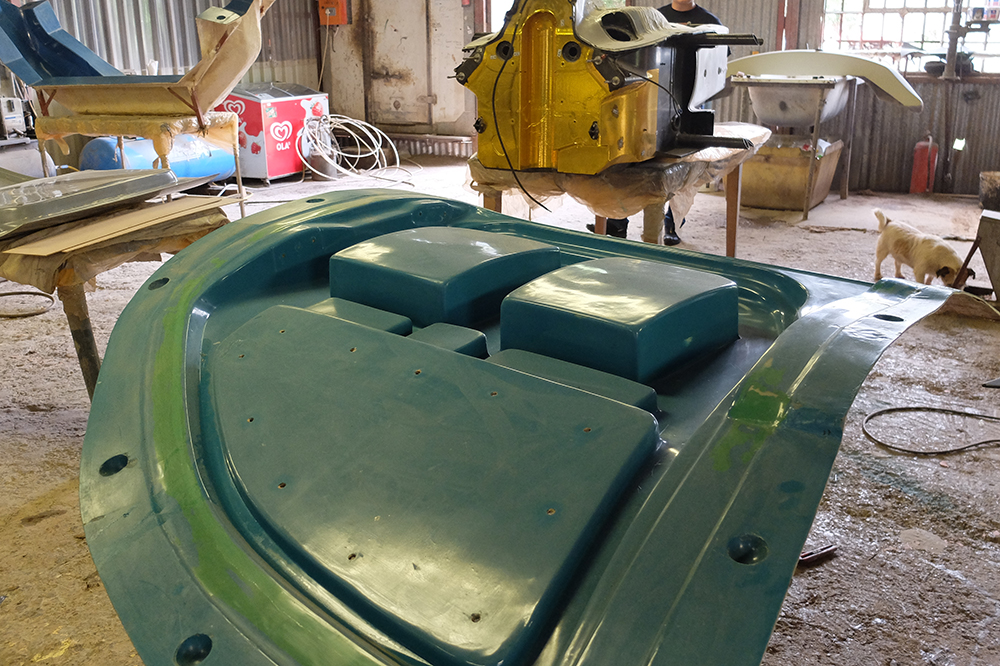 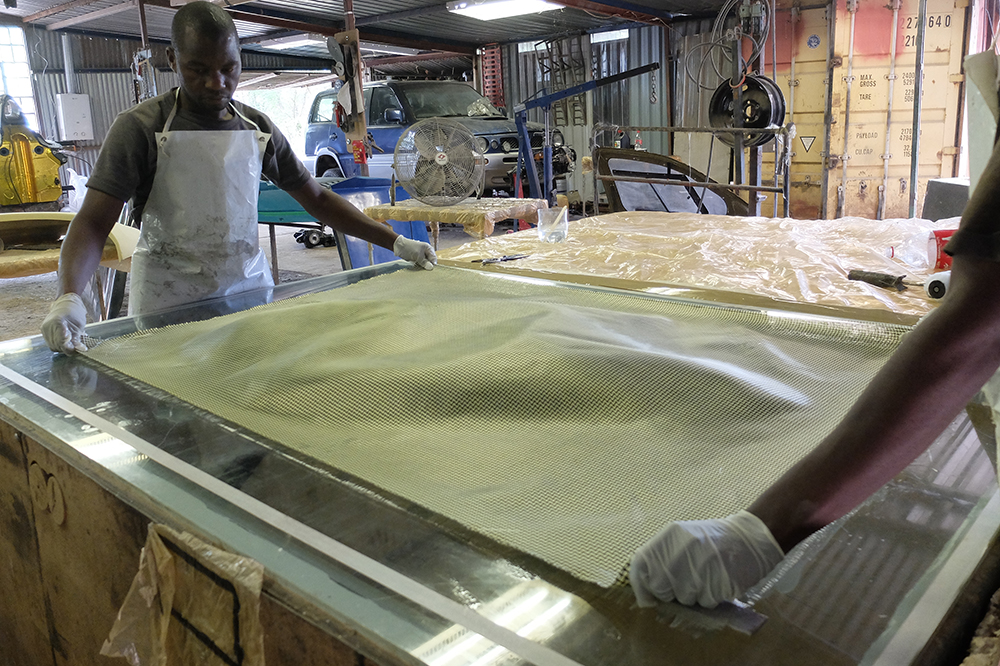 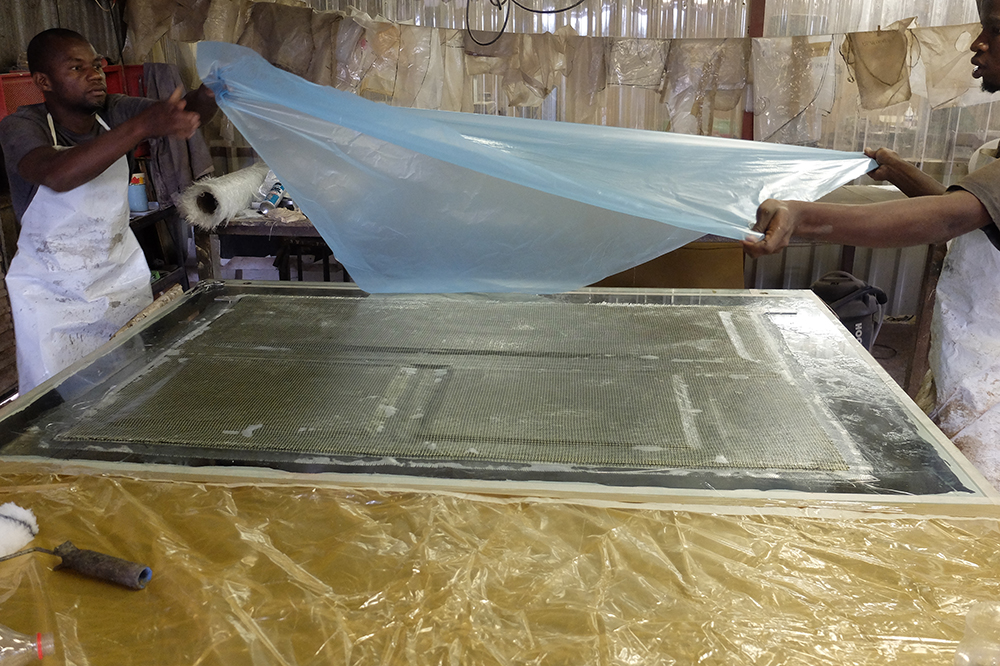 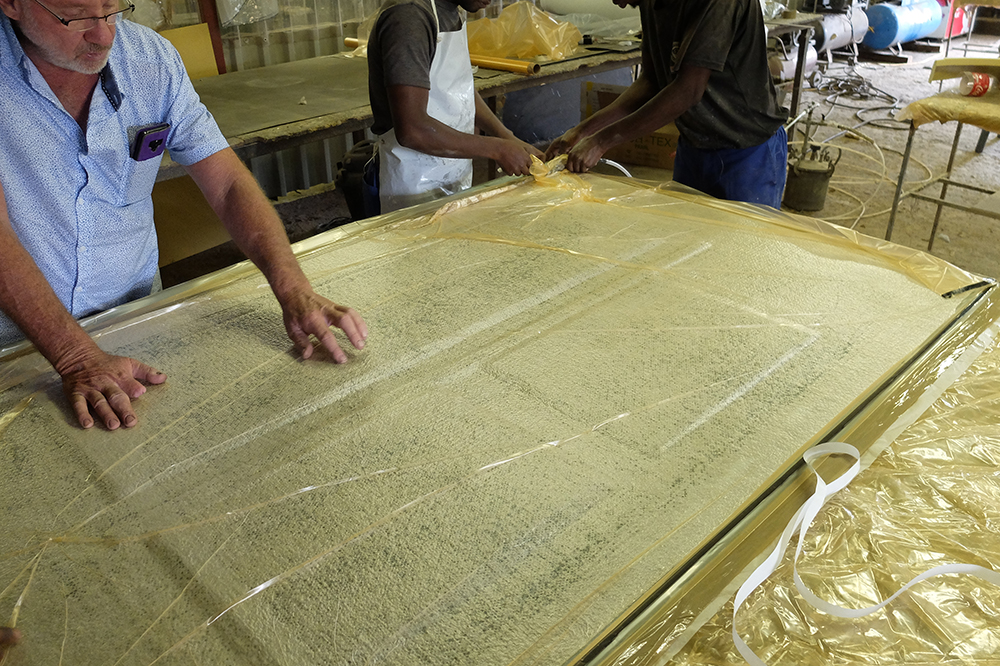 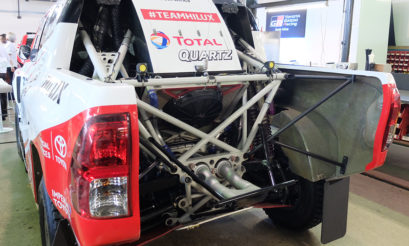 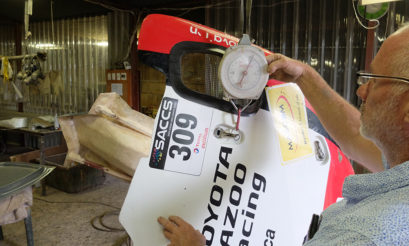 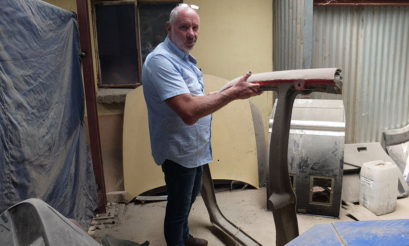 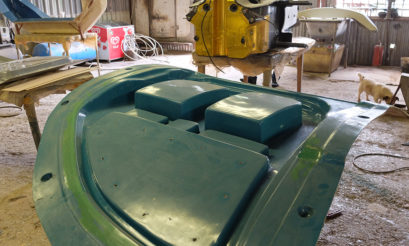 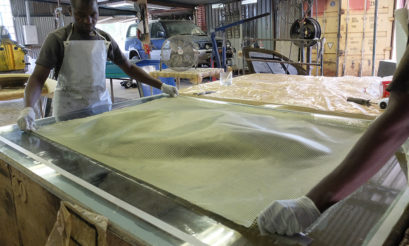 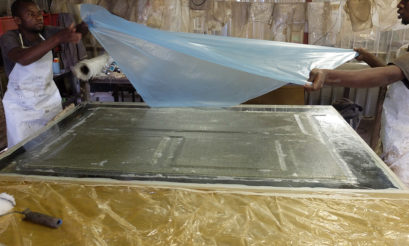 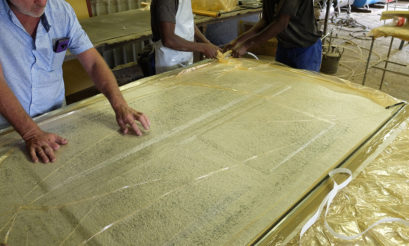 Although now widely used carbon fibre retains a mythical reputation. Its role in the world of motorsport is vital and we have some pioneers in this field right here in South Africa.

In 1879 Thomas Edison, experimenting with alternative materials for light bulb filaments inadvertently developed carbon fibre when he burnt cotton and bamboo, carbonising them into carbon-fibre.

However, the high potential strength of this material was only realised in 1963 at the Royal Aircraft Establishment at Farnborough. The process was then patented by the UK Ministry of Defence and then licenced to three companies including Rolls Royce who were already making carbon fibre. After successful use in 1968 of a Hyfil assembly in the Rolls Royce Conway Jet engines of the Vickers VC10, Rolls Royce took advantage of the new materials properties to break into the American market with its RB211 aero-engine that featured carbon fibre compressor blades. Unfortunately, the blades proved vulnerable to damage from bird strikes causing the company a number of setbacks that saw it being nationalised in 1971.

The Toyota Hilux that stormed to victory in the 2019 Dakar Rally is an engineering masterpiece. Hallspeed who manufacture the FIA specification racing bakkies on behalf of Toyota have always developed their bakkies according to the mantra of local is lekker, sourcing everything they need here in South Africa and very often these components exceed the standards of the traditional European parts suppliers.

One of those aspects is all the carbon fibre and composite pieces that make up the shell of the racing Hilux as well as a large number of other pieces. Basically everything that is plastic or steel or aluminium on a normal Hilux is made stronger and lighter with composite materials. A dedicated team in the most unlikely of locations, a smallholding in the South of Johannesburg, skilfully craft these parts

Stan Wallace and the team at Wallace Race composites are no strangers to these incredible materials. In the 1970s while still in school, Wallace started playing around with composites for canoes and paddles. This led to a bursary to go and study composite engineering, but this was unfortunately side-tracked when a two year compulsory tenure in the Police service lead to ten years spent serving South Africa.

Fortunately, Wallace continued to develop his craft after hours while looking for the competitive advantage for him and his wife, both competitive paddlers, on the water.

Through a contact in the canoeing world he was contacted by Glyn Hall in 2014 to build a lighter rear spoiler for the Toyota Yaris rally car. Wallace was able to build the part 130grams lighter than the imported European part. This lead to Wallace being commissioned to build more and more parts for Hallspeed.

When the Toyota Gazoo Racing Hilux was being completely remodelled Wallace spent some time in the Hallspeed workshop but Hall soon realised that the clinical environment was not conducive to how Wallace operated and had the entire chassis transported to the Wallace Race Composites workshop in Henley on Klip, where Wallace and his small team worked long hours to get the car done.

The accuracy of the team is phenomenal, with a lot of the sculpting done freehand, once completed the car was scanned and was within 3mm of the team’s computer renderings

Wallace has had a close relationship with composites supplier Advanced Material Technologies for many years. They have aided him in pushing the boundaries as to what can be done with composites and have ensured that he is up to date and always trying new methods.

Depending on the application of the part, the team will follow one of two processes. The various layers of woven material will either be infused with resin if a good finish is important, alternatively in areas that require high strength they will make use of a dry layup.

What this small team is doing on a plot in Henley on Klip is incredible, with a team no bigger than six members, they are producing world-class composites on the same level as teams like Peugeot or Mini who have 40-60 staff members.

“We now build 106 different parts for the Toyota Gazoo Racing Hilux, this includes everything from the obvious parts like the bonnet, doors and fenders to things like the fuel tank, undertray and dashboard.” said Wallace

Interestingly the Hallspeed engineers request different types of parts for different events. “For events like the Dakar we go as light as possible on the cosmetic parts like fenders, on the other hand, an event like the Toyota Desert 1000 requires much stronger front fenders as the African bush and the thorny tracks are merciless on the front end of these cars” said Wallace

Although the regulations mean that the cars have to weigh in at a specific base weight, it is advantageous to make the car as light as possible as engineers then have the option of placing the weight where it is beneficial to the handling of the vehicle, like lower down in the middle of the chassis.

So how much lighter are these carbon fibre parts really? For example, the weight of the door has been reduced from 22 to 4,2kg, while the bonnet is down from 18 to 3,2kg

When I ask Wallace how it felt to see the bakkie that they had a substantial hand in building roll across the podium in the first position, he goes quiet and the tears start flowing. Here is a man that has put his heart and soul into this project.

“For seven months, we worked for 15 hours a day, seven days a week to make every single composite part on the Dakar winning Toyota Hilux. When I asked my daughter what she wanted for her Birthday, all she asked was for me to take a day off and spend it with her, but that was not possible” said Wallace

Wallace recalls a tight deadline for a set of doors in 2017, “The order came in on a Friday and the team needed the doors on a Monday. The doors are fairly complicated parts and we worked non-stop all weekend on Red Bull and Coke. I was so fatigued on Sunday afternoon that I sliced open my finger on the table saw and had to have it amputated under local anaesthetic in order to get back to work so that the parts could ship out on the Monday.” said Wallace.

If ever there was an example of blood, sweat and tears, this is it.

Following this victory at Dakar Wallace Race Composites will be branching out into the automotive aftermarket. They are in the final processes of developing a composite bullbar for one of South Africa’s most popular bakkies. This product is set to be substantially lighter than conventional steel bulbar while being just as strong. And nothing looks better than raw carbon fibre. 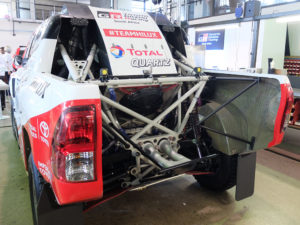 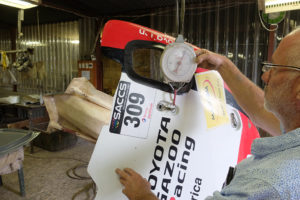 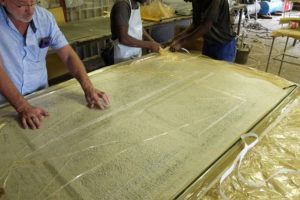 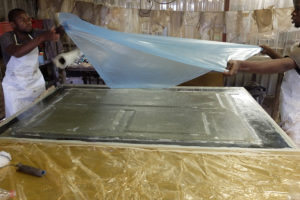 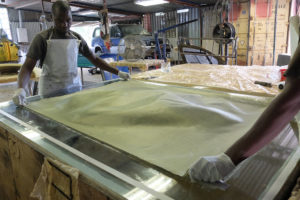 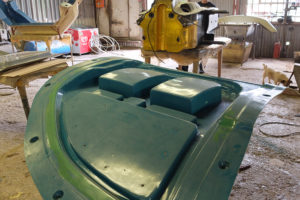 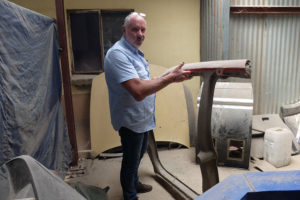