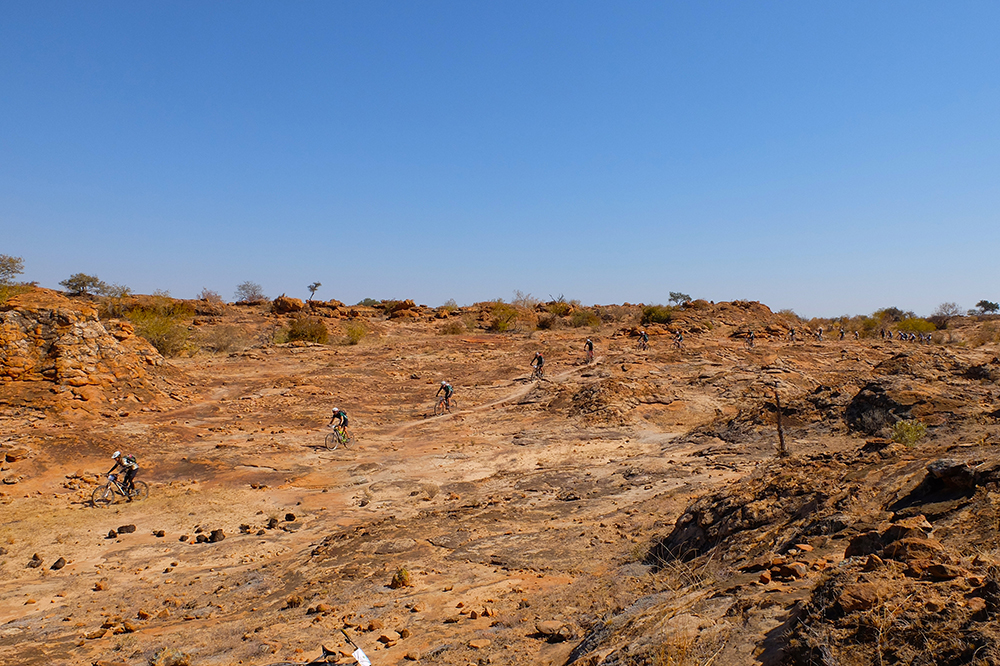 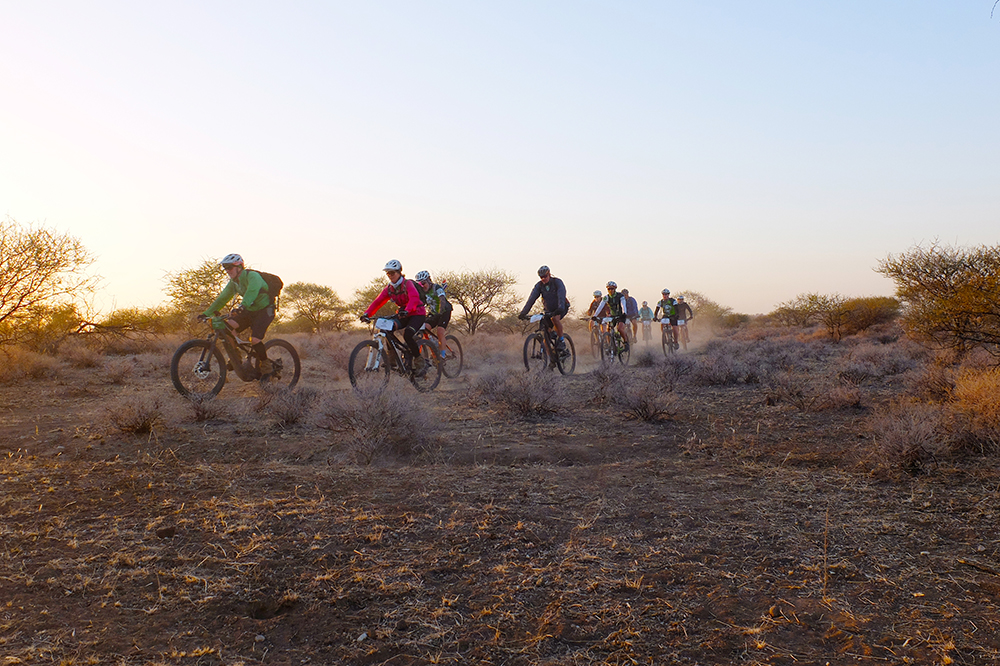 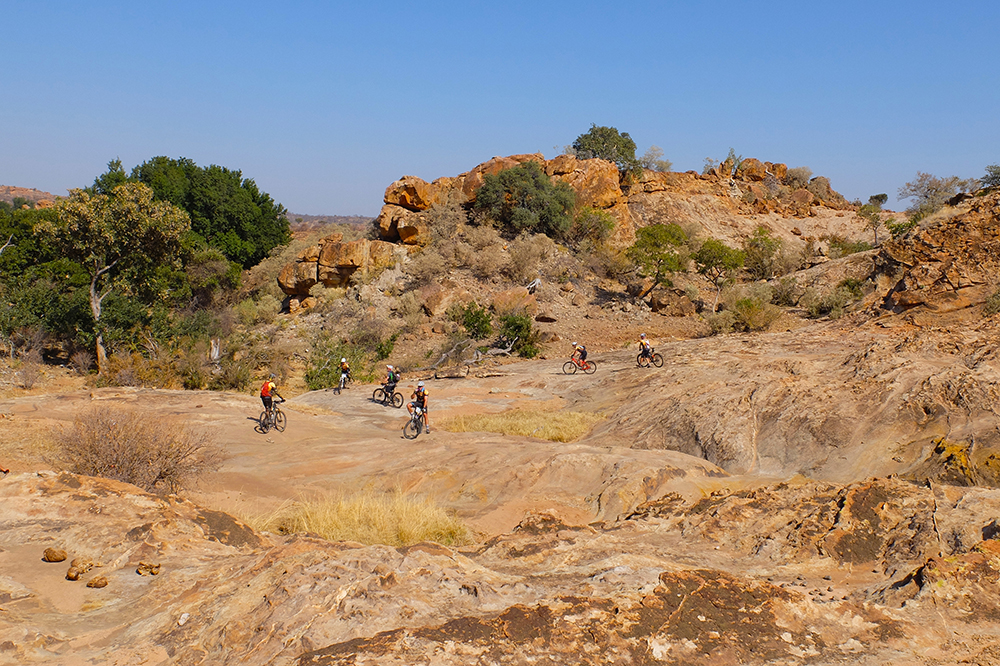 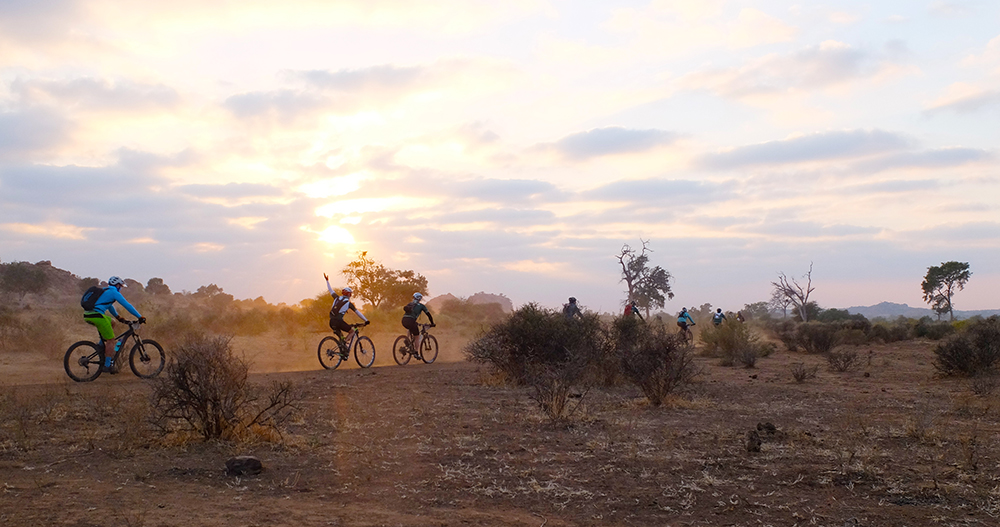 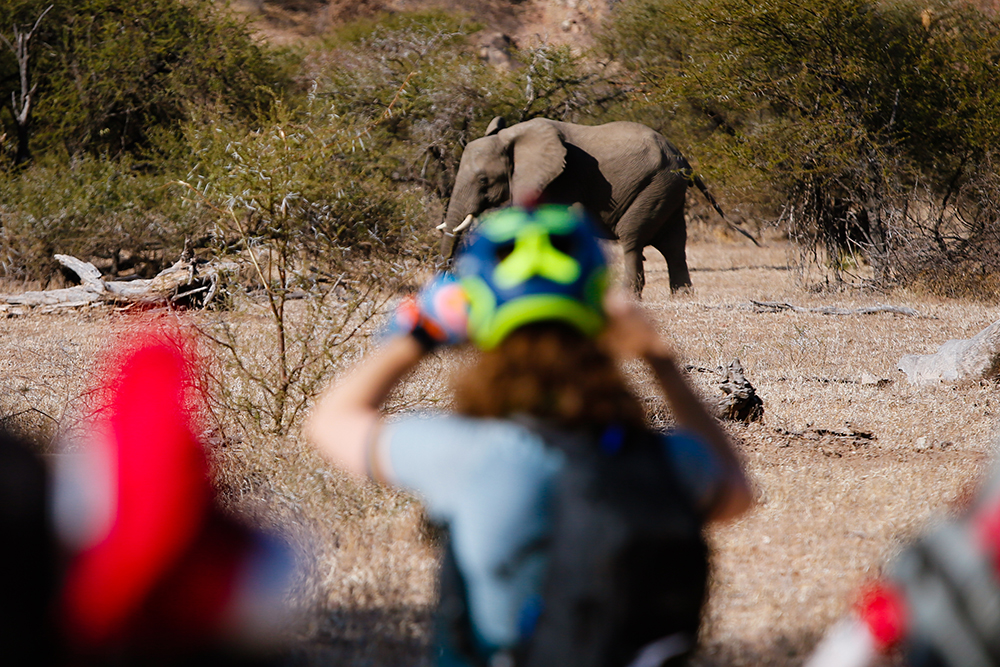 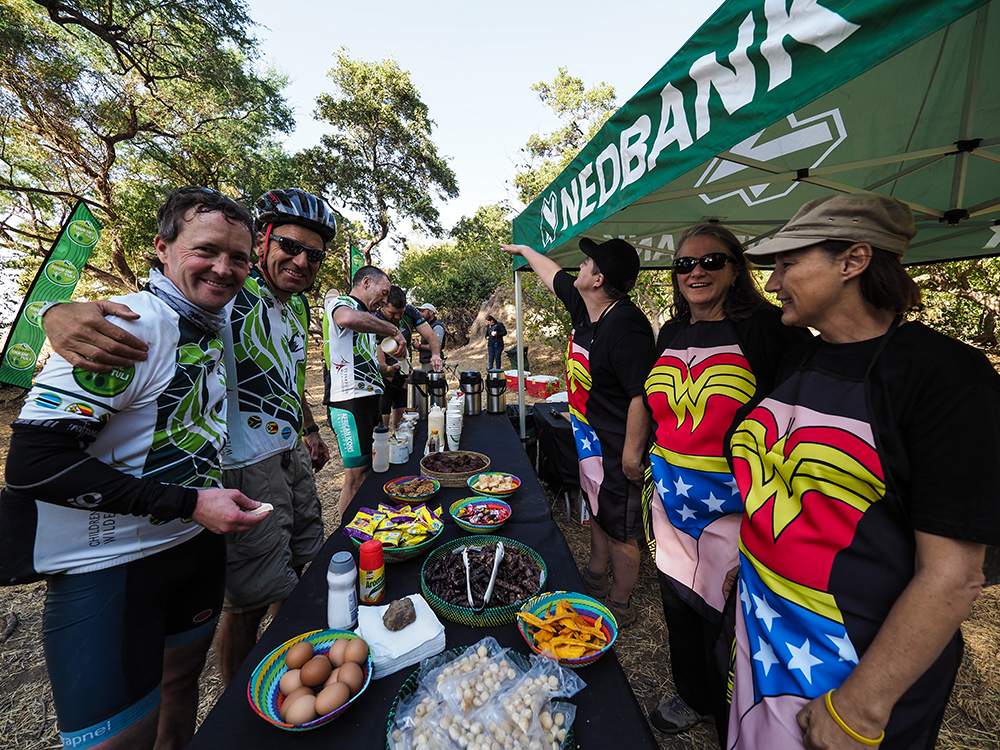 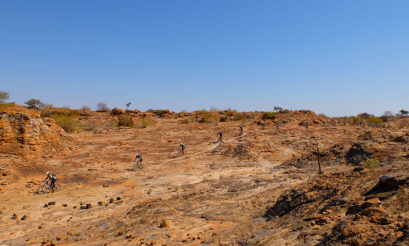 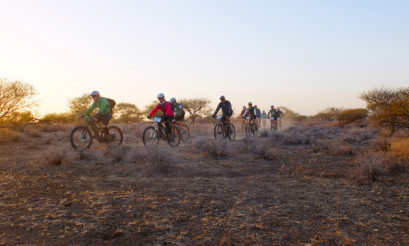 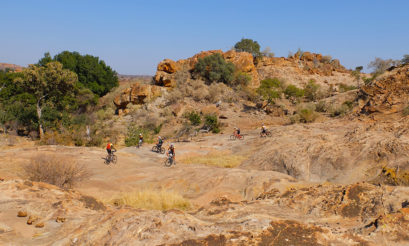 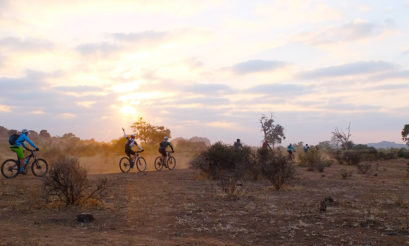 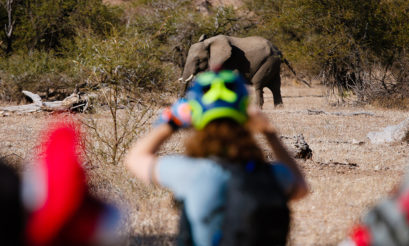 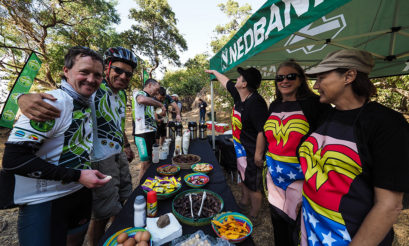 If you prefer to ride your bike to get to incredible places rather than to win races, the Tour de Tuli is the event for you.

Make no mistake, here at Leisure Wheels we are firm believers in the internal combustion engine, but sometimes a vehicle can only get you so far. Then it is time for a different type of transport, something that can take you further, deeper, into the wilderness. This time round that tool proved to be the humble bicycle.

The Tour de Tuli is an unique experience that brings together a host of people who share a love of mountain biking and the outdoors. Rider are privileged to be able to ride in the beautiful wilderness areas of the Greater Mapungubwe Transfrontier Conservation Area which includes areas of South Africa, Zimbabwe and Botswana across four days, and to do so for a good cause, the children of the Children in the Wilderness programme.

Children in the Wilderness is a non-profit organisation that facilitates sustainable conservation through leadership development and education of rural children in Africa. In this way the programme hopes to inspire the children so that they can become the custodians of these areas in the future. Children in the Wilderness started in Botswana in 2001 and has since expanded to Namibia, Malawi, South Africa, Zimbabwe and most recently Rwanda.

The ride started and ended at the Mapunbugwe confluence where the Limpopo and Shashe rivers meet and you literally look out across three countries.

Mapungubwe is an interesting place, this extensive Savannah landscape located right on South Africa’s northern border, where Botswana and Zimbabwe meet is a land of ancient floodplains, sandstone formations, mopane forests and towering baobabs. It is also said to be home to South Africa’s first kingdom, a highly complex society that marked the heart of a pre-Shona kingdom between 1050AD and 1270AD. The Mapungubwe cultural landscape, the virtually untouched remains of palace sites, the settlement area dependant on them and two capital sites remain and were declared UNESCO World Heritage sites in 2003.

At the time some 5 000 people appeared to live around the Mapungubwe Hill where their sacred leader lived in seclusion from his people. After the collapse of the society it was forgotten until the wealth of artefacts were discovered. Despite being discovered in 1932, it was kept largely hidden from the public until recently, rumour has it that it was due to the fact that it was a favourite hunting ground for government ministers under apartheid.

You get border posts and you get Tour de Tuli border posts. Nobody wants to queue at Beit Bridge or Pont Drift mid bicycle ride, fortunately the organisers had this covered. The evening before we started on our ride we had our passports stamped in the dining tent. Along with your Goos and Jelly babies you ride with your passport in a ziploc bag. The following morning Zimbabwean officials were kind enough to set up a gazebo on the other side of the Limpopo. We simply walked across the dry river, had our passports stamped and were on our way. I now have a stamp from Beit Bridge in my passport without me ever being there.

It takes a couple of days to switch from race mode to touring mode. At water points my first instinct is normally to fill bottles and chug down some coke before heading off within seconds. At the Tour de Tuli you take your time, relaxing under huge trees and enjoying proper food, like wraps, burgers and the best fruit cake I have ever tasted in a unique setting. On one of the days we had a crocodile watching us from across the river while we snacked on a chicken and coscous salad.

Due to the fact that you are riding through wildlife areas, riders are allocated into groups of between 10 and 15, that are accompanied by two guides with wildlife experience. This adds another element to the event as you then spend four days riding, eating and camping with a group of people whom you never knew before, but quickly form good friendships with, the well stocked bar certainly helps. This means that even if you are not heading to the event with a group of friends, along with a roomy tent in the race village, everyone is allocated a group of friends.

I am sure many lifelong friendships have started on this tour. Because people are not racing they are so much more relaxed, they have another beer, they socialise, it is great to see how an event like this and bikes can bring people from all walks of life together.

The changing terrain is incredible to witness, even though we were just moving within a relatively small area. On the South African side it was typical bushveld, but once we crossed into Zimbabwe the vegetation changed with plenty Cocos Palms in places and severely overgrazed areas as soon as you head anywhere near civilisation. The fauna here was mostly goat and donkey and this country has unfortunately been stripped bare by both people and animals in a quest to survive.

And then Botswana and the Baobabs. And the elephant, all of the elephant. A couple of times we had to quickly reroute as our guides got a radio call that elephant were in the area or the resident elephant spotter in the group spotted their flapping ears among the Mopanis. Members of one of the front groups even resorted to taking refuge atop a Land Rover as they felt the ellies were getting too close for comfort. Obviously not the cycling type, these ellies.

Much of the trails in this area were within the Mashatu concession and the custodians of this land have done much to expand the cycling opportunities among the local wildlife. Some of the sights include Solomon’s wall, a 30m-high basalt dyke cut naturally through the landscape on either side of the sandy riverbed and the sacred hills dubbed Botswana’s own Mapungubwe where legend has it that ascending this mound without the correct company could mean certain death.

The routes are not marked but the guides follow a GPS track that is often up to some interpretation and sometimes necessitated a bit of bundu bashing but we always got where we needed to be. The route mostly follows game and animal paths and this makes for interesting riding.  A little known fact is that elephant will always take the path of least resistance, or the flattest route, especially when they have calves, so following these routes by bicycle made for easy, flat riding. So basically, we headed in a direction on a route chosen by the animals. The route did not consist of perfectly manicured singletrack but this was some of the best riding I have ever done. This was real mountainbiking. The fact that the trails were rough, or there was sometimes no trail at all and we headed in a general direction gives a real feeling of an adventure. Nothing like elephant in the area and no real track to follow through the Mopani to awaken your sense of adventure, or self preservation. The elephant paths are linked together by sandy washes and river crossings, all dry during our visit, so if you couldn’t ride in sand before this event, you will be a professional come day four.

The flat plains are dotted with sandstone outcrops and these made for some spectacular riding, think Red Bull Hardline meets the Lost City of Petra and you have an idea of what scouting a line down this very grippy surface is like, your only clue being the animal tracks. And animals have been here for a very long time, as far back as dinosaurs. A number of massospondylus fossils have been found in the Forest Sandstones and the upper Karoo sandstones of Zimbabwe, one of them is the most complete skeleton of a Massospondylus discovered and can be viewed in its almost intact state with the hind end uppermost at Sentinel Ranch.

The basic routine on Tour de Tuli consists of an early wake up, breakfast and then heading out as the sun rises. The group then does 20-30km before a tea stop, another 20-30km to a lunch stop and then 15-20km to the days campsite.

What the event organisers do in terms of logistics is mind blowing. Tea under a baobab. No problem. Lunch in a river bed. No problem. A camp in the middle of nowhere, with hundreds of tents, warm showers, toilets and a three course meal under a ceiling of Nyala berry trees. No problem. The Tour de Tuli is a five star experience from start to finish. The riding is spectacular. The scenery mind blowing and the food and organisation top notch. And best of all it is all for a good cause.

The Land Rover owners club of Southern Africa provided support along the way, setting up at strategic points where they could keep a watch for Elephant and other big game, relay radio calls and provide snacks and water to the cyclists.

Decomissioned SAMILs, maybe left behind form the Greefswald military base carry bags and infrastructure to the next overnight stop, where camp is pitched while the riders are out on the trails.

Despite the fact that it was still properly winter in Johannesburg during July, the days here can reach 30 degrees, making this event the perfect escape from winter for a couple of days.

One of the best things about this race is that there is no cell reception or internet, forcing people to talk to each other. Normal life and routine are left behind and all that matters is riding bikes, enjoying nature and eating.

There is a large contingent of cyclists who have done the racing thing and are looking for different ways of getting their multi-stage riding fix. Events like

Tour de Tuli answer this need, by offering a great combination of a good couple of hours on the bike per day, keeping moderate to serious cyclists happy as well as touring through wildlife areas, a unique experience of crossing borders and visiting neighbouring countries and the group riding concept.

If you are looking for a different way to explore Africa or are tired of racing from race village to race village to queue for food and porta loos, be sure to give the Tour de Tuli a look. The tan will fade away, the acacia scratches will heal but the memories will last forever.

HOW TO GET THERE

Last year’s Tour de Tuli started and finished at the confluence inside the Mapungbugwe Nature Reserve. Situated approximately 80km from Alldays near the Pontdrift border and 500km from Johannesburg. Travelling from Johannesburg is easy going until Polokwane where the road deteriorates into a two way road passing small villages and game farms until Alldays. From Alldays you head North on the ??? which is strewn with potholes. Once you reach the park gate it is another 12km to the parking area. A 4×4 is not necessary but I will definitely recommend a vehicle with some ground clearance to tackle the potholes and dirt section. I also strongly advise against travelling at night as the chances of colliding with game in this area is very high. Your vehicle can only get you so far in these parts, from Mapungubwe, it is just you and your bicycle. 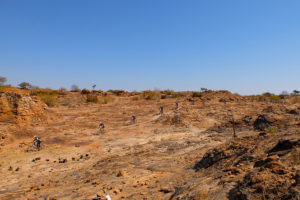 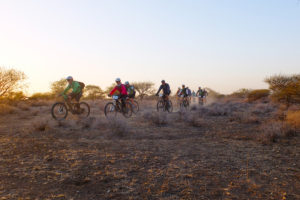 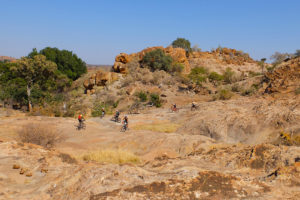 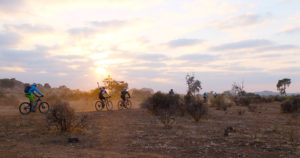 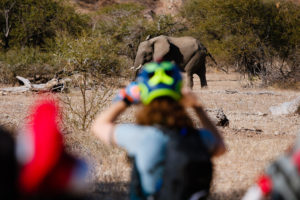