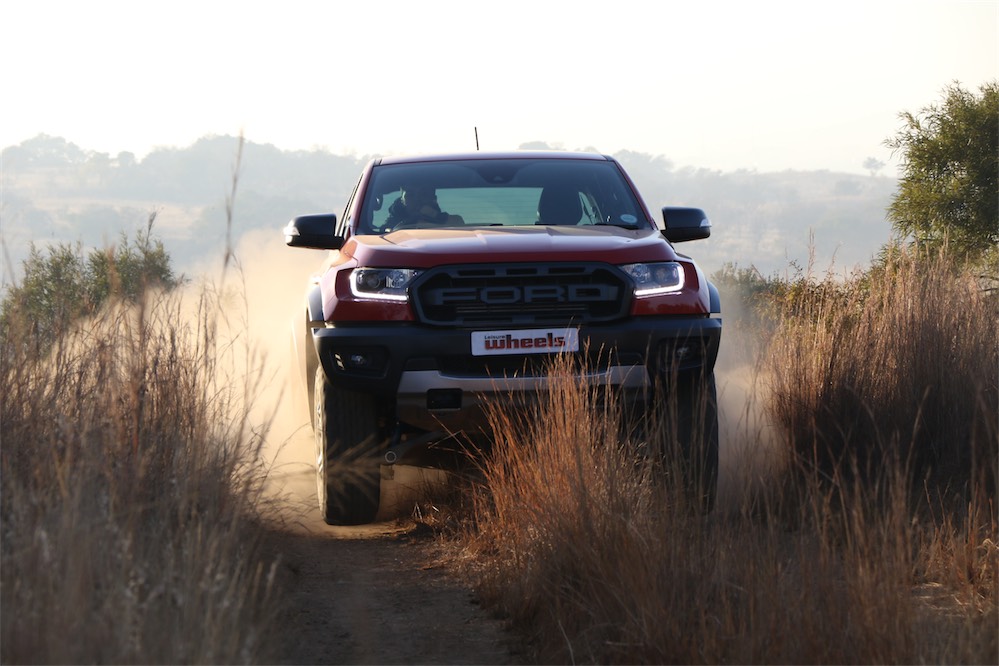 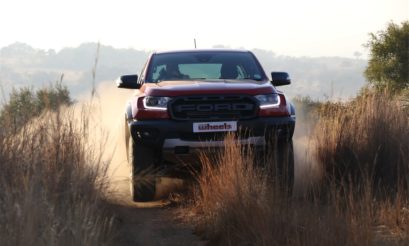 South Africans are crazy about their bakkies and in an effort to stand out from the crowd, everyone wants something different.

Ford Ranger fans, especially those in Pretoria, have been customising their bakkies with Raptor sticker kits, aftermarket grilles and bonnets for some time, taking inspiration from the iconic F-150 Raptor.

In a classic case of giving buyers what they want, Ford has finally developed a proper Ranger Raptor. This is no aesthetic job with a couple of stickers; this is the real thing, with genuine Ford Performance design and engineering excellence.

First of all, the Raptor looks the part. Larger dimensions including a 150mm wider front track and flared wheel arches – along with an imposing grille adorned with Ford block lettering – means this bakkie is immediately recognisable as some- thing special. The boytjies in Pretoria with their fake Raptor kits can’t help but look the other way.

The striking, flared composite front fenders are designed to shrug off damage from off-road usage and allow for the longer suspension travel.

Tough side steps are finished with a grippy, anti-slip material and are designed specifically to prevent rock spray from hitting the rear of the vehicle as it powers along the dirt.

A cool feature of these is that they stick out further than the bodywork, so if someone is going to open their door against yours in the parking lot, their door will hit the sidesteps and not the bodywork.

Can it go off-road?

Ground clearance of 310mm upfront and 240mm at the rear along with and impressive approach, ramp and departure angles that ensure impressive go-anywhere capability.

Underbody protection is taken care of with a 2.3mm bash plate in addition to the standard engine and transfer case shields.

The Fox Performance shocks under this bakkie are really something special. The high-performance 2.5-inch front dampers, which incorporate protruding shock absorber towers, feature twice the oil volume, an aluminium body for heat dissipation and advanced internal bypass technology that allows the Raptor to really shine when the terrain gets rough.

Local engineers spent a lot of time tuning these shocks for our conditions. Low damper forces in the middle of the range of travel give a feeling akin to a magic carpet ride. The rebound is set in such a way that when a big knock is absorbed it doesn’t bounce back immediately. In other words, it lands softly with- out bucking up, if hitting jumps are your thing.

Installing just these shocks on a regular Ranger will set you back around R100 000. But the Raptor is more than just fancy shocks. All the suspension components have been beefed up and include forged aluminium upper control arms and cast aluminium lower control arms which are stronger yet lighter.

At the rear, a bespoke coilover rear suspension arrangement features an integrated Watt’s linkage that allows the axle to move up and down with very little lateral movement.

Developing the overall handling package did not end with the suspension. The tyres were also specially developed in conjunction with BFGoodrich. These KO2s feature a higher speed rating and lower load range and in that way, match the suspension and drivetrain of the Raptor perfectly. A tough sidewall provides puncture resistance while an aggressive tread pattern ensures superb grip across all types of surfaces.

These tyres are fitted to muscular 17-inch multi-spoke alloys that are unique to the Raptor.

This fancy suspension system along with the wider track and bespoke tyres give the Raptor a planted feel at high speeds which is confidence- inspiring. The standout feature of the Raptor is without a doubt how far you can push it off-road. Speeds on gravel and over rough washaways are higher than anything we have ever experienced while the ride remains more comfortable than any other bakkie on the market.

The Raptor is powered by a Bi-Turbo version of Ford’s 2.0-litre diesel engine that delivers 157kW and 500Nm of torque and is mated to a new 10-speed gearbox.

But the Raptor weighs2 430kg and has to battle the added rolling resistance of all-terrain tyres. The result is a bakkie that might be able to cruise at high speeds on gravel but one that lacks a bit in the accelerating and overtaking department. Make no mistake, a light prod of the throttle when in Baja mode allows you to break traction and cue spectacular controllable side- ways action. But from the traffic lights, the Raptor takes 12.2 seconds to reach 100km/h and speeding up from 60– 120km/h needs 15.4 seconds.

Baja mode is designed for driving across harsh terrain at speed, just like during that legendary off-road race through Mexico’s Baja Peninsula. When Baja mode is selected, traction control is pared to allow more spirited off-road driving, like a bit of sideways action. In this mode, the gearbox is allowed to venture closer to the red line before shifting and down- shifting is more aggressive. The original Ford F-150 SVT Raptor came third in the 2008 Baja 1000 before going on sale to customers in the US in 2010. Pretoria boytjies, it is pronounced BA-HA.

The braking system has also been uprated. Front braking is performed by twin-piston front callipers, increased in piston diameter by more than 20% compared to a standard Ranger along with ventilated discs. At the rear are ventilated discs and a separate brake actuation master cylinder.

The rear load box is perfect for leisure items or tools but this bakkie has a load capacity of just 500kg. This means it will probably not be ideal as an overlander as the installation of an aluminium canopy, drawer system and rooftop tent will quickly see the bakkie near its load limit.

A modified rear bumper features an integrated tow bar with 2 500kg capacity. Two front recovery hooks are able to shift up to 4 635kg and the two at the rear 3 863kg.

Blue stitching and leather accents feature throughout, including across the high-quality dashboard. Racing style-magnesium paddle shifters allow for crisp gear changes and are easily accessible behind the perforated leather steering wheel.

When we got a new radio-controlled car as kids, after building the car, the next thing build is a ramp. Not much has changed. There are some gravel speed bumps on our daily commute and we thought getting airborne over these would be easy. But a complete mindshift needs to take place because we were not prepared for the way in which the suspension simply soaks up the ‘hit’ after we hit some speedbumps at serious speed. You need to really hit the right obstacles fast to get airborne in the Raptor. Once you grow more confident, the bakkie is a lot of fun and induces smiles at every opportunity. Was this bakkie designed solely for jumping? Probably not. But it is fun.

Where the Ranger shines is on flowing dirt roads, nothing that we have ever driven inspires you to go faster no matter the conditions and nothing eats dirty miles like this bakkie. The rear view mirror is really just there to appreciate your vast rooster tails of billowing dust.

In terms of driving dynamics, it has everything to flatter the novice and genuinely reward the expert. It is a true driver’s bakkie and that is exactly the type of person who should buy this. The kind of person who might have previously shopped in the M, AMG or GTI department store but has grown tired of getting into trouble with Mr Plod because those cars only really truly become engaging to drive at well over the speed limit.

The Raptor is a vehicle for the driving enthusiasts who are not afraid to get dirty. The beauty of it all is that you can have a tremendous amount of fun at under 100km/h. South Africa has over 300 000km of dirt roads and you cannot ask for a better toy to explore them with than this Raptor.

R800 000 might be a lot of money for a bakkie but sadly it is becoming par for the course these days. We think the Raptor is actually a bit of a bargain, given the level of equipment it is fitted with in standard trim. Sure, there are more powerful bakkies on the market but the Raptor is unrivalled in terms of dynamic off-road performance.