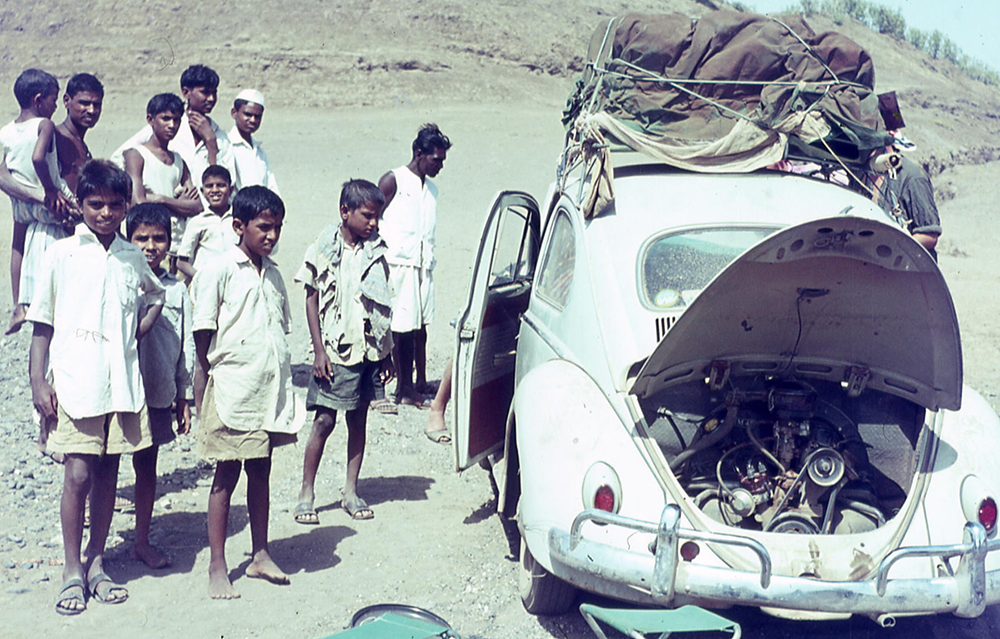 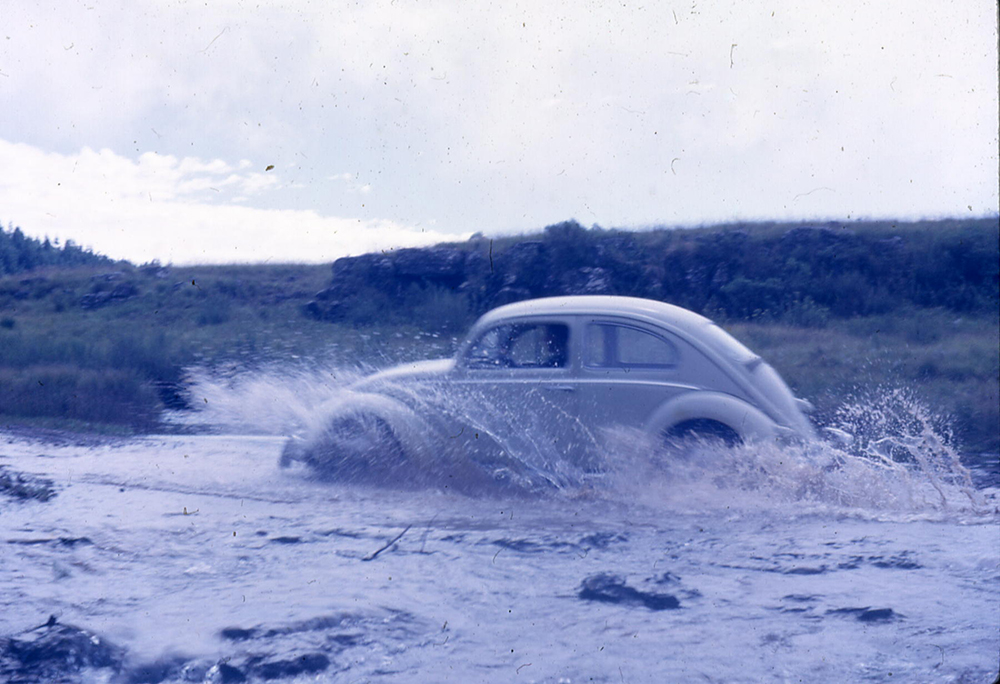 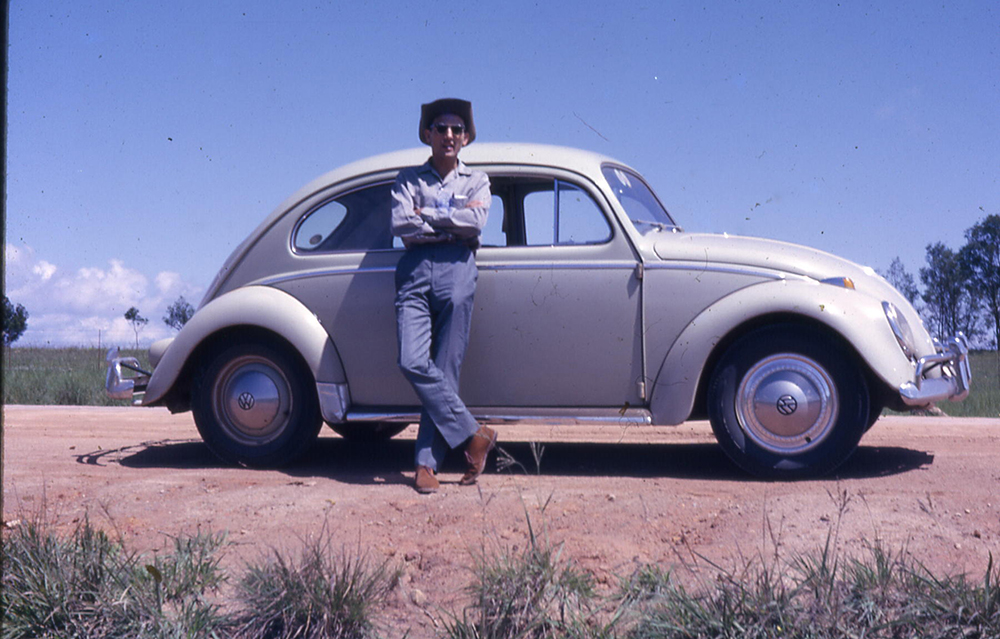 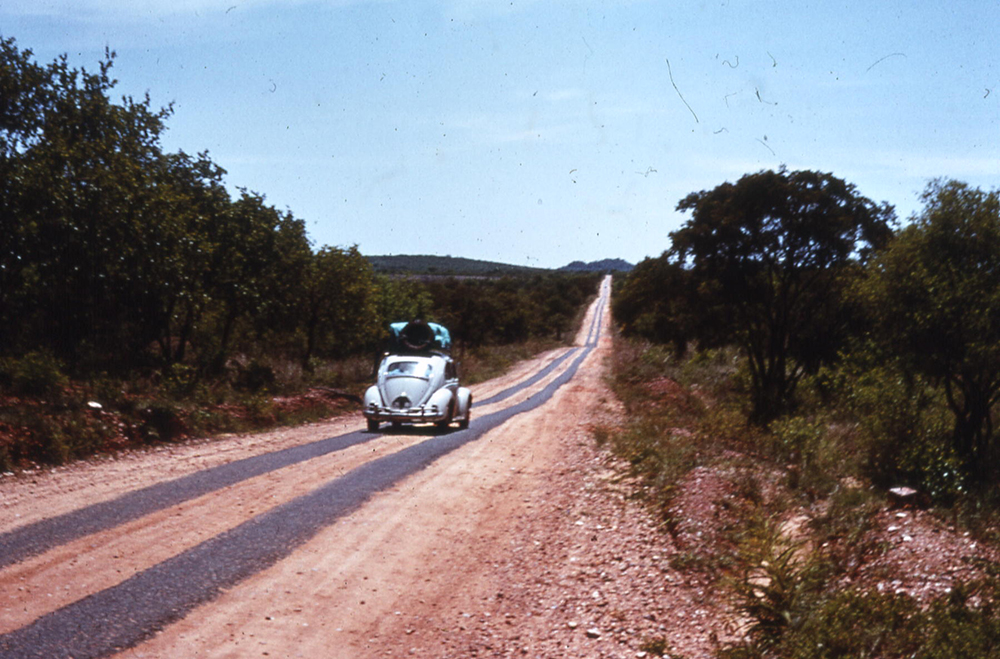 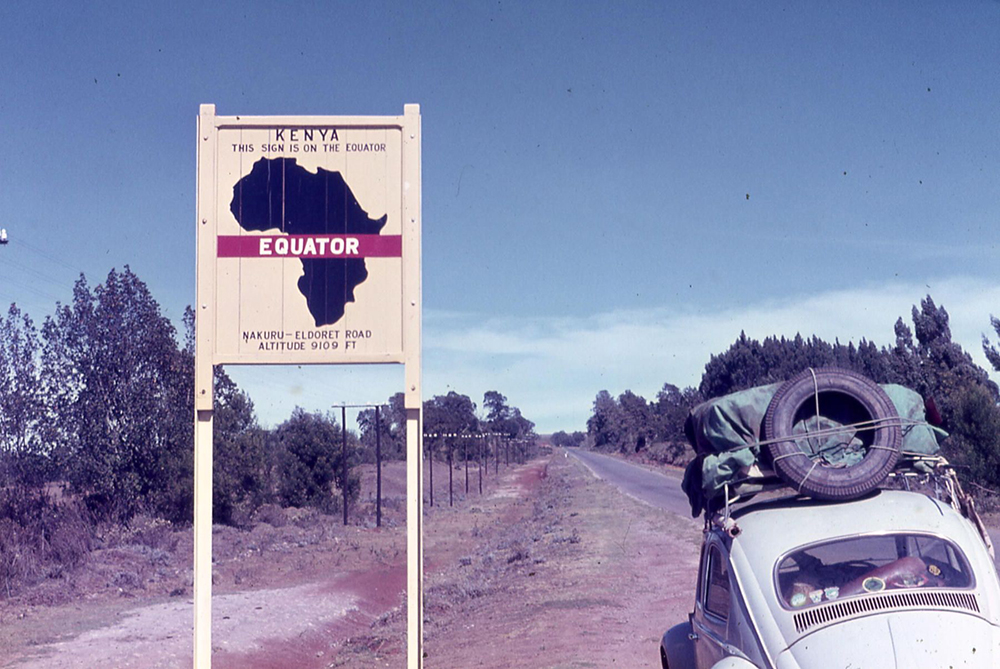 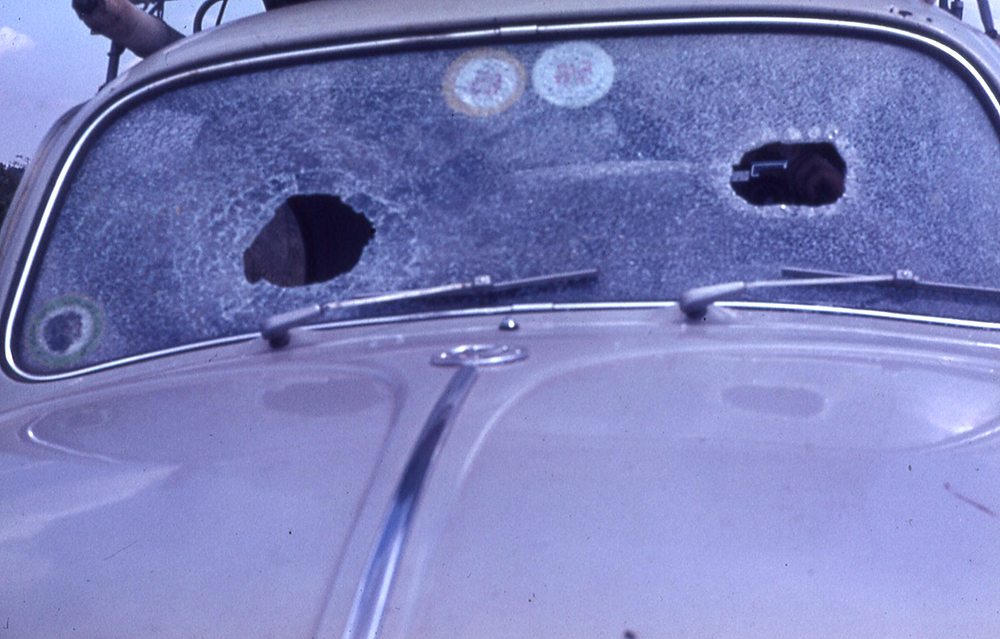 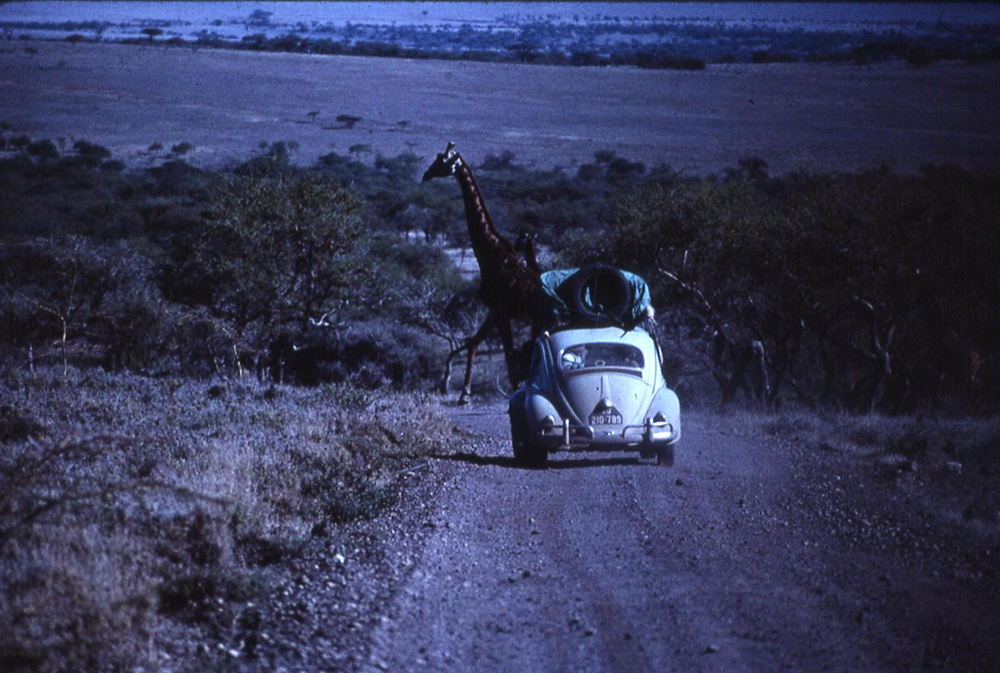 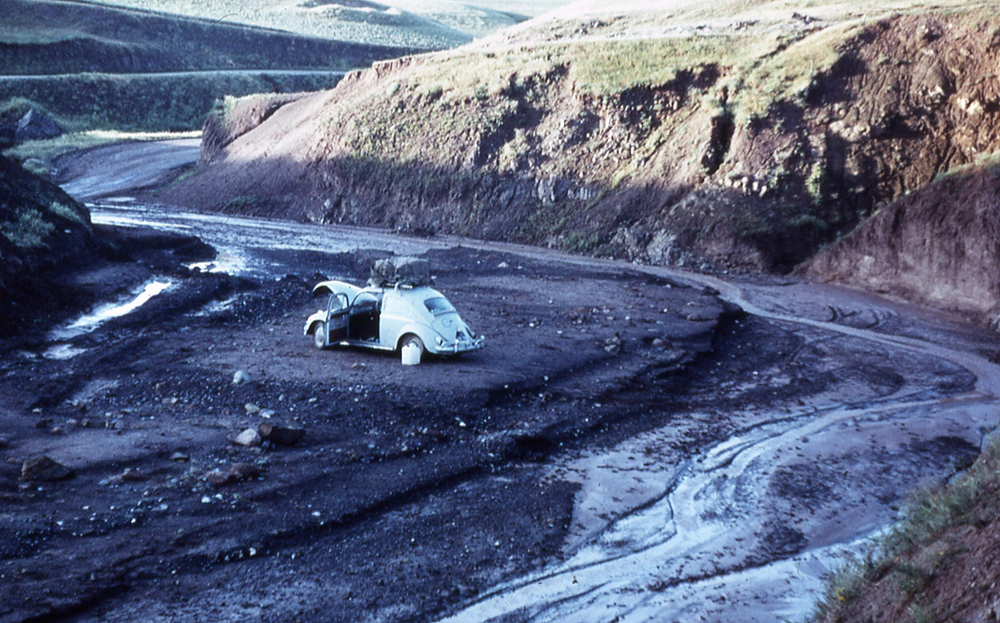 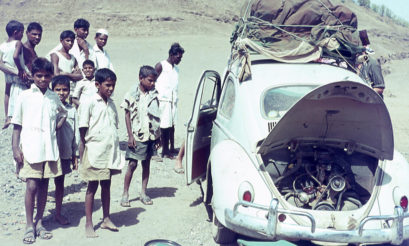 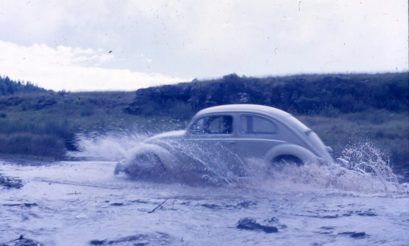 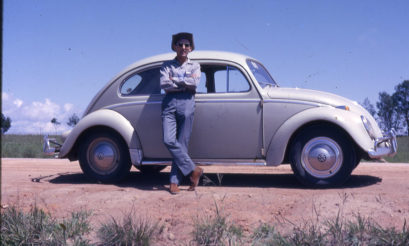 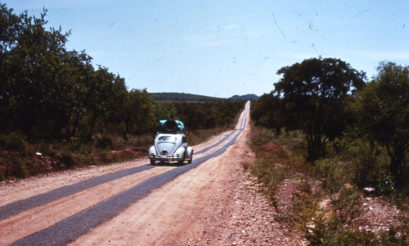 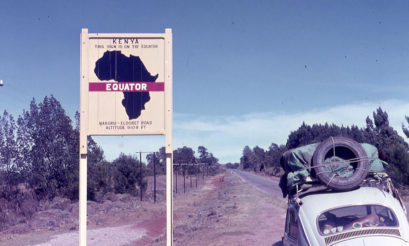 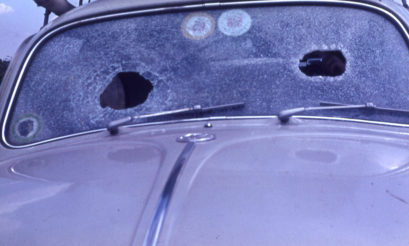 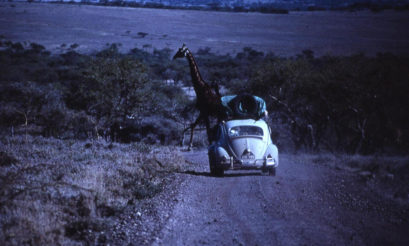 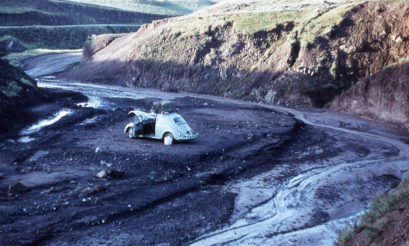 The year was 1965 and Mariano Castrillion and Dieter Baumeister decided that they had enough of South Africa and wanted to return home to Europe, so they climbed in their Volkswagen Beetle and headed North.

Dieter and I were mates, we both came to South Africa in 1963 and soon got fed up. Hillbrow was the only place for youngsters to go at night and I didn’t like Hillbrow so I decided to go back to Europe. We could have sold our possesions and bought plane tickets but Dieter was in the mood for an adventure and initially suggested that if we hitchhike then he will join me in returning back home

I had a 1963 1100cc Volkswagen Beetle, it didn’t take water so we could go wherever we wanted without fear and instead of hitchhiking we decided to take the car.

I knew nothing about cars and still don’t, so when I was looking to purchase a car initially, I was reluctant to go to a secondhand trader, because even then they had a bit of a reputation. I went to Burchmores Auctioneers, my friends said that this is risky because they do not let you test drive cars before bidding but to me this made no difference, if it works and drives it was perfect in my book. I liked the look of the car and it was in great condition. I used all my savings and bought the car for 275 Pounds.

Our preperations were fairly limited. I became a member of the Spanish AA and the issued me with the Carnet de Passage, which was necessary to cross all the border posts.

I was advised to take a supply of spare parts, but we didn’t really know what to do with these parts. I went to the person who used to service the car and he gave me a list. All I remember is the breaker or points inside the distributor, because they used to get dirty, but it was really a minimal amount of things.

We were not really worried as we figured that there are always people around who can fix cars.

We had a spade in case we got stuck in sand or mud, but we never used it. We had two stretchers to sleep on. We had a hand made tent, but that broke after two days, we then used the canvas to cover the luggage on the roofrack.

We left Johannesburg in December 1965 and travelled as cheaply as possible, with no budget for restaurants or hotels, we slept in the car or next to the car under the stars. The idea was to go through Africa, from South Africa up to Egypt and then left to Europe via the south of Spain.

We travelled through Mozambique, Rhodesia and Zambia which were still under British or Portuguese colonial rule, so it was quite safe. Nobody bothered us, we met people who spoke Afrikaans and who were glad to see people from South Africa. There was no real danger at all and there were always villages where could get food.

We followed the only road that existed, which was not always in the best condition. Kenya, Malawi, Tanzania and Uganda were beautiful places to see and the people friendly and great to meet.  Once we reached Uganda we could not go any further north because, there were wars, unrest and we required visas. We needed to make an alternative plan. We backtracked to Kenya and spent a few days there plotting our next move as we did not feel that we were done with our adventure and were not keen on selling the car and catching a plane to Europe.

In Nairobi we met two guys who were travelling from Cape Town to Cape Hammerfest in Finland, the southern most Cape to the northern most Cape in Europe with a Volkswagen Kombi and they were good mechanics, so we teamed up and camped in Mombasa. Soon we met a young nurse, who had finished her stint in Africa and wanted to head back to Europe, she hopped in the back of the Kombi and our travelling party was complete.

Together we decided we were going to put the cars on the boat that travels via the Suez to Europe, but it was terribly expensive and we couldn’t afford it. We hung out in Kenya, camping and eating and then got wind that there was a ship leaving for Bombay the following week.

The boat to India was considerably cheaper for persons and cars although we had to travel in bunk class, which is 300 people in a dormitory style layout. It was very uncomfortable and right at the bottom of the ship, in the end we slept on the deck where it was cooler. Because we were European they treated us nicely, but the Buffalo meat was just as tough as it was for everyone else.

Once we landed we toured India for over a month, visiting all the tourist attractions, Bombay and the country was fantastic. One thing about India in those days was the strong black market for currency, there was always somebody who wanted to buy our currency. They would then resell it to the wealthy people who sent it to their children who were studying in Europe. Even then the difference between poverty and the wealthy people was very apparent.

We met a Swedish couple driving a Citroen 2CV and they advised that if we had any problems with our cars we should just look for a person that knows how to fix sewing machines as they will most probably know how to fix a car, fortunately that was never necessary. It was incredible that there were so many people travelling at any given time, for you to come across other travellers is quite a coincidence as you are travelling across vast expanses and mountain ranges.

We always aimed north, our idea was to head to Pakistan which we eventually did. The people in Pakistan were just as friendly and hospitable, everyone looked after us and many invited us into their homes. At one stage we were very close to the border with Afghanistan and could have headed that way but once again we were not able to get any visas.

We decided to head via Iran. There are two options, via the mountains or the desert. We travelled the Khyber pass and the little Beetle never let us down. At one stage our friends in the Kombi got stuck in a river, and we pulled them out with the Beetle.

In Iran there was no Guerilla warefare, just people selling carpets. The attitude of the people was as good as everywhere else but it was not as overcrowded. They made the best tea in the world and they leave you alone to do your own thing, which was a welcome change after being inundated in India. We went to the Caspian sea as we wanted to try Caviar, but it was already May so we began to get in a bit of a hurry.

Next up was Turkey, where we had our first puncture. Turkey was beautiful, with fields of amazing colour combinations, the opium poppies and Tulips covering vast expanses. We visited Constantinople and saw the nicest two mosques and the capital city. But at this stage we had made the switch from tourists to travellers as we were eager to get to Barcelona.

One night in Turkey, we were sleeping in the car because it was cold and Dieter woke up to the car rocking. Somebody had stolen one of the suitcases from the roofrack and was trying to take a second one. He started chasing the person but returned very quickly as he soon realised that in the panic he had forgot to put on his glasses and couldn’t see where he was going.

From Turkey we went into Greece and thereafter we hit another roadblock. In those years my Spanish passport did not allow me to go into any communist country, so we could no longer carry on going north. Our travelling companions in the Kombi continued onwards to Finland but our only option was to load the car onto a boat to Italy. Once in Italy, we travelled through Austria and Germany. Ironically in the home of the Volkswagen we had our first run in with the police who stopped us because we had lost a hubcap. They said to us that it needs to be fixed as they believed that the hubcap clips could rip a pedestrian to pieces. After they heard where we had been they let us go.

I dropped Dieter off at his house in Munich and spent one day there. We went to a beer hall with of 20m metre long tables where lots of beer was consumed. Dieter was in his element as he was back home and he loved the atmosphere.

Now travelling solo, I got lost on the highways but eventually made my way back to Barcelona arriving home exactly six months after departing Johannesburg.

My documentation still allowed me to drive the car, on South African numberplates, for six months. During that time the ZA sticker on the rear and the Johannesburg numberplates saved me from a couple of parking tickets in the city.

After six months I was obliged to register the vehicle and pay import duties, but instead I drove to Andorra to sell the car. I went from dealer to dealer but nobody was interested, eventually a man offered to buy it for spare parts even though the only real damage was the missing hubcap and one of the exhaust tips that had fallen off near the Afghanistan border.

I got the same amount of money for the car as when I had bought it originally in South Africa, despite a bit of wear and tear, I was happy with that and like a gentleman I took a taxi to Barcelona.

The Beetle was a tough car, the roads in Africa are no joke but it sailed through without any hassles even crossing deep rivers thanks to its flat floor pan, while the rear engine, rear-wheel drive configuration ensured excellent traction and the fuel consumption was fantastic.

We had one major problem when a stone hit the windscreen on the way to Nairobi completely shattering it and leaving a hole on the passenger side. I had to make another hole with my shoe so that we could see where we were driving. Fortunately we were able to replace the windscreen in Nairobi at a Volkswagen dealer and we had the car serviced there too.

But the allure of Africa was strong. I met and married my wife in Spain. She was originally from Rhodesia and in 1969 we returned back to South Africa. The people and the weather in South Africa are fantastic and with my wife being ex-Rhodesian it was a kind of natural decision. Dieter relocated to Togo, in West Africa, not long after and still lives there today.