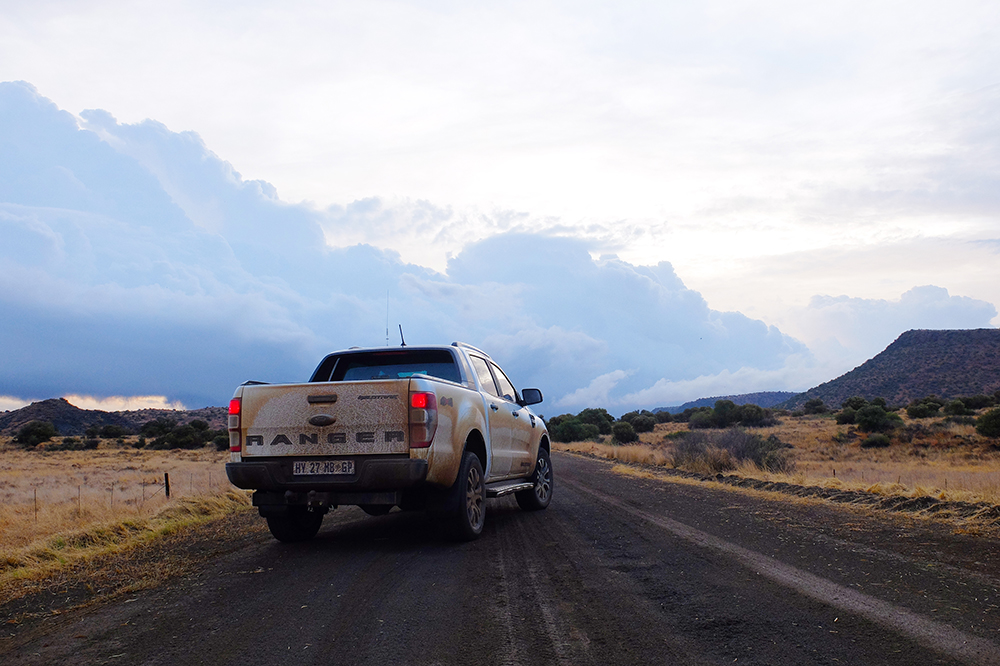 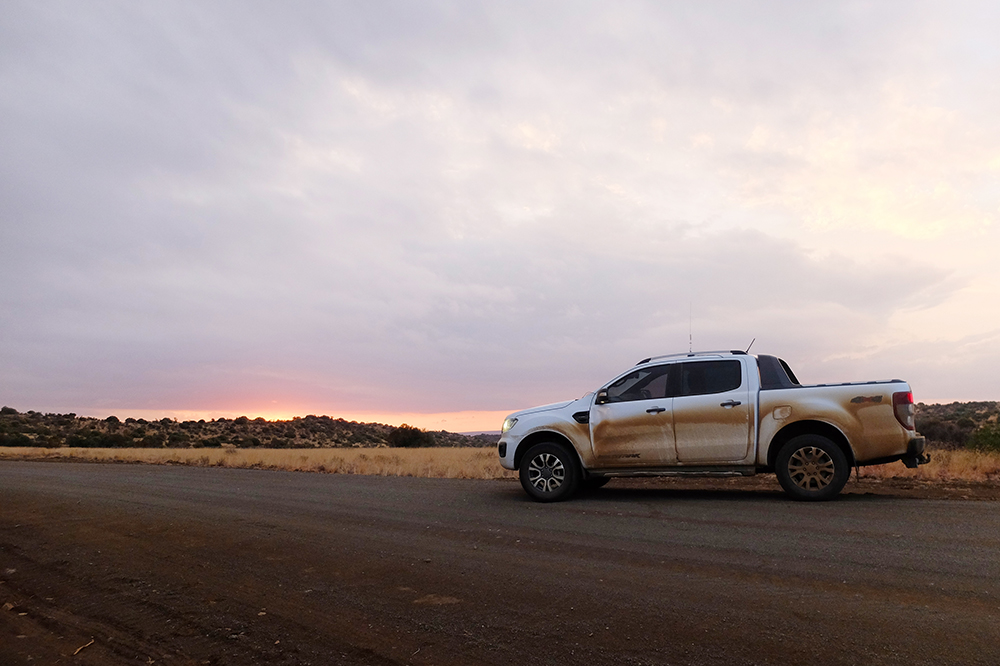 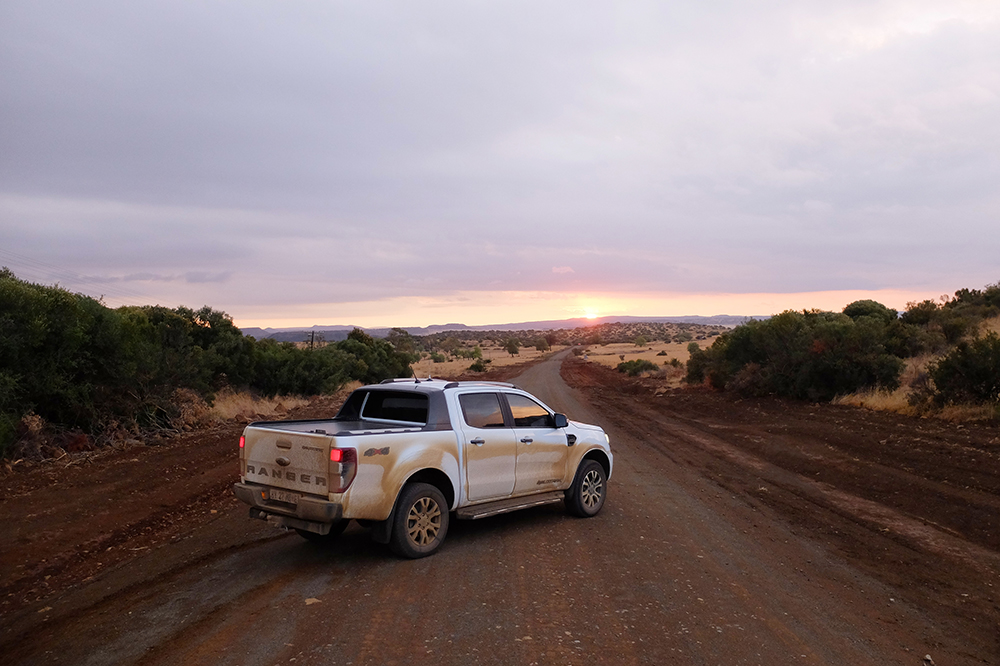 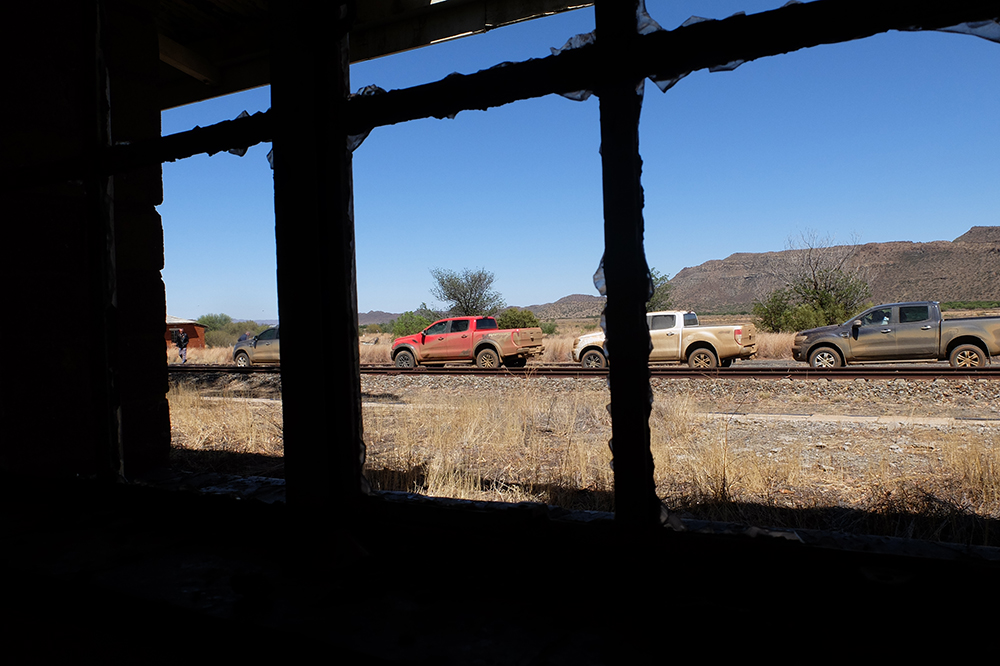 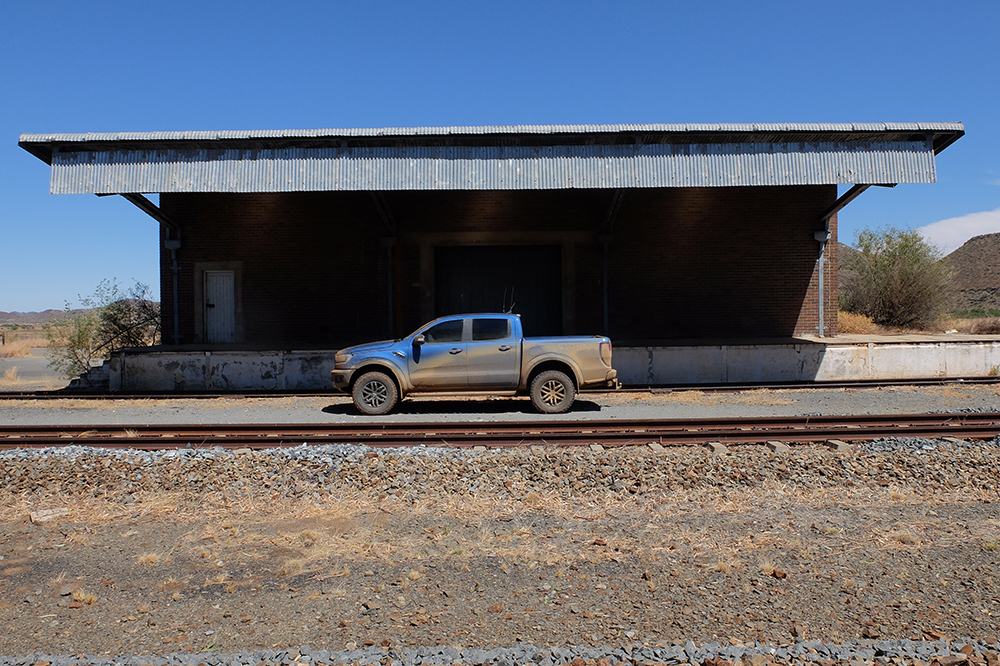 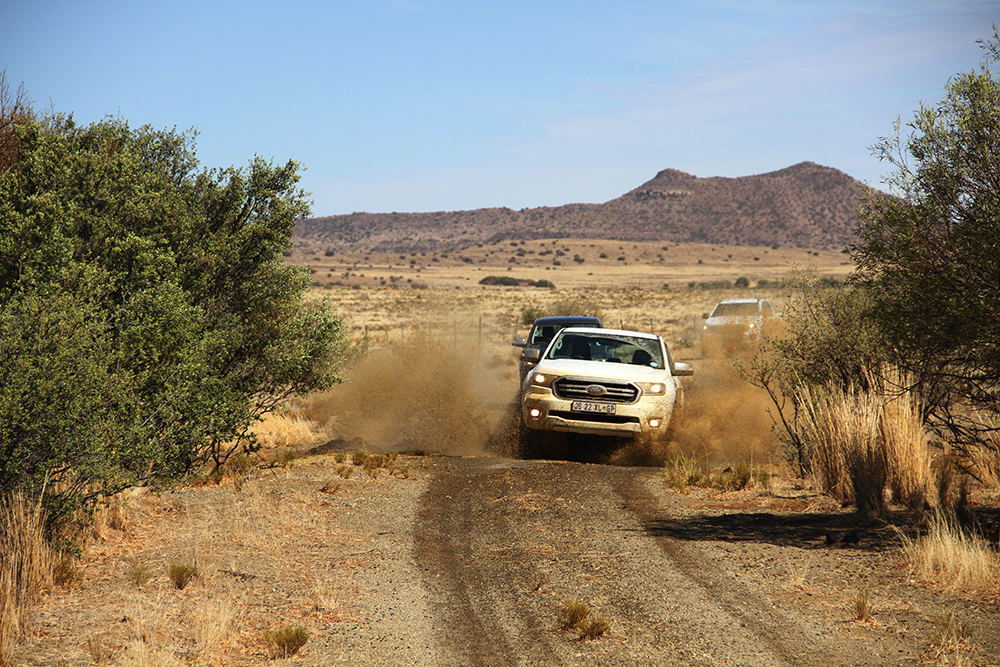 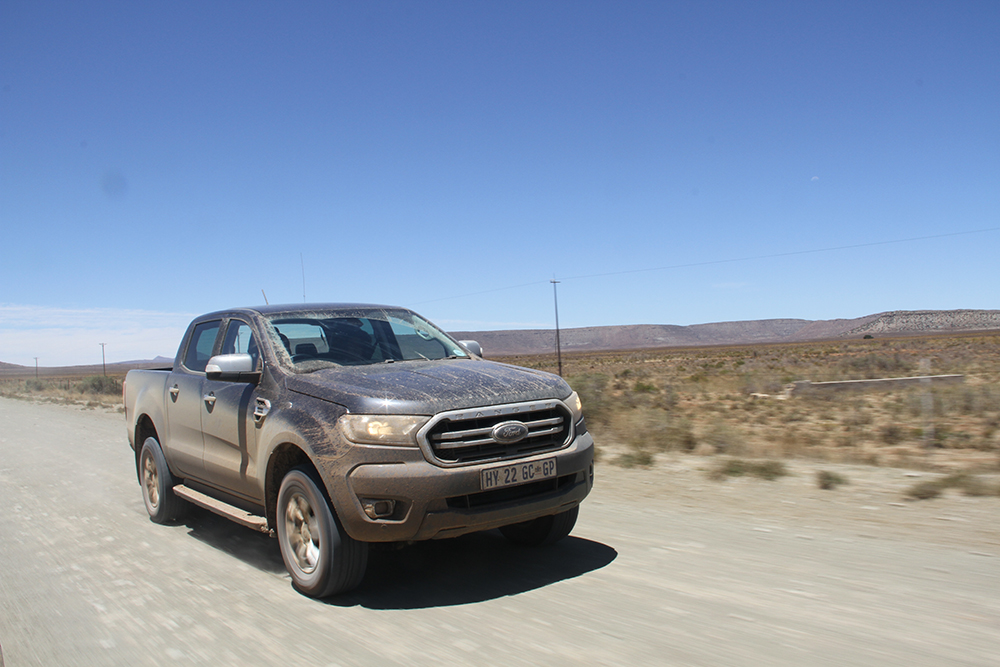 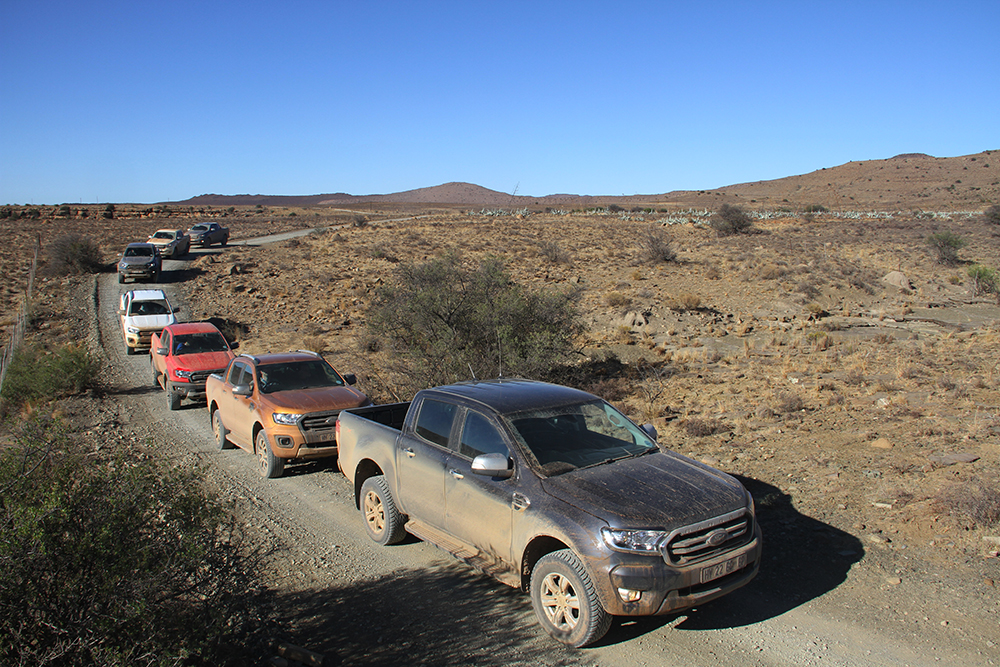 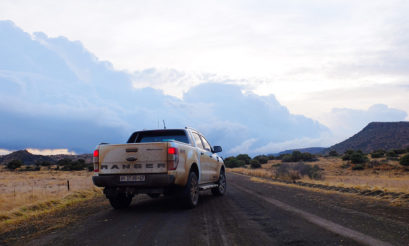 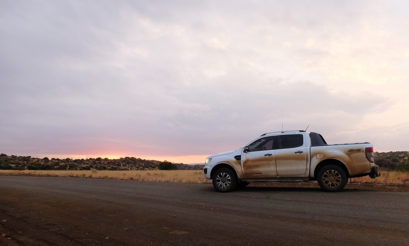 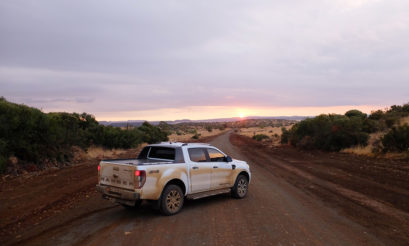 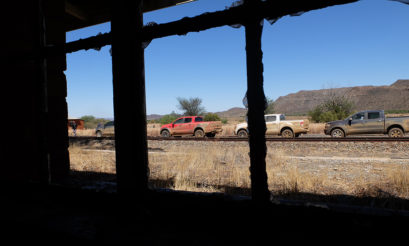 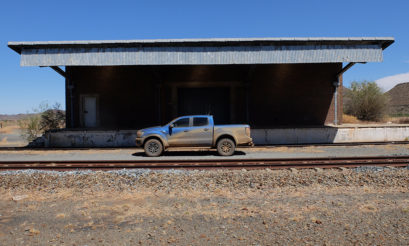 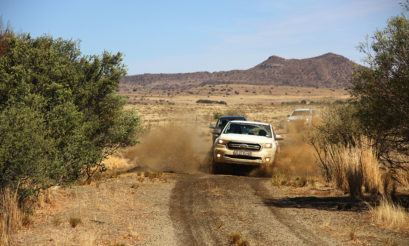 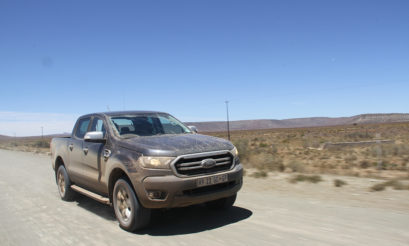 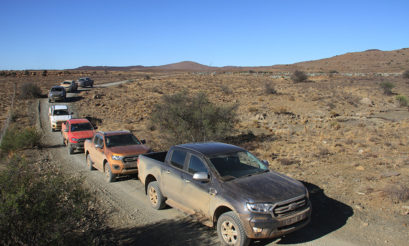 Is it possible to drive from Johannesburg to Cape Town on gravel roads only? There is only one way to find out.

It is no secret that I like a gravel roads, so much so that my favourite bicycle is one that is designed specifically for gravel road riding. If I have the option to choose gravel or tar, no matter my choice of wheels, Ill choose gravel every time.

Gravel roads are generally much quieter and can take you to some special places, they also force you to drive slower and take in your surroundings, nothing beats rolling through the countryside with the window down and the wind on your face.

So when Ford invited us to try and drive from Johannesburg to Cape Town via gravel roads only, we jumped at the opportunity.

Anything but the N1

Generally the journey between Johannesburg and Cape Town is one of those trips that many travellers loathe. The road is long, littered with trucks and actually very boring, sections like the 200 odd kilometres between Laingsburg and Beaufort West have been named the road of death because they are so boring that they will put even the most alert travellers to sleep. The queues at tollgates, filling stations and fast food joints can be enough to have you wishing that you were rather stuck in the Buccleuch interchange between Johannesburg and Pretoria on a Monday morning when the schools opened, in a thunderstorm.

There are alternatives, you can break it up over two or three days as there are a myriad of cool little towns along the way that are worth a visit. But the N1 remains the N1 and whether you take it easy or push through in one day it is nothing to write home about.

Fortunately, there is an alternative. According to Sanral there are 459 957km of gravel roads in South Africa and 131 919km of unproclaimed gravel roads, which are not formally gazetted by any authority. So there are options, plenty of options.

Our journey started near Hartebeespoort dam, between Pretoria and Johannesburg. We hit some farm roads before we reached provincial gravel roads at Hekpoort. We passed Buffelsfontein, Boons, Mathopestad, Ventersdorp and Boshoff before pulling into Wolmeranstad for a lunch of woodfried pizzas. The heavens opened but the gravel continued as we passed Steunmekaar and Jagersfontein before reaching our accommodation on the Otterskloof game farm not far from the Van der Kloof dam. This would prove to be our longest day, as we covered over 800km of dirt roads without a glitch.

Otterskloof is owned by Abel Erasmus, formerly of the renowned Wintershoek Safaris. He acquired this property in the district of Phillipolis in 2006 and this led to one of the biggest successful private game relocations that year and it is now a paradise for game, wildlife and birds alike. Sweeping across 30 000 acres of bushveld savannah, river, valley and magic mountain landscapes representing a piece of Africa as it used to be.

Day two saw us wind through central South Africa passing Phillipolis, Colesberg, Noupoort and Nieu Bethesda and our digs at Ganora guest farm. The gravel roads in this area were in sublime condition.

Ganora guest farm is situated just outside Nieu Bethesda and offers comfortable accommodation nestled deep in the slopes of a depression carved into the bedrock by ancient rivers in pre-historic times. The surrounding fossil beds on the farm bear testimony to the events that contributed to the formation of this beautiful country.

If you didn’t believe in dinosaurs before, you will after a stay on this farm.  The owners have discovered a vast amount of fossils over the years up to the point that they formally registered their fossil museum in 1998. The fossils in the collection, most of which were found on the farm, are on average about 280 million years old and the exhibit includes models of these mammal-like-reptiles that roamed the earth, pre dinosaur time. A favourite is the Compasia dela Harpi fish, which is said to be the only complete example of this fossil in the world.

Nieu Bethesda was founded around agriculture but these days it revolves around art. The town is littered with craft shops, galleries and potteries. However, for the outdoorsy types this is also awesome place to base yourself, with options for climbing, hiking, bird-watching, mountain-biking, horse riding or just stoep sitting.

Day three might not have been our longest day but it offered the most surprises. From Nieu Bethesda we headed through Richmond, Victoria West, Loxton and Fraserburg where the general dealer still sells an interesting variety of items including groceries, gas, wood, haberdashery, guns, ammunition and paraffin, talk about a one stop shop.

Between Sutherland and Fraserburg we came across a pair of South Africas finest constabulary stuck next to the road, the clutch on their bakkie had surrendered to the dry, dusty terrain. This is a harsh place, the mercury was well over 30 degrees and they were not sure if and when backup would arrive. So instead of waving goodbye, we pulled out the recovery kit and towed the pair back to Sutherland. Hopefully these brownie points count in our favour next time we are forced to travel the N1.

Sutherland is well known for being the home of the South African Astronomical Observatory and as such it attracts star gazers from all over the world. Our visit was just for a quick lunch, so I will most certainly need to return to explore this area properly.

After lunch in Sutherland the fun started as we headed into the Tankwa national Park. This road is notorious for shredding tyres and very soon the call came over the radio that the first tyre had gone and then the second. With the right tools in our arsenal the wheels were quickly swapped and we were on our way.

Our first sight of the Tankwa had everybody mesmerised and after a couple of snaps we headed down the Ouberg Pass, hoping to make it down in time for what promised to be a spectacular sunset. But Ouberg would have the final say and we lost another tyre, by this time we had our changing routine down to approximately 5 minutes and we were on our way in a flash. We made it to our sundowner spot with minutes to spare. Another tough day in Africa.

The Tankwa is bounded on the east by the Roggeveld mountains, on the west by the Cederberg, to the north by the Kouebokkeveld Mountains and on the south by the scattered foothills of the Koedesberge and Klein Roggeveld Mountains. It is an arid place with areas receiving less than 100mm of annual rainfall but the surrounding mountains make for a beautiful setting.

The following day we headed in the direction of Ceres on the R355, this route is again notorious for shredding tyres as it is covered in super sharp shale. Fortunately it had been scraped recently saving us from improving on our roadside tyre changing time. We skirted Wupperthal and meandered via towns like Klawer, Trawal, Graafwater, Redelinghuys, Aurora and Hopefield before reaching Darling. From Darling we followed a railway service road via Mamre and Fisantekraal and popped out on the outskirts of Durbanville. This was as far as the gravel would take us, for some reason Capetonians have decided that tarring all the roads up to the base of Table mountain would be a good idea.

In the end our route saw us cover approximately 2200km of which less than 100km was tar roads, mostly in and around towns that we needed to enter for fuel and supplies. I think that we can safely say that we achieved our goal of doing this journey on mostly gravel.

South Africa has a vast amount of gravel roads and our route is just one variation on covering this distance. I would suggest getting yourself a map like those offered by Tracks 4 Africa that showcases all these gravel roads and you can plot your own adventure, via the points and towns that interest you.

Naturally you need the right kind of vehicle for this mission. We had an arsenal of Ford Ranger 4×4 double cabs, including the Wildtrak, XLT and Raptor derivatives along with us on this trip and I would suggest choosing something with sufficient ground clearance, four-wheel drive is a nice to have but not a necessity. Tyres are also very important, you will want to run a slightly lower tyre pressure for comforts sake and that is best done on a set off off-road tyres that ensure a nice wide footprint, which translates into a comfortable ride.

If you, like I, believe that the holiday begins the second that you leave your home, then this might be the option for you. Travelling the country in this manner gives you a different perspective on life. You see different places; you meet a variety of people that live a different life, a simpler life. And you might just realise once again that South Africa is not such a bad place.

TIPS FOR TRAVELLING ON GRAVEL

Ensure that your headlights are always on

Keep an eye out for slow traffic and farm equipment.

Take it easy. Travelling on gravel is considerably slower going and you need to plan your days accordingly.

Be prepared. Ensure that you have a spare wheel or two and snacks and drinks, there is no Ultra City in Steunmekaar 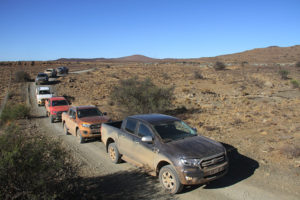 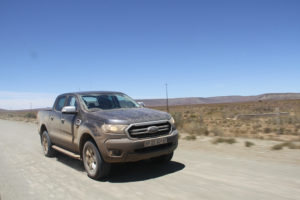 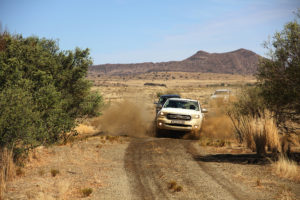 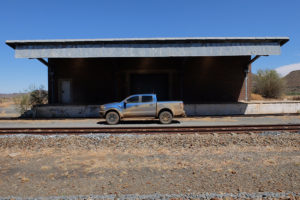 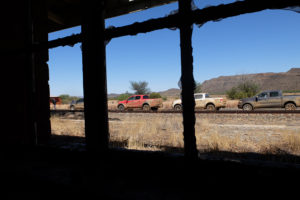 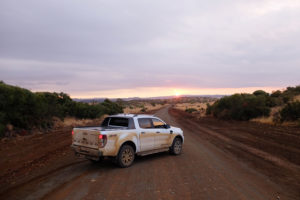 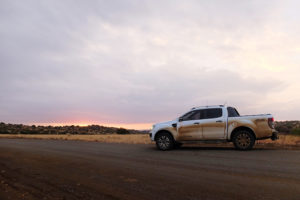 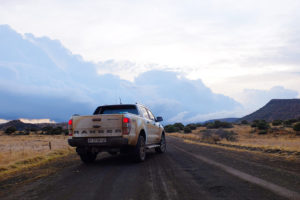