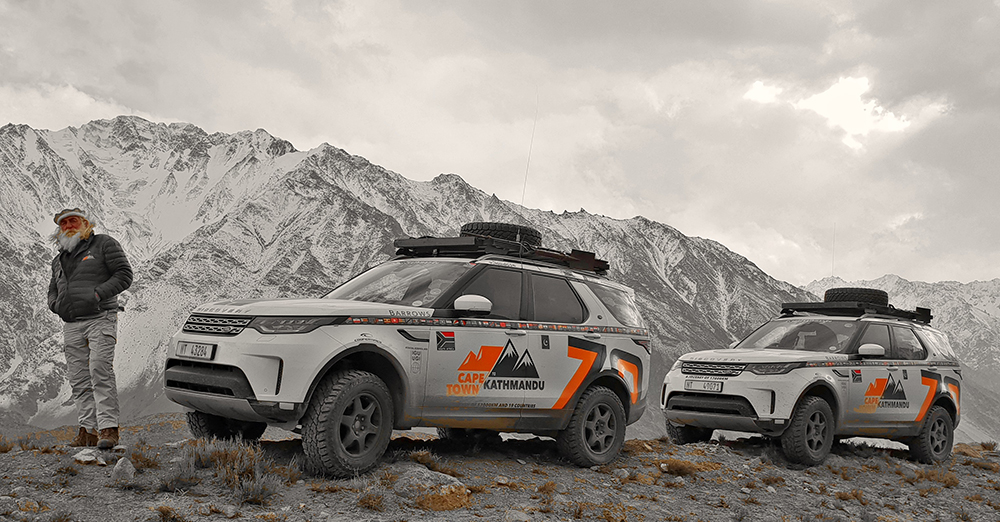 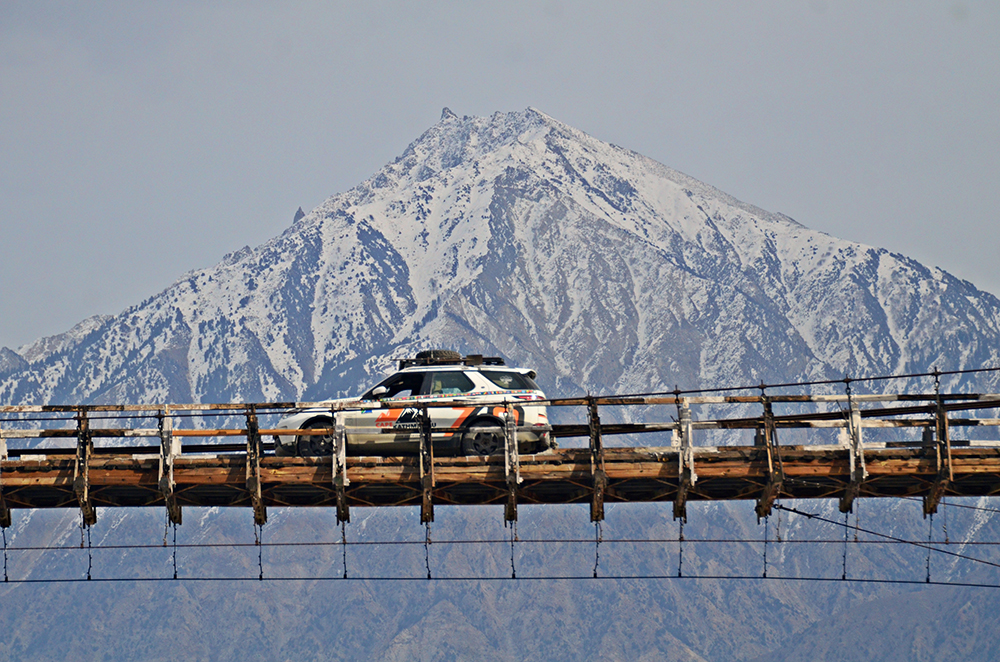 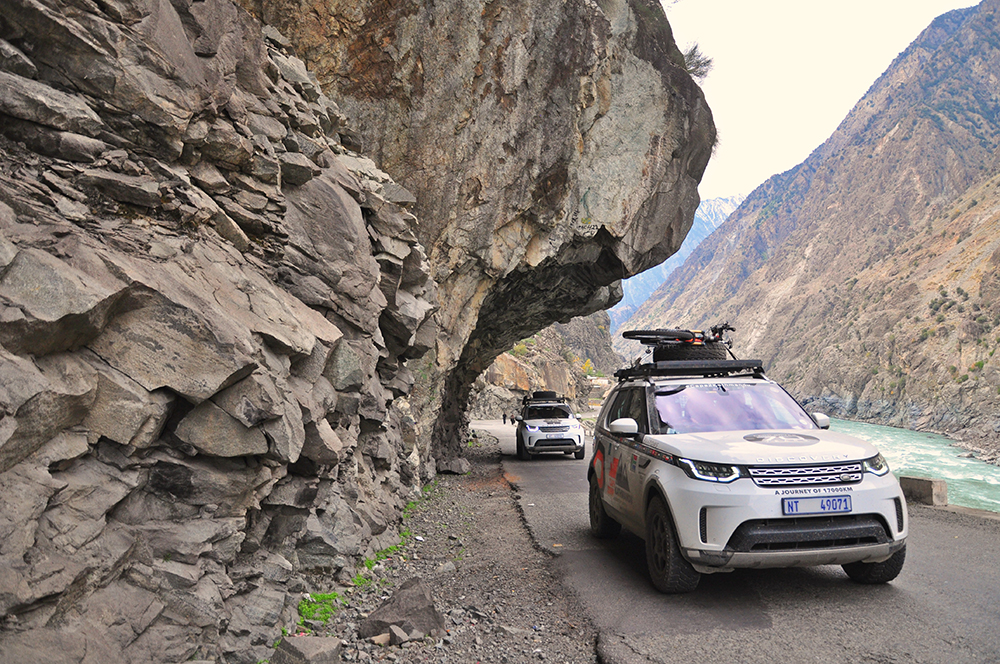 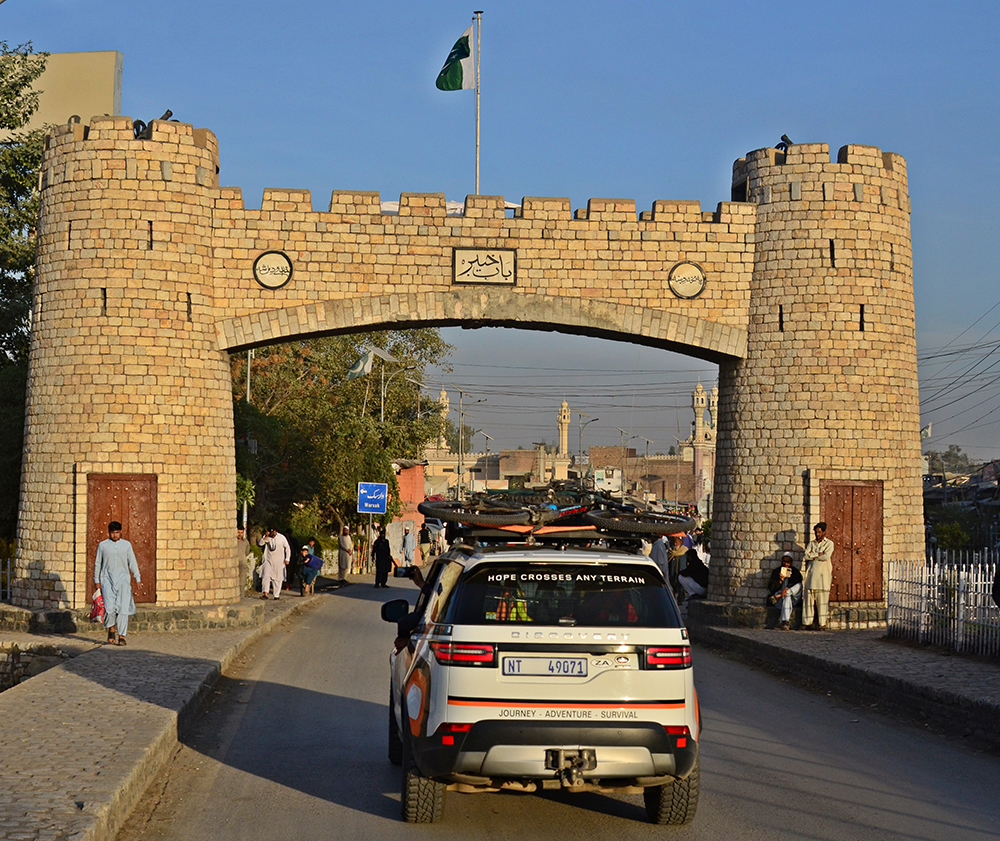 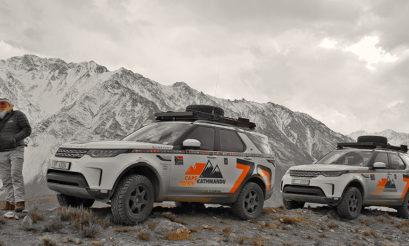 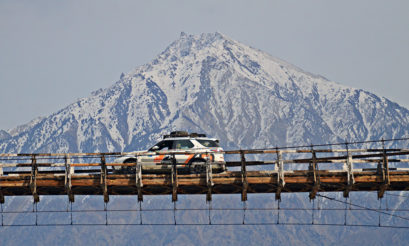 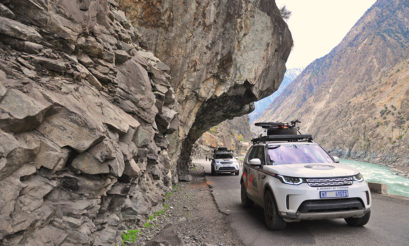 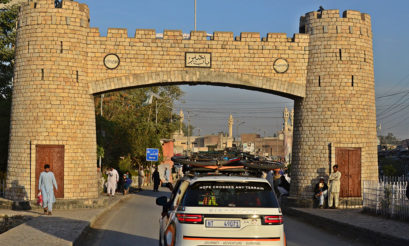 Pakistan proved to be one of the surprising highlights of the Cape Town to Kathmandu expedition for Kingsley Holgate and his team.

Escaping the grip of military convoys through Baluchistan near the Iran and Afghanistan borders, Kingsley and his team soon discovered that Pakistan’s high mountainous regions are ‘the lands of bravery and hospitality’.

Rudyard Kipling immortalized one of Pakistan’s landmarks in 1890 with the lines, ‘When spring-time flushes the desert grass, Our kafilas wind through the Khyber Pass’.  So up early, we head for the melancholy grandeur of this 56-kilometre-long road that cuts through the rugged Hindu Kush (‘Hindu Killer’) mountains between Pakistan and Afghanistan.

For more than 2 500 years, the Khyber Pass was a vital gateway between Asia and the Indian sub-continent. Vast armies and emperors including the likes of Alexander the Great, Genghis Kahn and Queen Victoria’s British Regiments tried – and mostly failed –  to secure the Pass from the feared and fiercely brave local Pathan; these fine, aquiline-faced tribesmen with piercing eyes refused for centuries to be dominated by invading armies. In the 1980s, the Khyber Pass became a major route for guerrilla fighters and refugees leaving or later returning to Afghanistan. Still today, it’s a region where Pathan warlords rule and smuggling is commonplace – everything from electronic goods to AK-47s. We’re told that other attractions include weapons factories and hashish warehouses!

Security is tight from the start, with a strong force of military Land Rovers and hundreds of disciplined, well-armed soldiers stationed every few metres. At Bab-el-Khyber, the stone archway that marks the start of the Pass, Shova Mike hops on his bike, hoping to fulfil a life-long dream of cycling one of the world’s most famous passes. But it’s short-lived: the military react quickly and after only a few kilometres, insist he climb into the back of an army truck. ‘You are very naughty!’ says the Colonel in charge. ‘We cannot protect you on a bike. Look at these tribesmen – do you know how tough and dangerous they are?’

Since 1878 (one year before the Anglo-Zulu battles of Isandlwana and Rorke’s Drift), the Khyber Pass and 1 200 kilometres of the porous and rugged Afghan border have been guarded by a picket of the famous Khyber Rifles.  Winding up twisty hairpin corners and steep gradients, we reach their post at Michni Fort with its panoramic views of the Torkham border town and the snow-covered mountains of Afghanistan. We look over a valley of tank traps, military barricades and the remains of a sloping, tunnel-like torture chamber built by the brutal 14th century Mongol invader and mass-murderer, Tamerlane (or ‘Timur the Lame’). ‘Thousands of prisoners were thrown into the top of the tunnel which had sharp knives embedded into the walls.  They landed at the bottom in pieces, some still alive,’ remarks one of the Khyber Rifles’ top brass.

At their Garrison HQ, we’re treated to lunch and a tour of historic regimental regalia, photos of visiting royalty and heads of state (Princess Diana was a firm favourite). Their immaculate Commander in Chief pens a message in the expedition’s Scroll of Peace and Goodwill, before presenting our grubby team with traditional Afghan camel-hair hats for us blokes and a Pathan shawl for Sheelagh.

We’re damned lucky: because of the high security risk along the Afghanistan border, foreign adventurers like ourselves are not normally allowed to travel the Khyber Pass. But wherever we go, there’s a Landy brotherhood and it’s all thanks to the friendly Sigma Land Rover group, who not only arranged the necessary security clearances but later organised a get-together with the Pakistan Land Rover Club in the Margalla Hills overlooking Islamabad.

We’re constantly humbled by the hospitality of fellow South Africans whilst on expedition and Islamabad proves no exception, thanks to Deputy Head of SA’s Mission to Pakistan, Christo Janse van Noordwyk and his top-notch house staff, Imran and Barbra. Within an hour, we turn his home into ‘expedition base camp’:  kit all over the place – half-filled jerry cans, sandy bed-rolls, Rite to Sight boxes, mounds of dirty laundry and piles of maps and paperwork clutter his immaculate residence. ‘I love it,’ Christo tells me, ‘What great energy!’

STANDING ON THE ROOF OF THE WORLD

For months we’d dreamed about achieving a major expedition objective – to take our Landies along the famed Karakoram Highway, said to be the highest paved road in the world.

It’s a long, fascinating and sometimes arduous journey of winding mountain passes, tunnels, wash-aways, landslides, squeezing past colourful, jingling Bedford trucks (the Cooper tyres just millimetres from the edge of dizzying drops into steep gorges, where the green waters of the Indus River tumble and meander) and plenty of police checkpoints and convoys, all flavoured with the friendliness and hospitality of the amazingly tough Balti people who inhabit this rough mountainous region, which through centuries of the Silk Route trade, has linked northern Pakistan to China.

Words cannot fully describe the breath-taking mountain majesty of this extraordinary place. We stand on the Karakoram edge in wonderment; it’s here on the ‘Roof of the World’ that the three highest mountain ranges on the planet collide – the Himalayas, the Hindu Kush and the Karakorams. This is the fabled Shangri La – the Kingdom of Lost Horizons, a land of snow leopards and bears, apricot orchards, stone-built villages and hardy people, vast glaciers, alpine deserts and a third of the world’s 50 highest mountains, including snow-covered Nanga Parbit, Pakistan’s second-to-highest after the towering 8,610m ‘Killer Mountain’ of K2, which is only exceeded by Mt Everest.

Through the picturesque Hunza Valley, we break away for some tough off-road sections of the ancient Silk Route and reach the wind-blasted Passu Glacier. It’s bitterly cold, the wind whipping up clouds of sand and grit, but it’s another high-altitude test for the expedition’s new Discoveries and they don’t miss a beat.

It’s a moment in time: a brand new, faster highway is being carved through these mountains to quicken the transportation of goods from China to the Arabian Sea. And soon, we’re told, the waters of a new dam will flood large sections of this old Karakoram Highway, which when it was built in the 1970s, claimed at least one life for each of its 883 kilometres. Change is inevitable, so it’s a special privilege to travel this ‘8th Wonder of the World’.

We’ve made it from the southern tip of the African continent to the Roof of the World – what a great feeling! But Kathmandu is calling – will keep you posted. 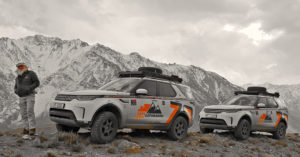 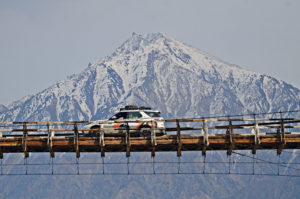 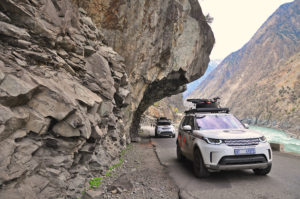 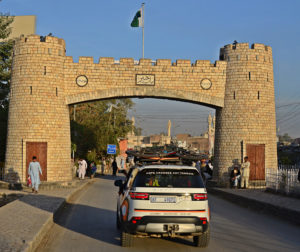