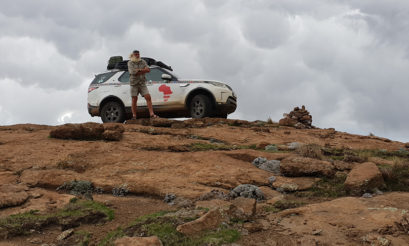 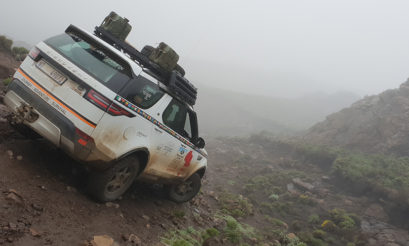 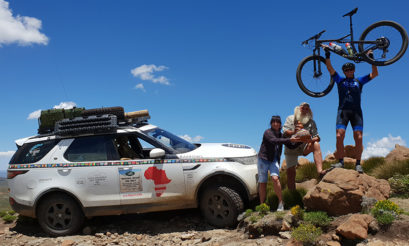 For Kingsley and crew there was no better place to kick off the year and a bright new decade than from Lesotho’s 3262m Tlaeeng summit, said to be the highest drivable road pass in southern Africa, all part of a challenging high altitude Land Rover and mountain bike expedition to tackle 100 of southern Africa’s highest, toughest and most interesting mountain passes in just 30 days!

It makes an interesting change to be adventuring close to home and not in more distant African countries as we usually are. Our neighboring mountain kingdom of Lesotho (it has the highest average altitude of any country in the world) has always been a favourite and with it having the highest of Southern Africa’s mountain passes, it’s just heaven for this ‘Riding High on Sky’ expedition. I have loads of colourful memories of earlier adventures here; on one occasion, we took a clutch of old Series 1 Land Rovers – 11 old girls dating back to 1949 – grinding and bouncing up the high passes of the Malutis and brought them all back home safely.

Now we’re at it again and given that 2020 marks the year of the new Defender, we’ve pulled in an old much-travelled 1998 model for this Lesotho chapter of the journey – her nickname is Vumbi’, which means ‘dust’ in Swahili and her dashboard is decorated with coiled rubber snakes, good luck charms and an old toy Defender the size of a matchbox. Her equally colorful owner is Graham Cooke, who has the shape of every early Land Rover model tattooed on his bicep!

Mountain passes are nothing new to our own specially equipped and well-travelled Discovery nicknamed ‘Sheba’ (because of her exploits in Ethiopia and the Horn of Africa); she’s the same Land Rover that on the 2018 Cape Town to Kathmandu expedition, not only completed the high Caucuses passes between Georgia and Russia but also the ancient high-altitude Silk Routes across Armenia, the famed Khyber Pass between Afghanistan and Pakistan and the Karakoram Highway to China, said to be one of the highest paved roads in the world.

One of our colourful expedition members is ‘seven summiteer’ (meaning he’s climbed the highest peaks in each of the world’s seven continents) ‘Shova Mike’ Nixon, one of the ‘Last Lions’ and Land Rover team member of the famed Absa Cape Epic, who is using this journey as high-altitude training for the 2020 mountain bike event. On his specialized 29-inch S-Works mountain bike, nicknamed ‘Umbani’ (‘lightening’ in Zulu), he’s doing an epic job of cracking these high mountain passes.

For added research, we’ve subscribed to Trygve Roberts’ very informative and thoroughly researched Mountain Passes South Africa website.  All of our journeys have a theme song and the obvious choice for this one is ‘Riding the Sky ‘ by eVoid, the legendary Durban band best known for their song ‘Shadows’.

It’s proving a wonderful adventure and behind us already are 16 of some of the highest and toughest passes Lesotho and the Drakensberg have to offer – with names like Sani, Kotisephola, Matabeng, Ramatsalitso, Qacha’s Nek, Mapoeneng and Lekhalong La Lesehla. We ‘ride high’ and camp wild; a circle of stones for a fireplace – this is how it must have been for the early San Bushman people, whose rock art still adorns the rocky caves of the Malutis. The views are forever, the early morning music is tinkling cow bells, bearded vultures soar overhead and the Basotho horsemen still wear tribal blankets and woven conical grass hats. But the rains have come late this year and farmers in these remote valleys are still turning the soil with ox-drawn ploughs.

After a fierce storm that threatens to blow our tents away and following Shova Mike’s mountain bike tracks, we slip-slide down the Ongeluks Nek Pass in thick, oozing mud. This 2541m pass was named in 1860 after one of the trekkers in the Griqua Trek to ‘no-man’s-land’, who died from a gun-shot wound and according to Trygve, ‘it is a tough nut to crack and has humbled many an adventurer’.  Using mud-mats and packing stones into some of the deep wash-aways to avoid sliding over the edge, we eventually make it to the friendly SA border post (there’s no Lesotho post here). In this bad weather, they were all locked up for the day and not expecting a mad man on a bike and two mud-splattered Landies to come sliding out of the mist and rain! Have to say – it was an extremely nerve-wracking descent.

Ahead of us now lie some of the toughest and most magnificent passes of the Eastern Cape – more to add to our target of 100 mountain passes across Southern Africa in just 30 days. In this race against the clock, our greatest enemy is the January heat, which in this area, calls up massive afternoon thunderstorms that turn some of the passes into running streams of mud, mountain water and even hail.

It’s damned tough on man and machine but hugely exciting and exhilarating – a constant reminder of what a beautiful place we live in.