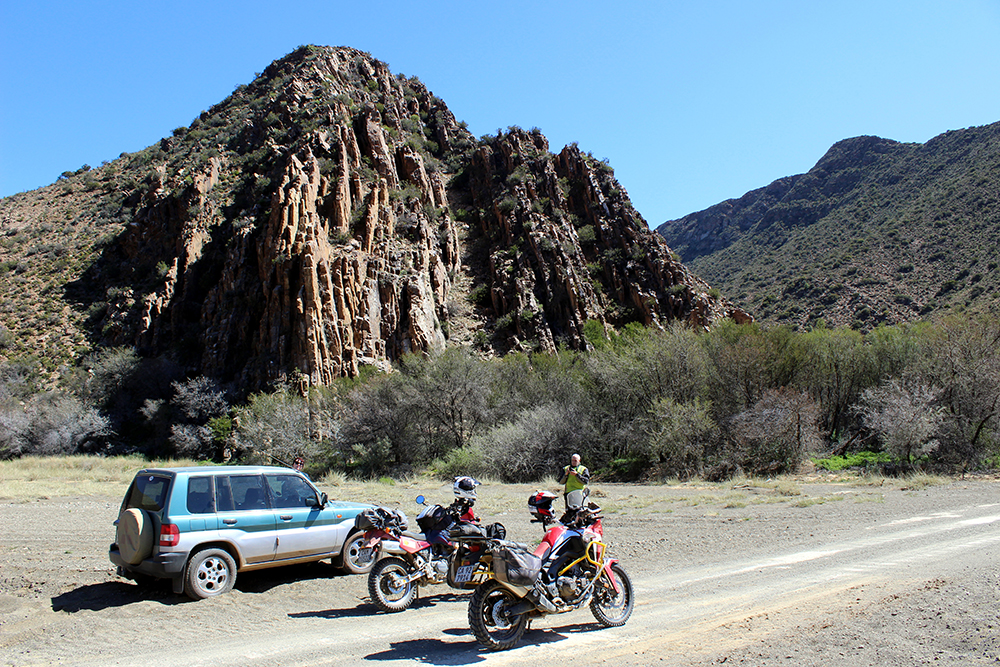 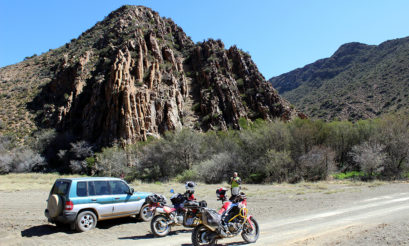 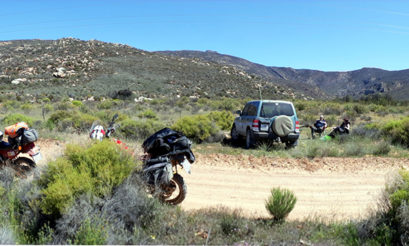 As a Long-time adventure motorcyclist and four wheel drive enthusiast, I think I may have discovered the best way to soak up the secondary back roads of South Africa.

Taking turns with some like-minded mates riding rough out front on dual-purpose motorcycles and then later switch places and take it easy in the sweeper 4×4 vehicle at the back of the convoy might be the best way to explore the backroads of South Africa.

The idea was originally born of necessity. The elderly man I’d been guiding annually for a number of years around the Karoo had suffered some health challenges not long before we were to set off on a tour of the Tankwa Karoo and Northern Cap. Although he was fit to travel, he was still a little fragile and I thought it best to ask my fiancé and travelling partner, Annette, if she wouldn’t mind following us in my recently purchased Pajero iO.

Not only did she love the idea, she spent the few days before our departure thinking how she could feed the two of us on the side of the road and broke into a frenzy of cooking and baking that saw us fattened up every time we stopped to take in views, or just to stretch our legs. In addition, comfortable camping chairs and side tables were trotted out and a whole new concept of ‘civilised’ adventure motorcycling was born.

Of course, some of my die-hard riding mates of many years think I’ve gotten soft in my old age, reminding me how many koppies we’ve scaled in the past and how many simple snack lunches we’ve enjoyed stretched out like homesick lizards on rough, lichen-covered rocks. Personally, I think they’re just jealous for not being invited on my newly structured outings.

The main purpose of these trips is to get as far from the madding crowds, and traffic and people, as early on as possible so as to be able to experience oneness with nature as soon as possible. The plan is also to avoid tar roads and only use them when necessary to connect to the next piece of dirt track; or get home fast once the expedition is over.

One of the main advantages of being on a motorbike is that you are in your environment the moment you sit on the bike. There is no steel cocoon or cool, Hepa-filtered air physically separating you from the smells, the wind and the raspy bugle calls of blue cranes overhead.

Yet, as we turned onto the Van der Stel Pass outside Bot River, I looked around to see that Annette was still following us, and by the smile on her face and the song on her lips I could see she was blissfully content in her steel, air-conditioned music box.

Our plan for the three days was to take a circuitous route through the Overberg and Klein Karoo to Oudtshoorn on Day 1, then onto Laingsburg on Day 2, heading there via Meiringspoort and Rietbron (between Beaufort West and Aberdeen) before making our way back to the N1 at Kruidfontein siding. Day 3 would see us do our last stretch of Zen dirt track between the Matjiesfontein-Sutherland junction and Touws River before steeling ourselves for the blacktop back to Bot River.

About 50 km into the journey, on the back route to Robertson, we crested the top of an unnamed pass. The bird’s eye view of the vineyard-carpeted valley below cried out to be savoured from the seat of a comfortable chair while drinking hot filter coffee from Annette’s flask and freshly baked muffins from her picnic basket. Life really doesn’t get better.

One of the sections of road I was most looking forward to that day was the stretch between Van Wyksdorp and Calitzdorp. It involves doing a third of the challenging, yet epically scenic Rooiberg Pass, hanging a right at the well-disguised Onderwagendrift farm track (buy a copy of Slingsby’s Swartberg & Klein Karoo map) 16.5 km later and crossing the Gourits River near Brakpoort.

With the recent good rains most of the Western Cape had been receiving, I was expecting the Gourits River to have a reasonable amount of water in it. As we were edging our way down the Grade 1-2 track (the track is badly eroded in places, but nothing too serious), appreciating the hardy landscape and views of the succulents and fynbos covered Gamkaberge to our left, I thought of how the bikes might try and tow the baby Pajero out of the river if it got stuck; but then quickly dismissed the possibility.

As it turned out, the river was completely dry. Our expectations of wading through torrents of freshly caught rainwater were dashed by the mass installation of sun-bleached boulders before us. In fact, our tyres did not even get damp as we crossed the ‘Twee-spoor’ through the rocky river bed; but the dirt track ahead did not disappoint.

Tracking along the tortuous gravel road that ran between the undulating foothills of the scrub-covered mountains on both sides, we ran the gauntlet of troupes of prancing ostriches on either side of the road, pretty much all the way into Oudtshoorn.

At the junction with R328 into the town, Annette took the lead in the Pajero and guided us to our guest house in the established northern suburbs. Bisibee guest house is not a typical ‘ostrich palace’, but it offers high-ceilinged space, thick walls, sumptuous furnishings and a surrounding stoep with comfortable chairs that are certainly redolent of that opulent era.

Their having a covered parking space with a black-painted concrete floor was an added attraction for me as I had some work to do on my Kawasaki KLR. Although it had just been professionally serviced, I discovered about halfway into the trip that it had seemingly been overfilled with oil and I was, at the end of a long hot day in the saddle, infuriatingly tasked with wrestling with sump nuts and hot oil rather than drinking cold beer with the team.

The Oudemuragie road — about 28 km north on the R328 towards Cango Caves — runs east towards De Rust and was our first dirt track the following day. It got its name from the farm of the same name and its origins apparently stem from the tale that follows.

In the late 1800s, the farm was a cattle post to which the farmer used to bring the livestock-minder his provisions monthly. Yet, when he arrived there one month he discovered his employee had upped and left with all of the farm’s livestock. Having made his way through Meiringspoort, the farm worker headed deep into the Great Karoo and was never seen again. The farmer packed up his few remaining possessions and trekked away from the farm in disgust, leaving the buildings to fall into ruin — and so the farm, and the surrounding region, got its name.

But you certainly don’t need to be historically-minded to enjoy this dirt track. It offers engaging driving, spectacular views of the Swartberg and the red stone hills (the latter being formed from enon conglomerate washed into these climes by the Karoo’s inland sea when it breached the proto-Swartberg Range millions of years back) and if you’re on a motorbike in November, the pungent scent of the ripening onion seed crops will fill your helmet.

Having worked our way through the curves and folded mountains of Meiringspoort after another comfortable tea stop in one of its many purpose-built laybys, we turned onto the fine gravel of the Willowmore R407. We were making for the Sotendalspoort turn-off, some 57 km distant and I was looking forward to reacquainting myself with the desiccated and almost dystopian landscape of this part of the Great Karoo — it has an almost unrivalled blankness and mind-expanding serenity about it.

It was in the dry riverbed of the seasonal Traka River that runs through Sotendalspoort that Adam handed me the keys to his new Honda Africa Twin equipped with the Dual-clutch Transmission (DCT) and said to me: “Tell me what you think.”

After being briefed on the bike’s impressive array of electronic gadgetry and making myself au-fait with the ‘automatic’, ‘tiptronic’ and ‘full manual’ gear shifting options, I set off into the boundless plains of the Karoo with a big smile on my face.

This was the second time I’d ridden the new Africa Twin, but the first time on the DCT version. On my previous ride, I remember being slightly underwhelmed by the power delivery from the long-awaited and much talked about replacement of the old version; particularly as it had gained 250 cc over its predecessor and now boasted fuel-injection over carbs. But, I realised afterwards that while Honda had upped the power to weight ratio by around 25%, their relatively low-compression and under-stressed engine has been designed to deliver more than enough usable power while maintaining their legendary reliability.

The DCT version, however, seems to have somehow derived the maximum from the new Africa Twin’s 95hp motor. I realised this when I had it in ‘Automatic’ mode (with Traction Control on 1 – highest is 3 – ABS off on the back wheel and the Gravel option selected) and took it to the change limit in each gear. I was soon cruising along a corrugated dirt track at Dakar-like speeds and there was plenty more vooma available via my right wrist.

But the biggest accolade I can give this bike is that it feels incredibly planted, yet agile at the same time. The excellent suspension, low-centre of gravity and perfect balance give the new Africa Twin the feel of a much lighter enduro bike; a characteristic which combined with its other electronic gadgets adds loads of confidence to your off-road riding ability.

It was only when my stomach started to growl louder than the Africa Twin’s exhaust that I ended my enthralling test ride. Sitting comfortably in the Karoo veld, surrounded by the purple blossoms of thousands of flowering succulents, we enjoyed a picnic lunch of kudu biltong, Salticrax with smoked mussels followed by Florentines and coffee for dessert.

And even though we still had another a day of this sort of civilised back road touring — the best of both worlds — to come, I was already planning the next trip in my mind; not difficult  in a vast and beautiful country with nearly 600 000km of gravel roads to choose from.

Best time of year to go: April to September. 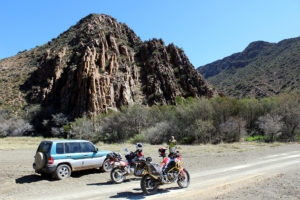