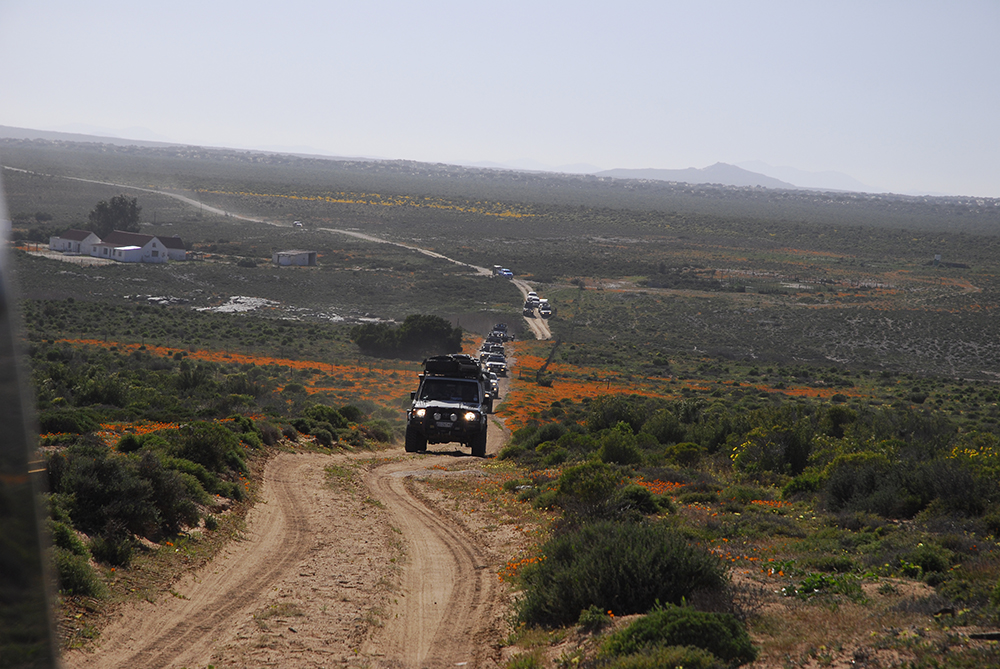 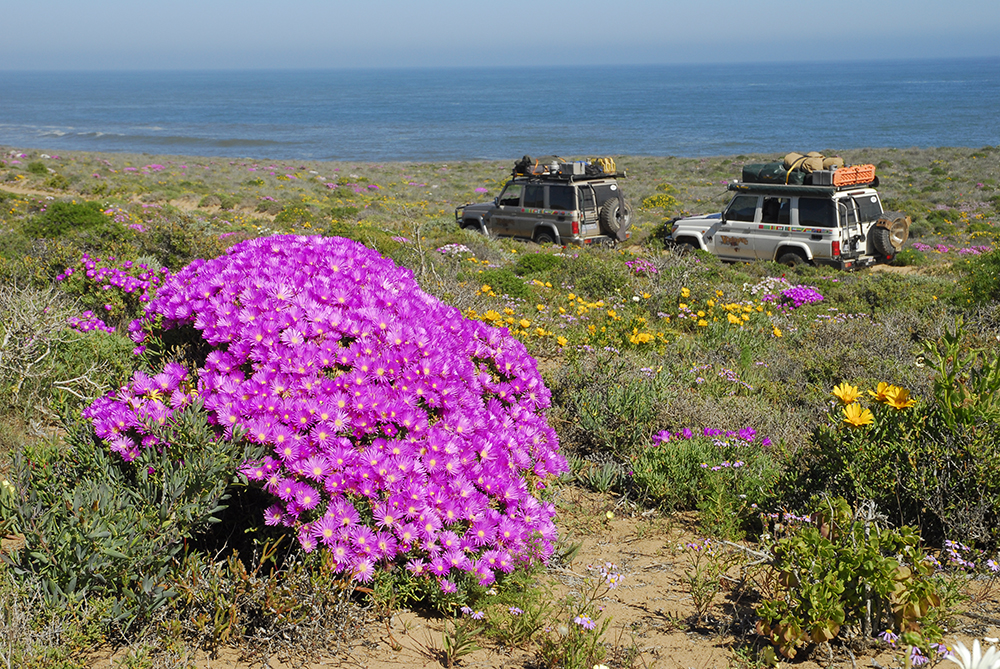 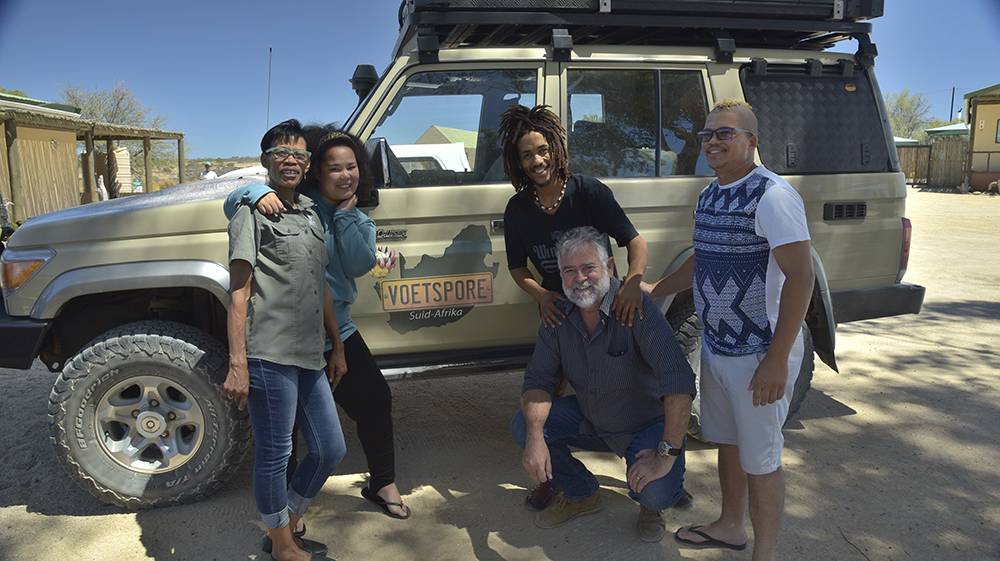 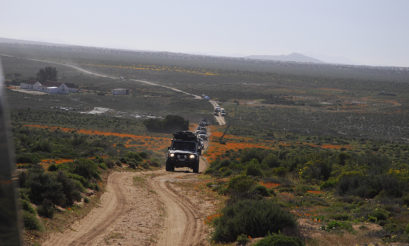 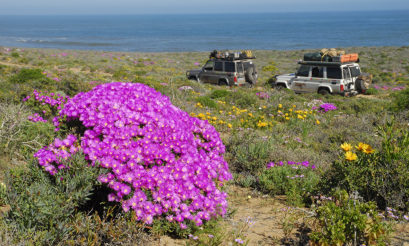 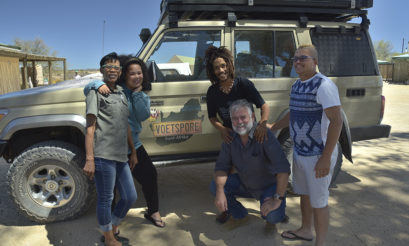 Voetspore’s Johan Badenhorst visits one of the youngest National Parks in South Africa and is reminded to be cautious about where you fill-up.

The flowers of Namaqualand are internationally known for their uniqueness and beauty. People from all over South Africa, and indeed the world, flock to this semi-desert during flower season in late winter, early spring, to observe nature in all its splendour. I’ve always thought of it as a must see, but probably for a day when I am over 75 of age, travelling in a group by luxury bus, eating mostly stews during lunch and dinner, and going to bed at eight at night. Recently, however, I drove the Caracal Route in the Skilpad Wild Flower Reserve in a 4×4. What a pleasant surprise.

Skilpad is a farm that was purchased by the World Wildlife Fund South Africa in 1988 and has been managed as a wild flower reserve. A decade later SANParks took over the management and the Namaqua National Park was formally declared on 29 June 2002.

In the recent past the park grew with the acquisition of more land, and today the park stretches from the Groen- and Spoeg Rivers on the Atlantic Ocean to just west of Kammieskroon.

I started my journey in Kammieskroon. It was on a Saturday afternoon. The town was a dead as a doornail. At the Co-op the fuel pumps were locked and the gates closed. As I had to refuel (my next destination being Hondeklipbaai, where there is no fuel available), there were two options – drive to Garies or go back to Springbok, or fill up at the alternative pump in Kammieskroon. The one that was open despite the town being so quite.

One would expect that over the years I would of learnt my lesson with regards to filling up at fuel stations with doubtful conditions and equipement – the ones where you are sure water is leaking into the tanks, and the diesel on offer most probably is not as clean as is required by a Cruiser diesel V8. Yet, like so often in the past, I filled up against my better judgement. My feeling was – if this lady at this filling station is prepared to offer fuel when everybody else won’t it is worthwhile supporting her. It didn’t take long for me to regret my decision.

I set off on the gravel road toward the park. The road winds through a number of farms. You have to stop occasionally to open and close farm gates. I saw some protest banners, erected by the locals, claiming that sheep, and not leopards, should be protected. There obviously was some conflict in the area.

After 20 km I reached the offices at Skilpad. I very enthusiastic bunch of officials welcomed me. They were truly happy to see visitors to their park, even in the so-called off season. I spent some time with them and heard that they, as conservationists, struggle to convince farmers on the fringes of the park not to kill leopard and caracal.

The farmers complain that they lose up to 25% of their income because of predators. Anatolian Shepard dogs, bred and used in Turkey by shepherds to protect their flocks from bears and wolves for thousands of years, were introduced to protect the livestock. The dogs bond with the livestock from an early age and are extremely protective of their flock. If the flock is threatened he will defend them ferociously. Farmers who make use of this project report a drastic reduction in the loss of livestock. Those who previously lost 30- 40 sheep per year were now losing less than five.

Sadly this project recently collapsed, and now the farmers are once more waging war against predators, often killing leopard, bat-eared fox, aardwolf and some of the smaller cat species. I presume there will always be conflict between man and nature. We should just try and manage it as well as possible.

I left the offices and embarked on the Caracal 4×4 route. This is not a road for luxury busses filled with 70 year old plusses. It is not the most challenging of 4×4 routes, yet it is not for the novice. It is breathtakingly beautiful. It is also referred to as the Roof of Namaqualand.

Halfway through the route I suddenly heard a knocking sound in the diesel engine. This is not what you want to hear, halfway to Soebatsfontein, practically in the middle of nowhere. The Cruiser was also spitting out white smoke from the exhaust. But the vehicle was still running relatively smoothly. There was no noticeable loss in power.

I continued past Soebatsfontein all the way to Hondeklip Bay where I regained cellphone signal.

Following a couple of phone calls to Henk Lourens and Calvyn Hamman of Toyota my problem was solved. I was instructed to drain the fuel from the fuel filter and have a good look at it. I even took a picture and sent it to Henk. He confirmed – what I saw at the bottom of the drained fuel was water. As suspected the diesel I filled up with at Kammieskroon was contaminated with water, and this resulted in a knocking effect in the V8. A few years ago I learnt my lesson in Angola – it is not sufficient just to drain the filter from time to time, it is necessary to replace the filter. Always carry a spare. It is not a question of if you will need it, but when.

I continued my journey through one of the youngest National Parks in South Africa. And onto the coastal region.

Ten years ago I drove this same route from Hondeklip Bay to Groen River and beyond. Then it was during the last few days of the Casablanca to the Cape Voetspore expedition. 50 other vehicles joined us on the last leg of the longest Voetspore journey ever. During that time the flowers of Namaqualand were in full bloom. It was spectacular.

This park offers quite a variety. In flower season the daisies dominate the interior and the vygies the coastal regions. You can look out for exquisite names like Bokbaaivygie, Bobbejaanuintjie, Cape Rain daisy, Skaapbos, Bergkalkoentjie, Bushman’s Candle, Spider Lily and Yellow Snow. Amongst the reptiles are the Namaqua chameleon, the barking gecko, the flat lizard and the Cape cobra.

Birdlife too is something special. Oystercatchers and cormorant on the coast. Cape buntings, black headed herons, black korhaans, kestrels, spotted eagle owls, jackal buzzard, kori bustard and black eagles, to name but just a few, in the interior.

It is possible to spot mammals including the caracal, African wild cat, leopard, bat-eared fox and aardwolf. Keep an eye out for their spoor. Easier to see are the springbok, steenbok, red hartebeest and gemsbok.

The Namaqua National Park has plenty to offer. The caves at Spoegrivier revealed the oldest evidence of domesticated sheep in South Africa, with the carbon dating indicated that these bones were more than 2 000 years old.

Archaeologist, palaeontologist, botanist, but most of all, normal people, some of them even driving a 4×4, in search of peace and tranquillity, will find this an exceptional place. Go and visit a place called Skilpad. During the flower season there may be many others, sharing your experience. In the off season the vast emptiness may attract you. Just be cautious about where you fill up before the journey. 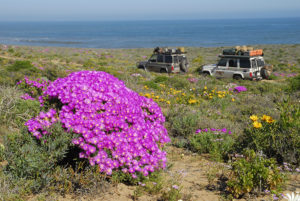 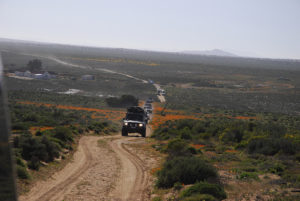 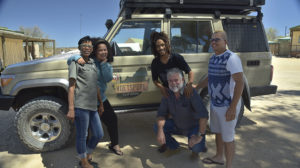