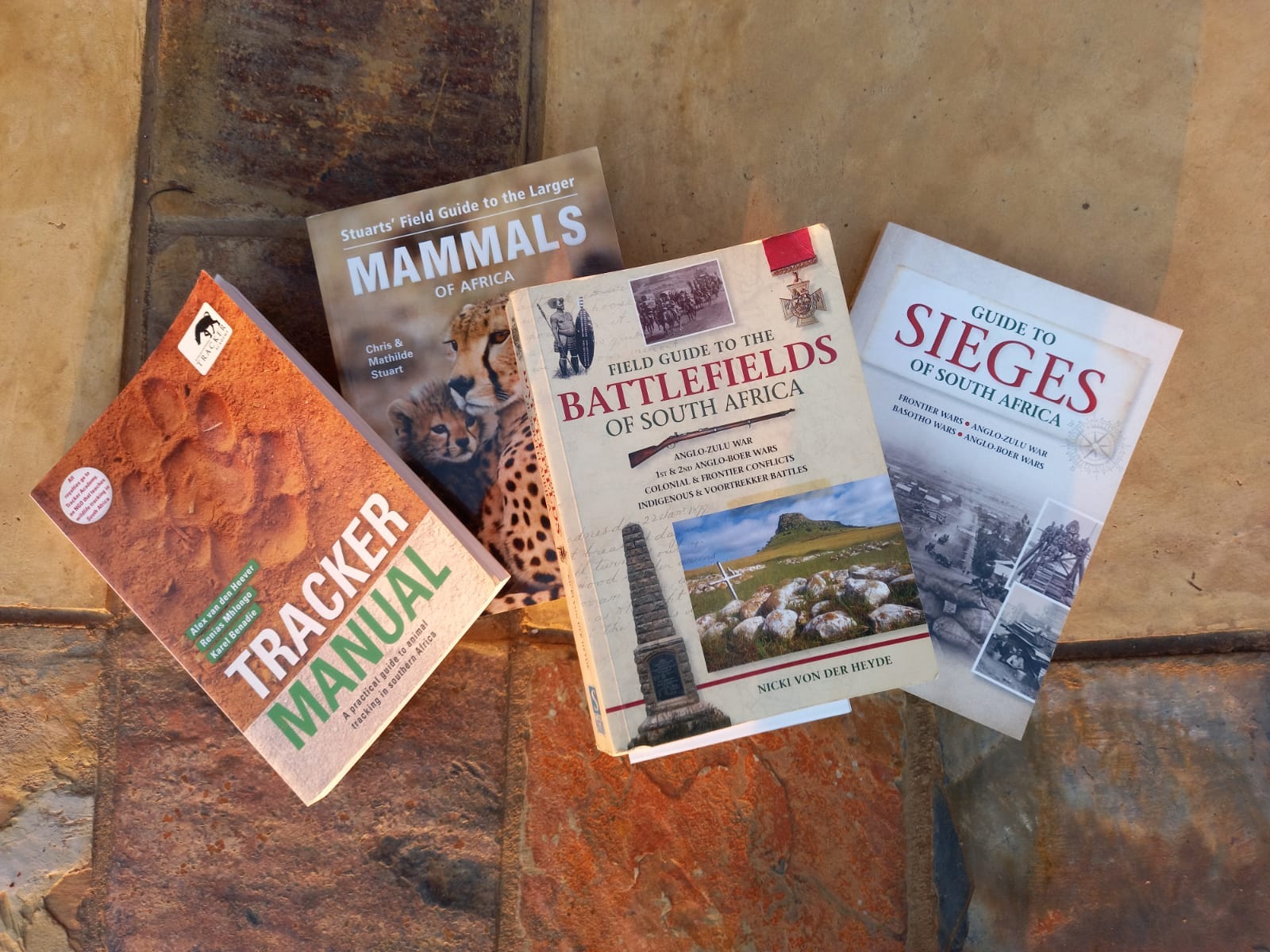 Over the course of the past few months we’ve gathered a small library of reference books that we’ve kept tucked into the Isuzu’s seat pockets. Stuarts Field Guide to the Larger Mammals of Africa has shone a light on more than a few mystery-sightings and the wonderful Tracker Manual (by Alex van den Heever and Renias Mhlongo) has settled disputes when the creature itself had long since disappeared.

It might surprise you to hear though that the two books we seem to grab for most often are books on battles.

South Africa has such an entangled martial history that it is almost impossible to keep a track of skirmishes, pitched battles and drawn-out sieges of the first and second Anglo-Boer wars, the Anglo-Zulu war, the Voortrekker battles, the frontier wars, the indigenous wars…

A fleeting insight to all these power-struggles might lead you to the conclusion that historically South Africans (of all races) have spent a lot of time being besieged. (Nicki von der Heyde’s excellent Guide to Sieges of South Africa provides intriguing background to 17 of these.) If you want to better understand South African history you need to read this book… if, however, you want to get the most out of your travels around this fascinating country you should make permanent space in your vehicle for Nicki’s 2013 classic Field Guide to the Battlefields of South Africa.

Nicki von der Heyde read history at University of Cape Town and is an honorary life member of the Anglo-Zulu War Historical Society. She’s also a talented writer who’s able to explain the complex political events and military strategies (and, frequent, botches) that are a part of war. She also captures the human drama that is inseparable from such massacres. Her explanations of the backgrounds and dramatic events famous killing fields like Rorke’s Drift, Isandwana, Blood River and Spioenkop bring their stories into greater clarity.

Among the 71 battles covered Field Guide to the Battlefields of South Africa there are some that are familiar only to a few dedicated historians. And so – ‘lest we forget’ – Nicki has agreed to outline for us five lesser-known battlefields that deserve a detour next time you’re in the neighbourhood.

Six months after the spectacular victory of the Zulus against the British army at Isandlwana (Jan 1879), the British defeated the Zulus on open ground at Ulundi.

The battlefield is demarcated on the lines of the original ‘British fighting square’, a rectangular formation of soldiers and wagons defended on all sides by artillery and shielding the horsemen. The Zulu ‘horns of the buffalo’ strategy was unable to penetrate the square.

The monument is an unusual dome, and the site overlooks Ondini, site of the Zulu king’s original palace.

Lord Beresford was awarded a VC for rescuing a man who had been unhorsed. He refused to accept the award unless the trooper who had assisted him was also rewarded.

This battle marked the end of the Anglo Zulu War of 1879.

Unspoiled battlefield; the open ground over which the Zulus advanced is as it was on the day of the battle. The horns of the buffalo strategy employed by the Zulu can be well appreciated here. The graveyard gives tribute to both the Zulus and the British who fell. The British gun emplacements can be clearly seen. The Zulus lost almost 2,000 men and never again fought with such vigour and bravery.

The Battle of Willow Grange. November 1899

(between Estcourt and Mooi River)

This is one of the first battles of the Anglo Boer War (1899 to 1902). The site is unspoiled and the stone wall along both sides of which the British advanced, is still there. Trooper George Fitzgerald (brother of Sir Percy Fitzpatrick, author of Jock of the Bushveld) is buried in the graveyard. The British hauled a massive naval 12-pounder gun up the slopes of a hill overlooking the present N3 highway. The scars on the hillside are still visible. Horses and men on both sides were killed by lightning. This battle marked the end of the Boer’s advance southwards towards the Port of Durban and ended their hopes of blockading the port and preventing the arrival of British reinforcing troops.

The Battle of Elandslaagte. October 1899

(between Ladysmith and Dundee)

There was a party at the railway station attended by soldiers on both sides, shortly before the deadly battle was fought. Boer and British monuments stand on two small hills, one on each side of the approach road.  It was one of the very last true cavalry charges performed by British cavalry and the last time the Dutch commando fought as a separate unit. The imperial German army later adopted this battle as a perfect example of the ‘set piece battle’ of that era.

The Battle of Vaalkrans. February 1900

(between Ladysmith and Estcourt)

More artillery shells were expended during this battle than in any other battle. The Boers mounted their Huge 155mm Creusot gun on Doornkop, a hill overlooking the present day N3 highway. It was on rails and could be withdrawn out of sight after it had fired a shell. General Sir Redvers Buller believed that this gap in the hills between Colenso and besieged Ladysmith was the ‘key to Ladysmith’. The British naval Brigade managed to haul 14 guns to the summit of Swartkop, an incredible feat and the origin of the Field Gun competition held in Britain to this day.