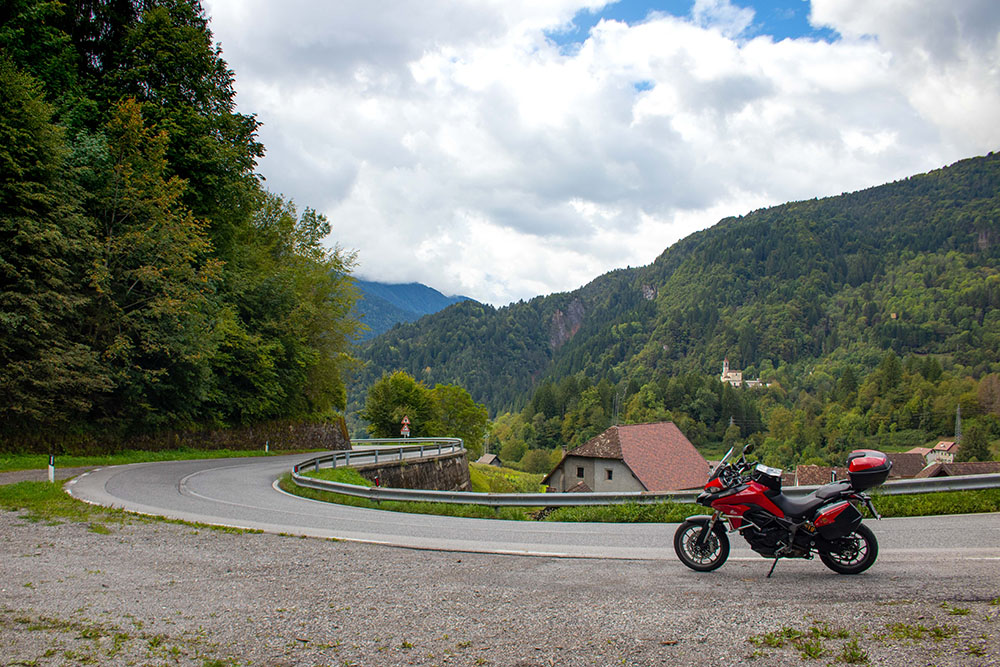 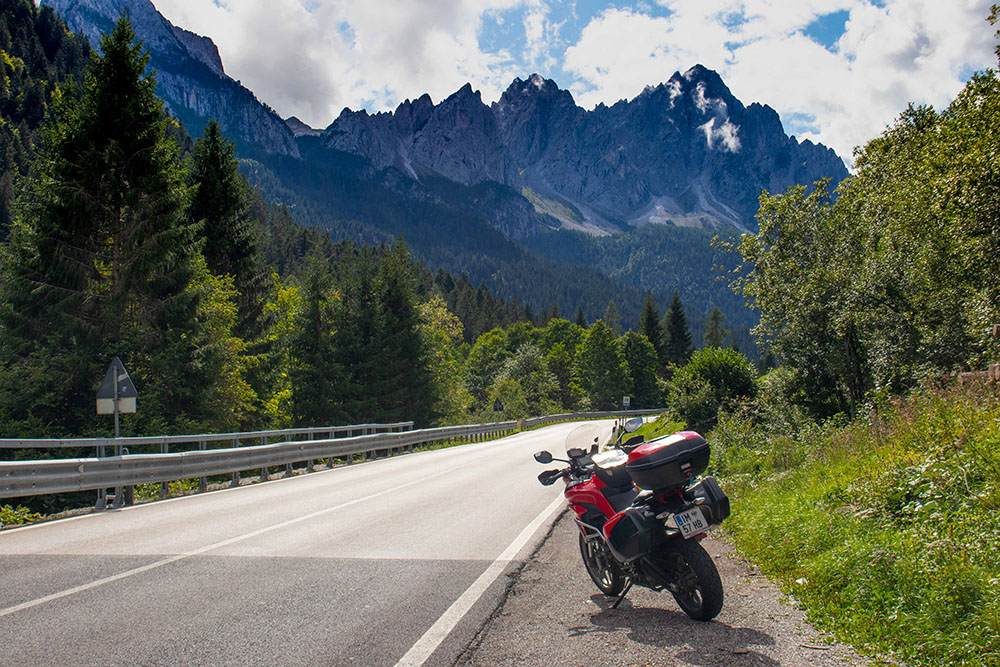 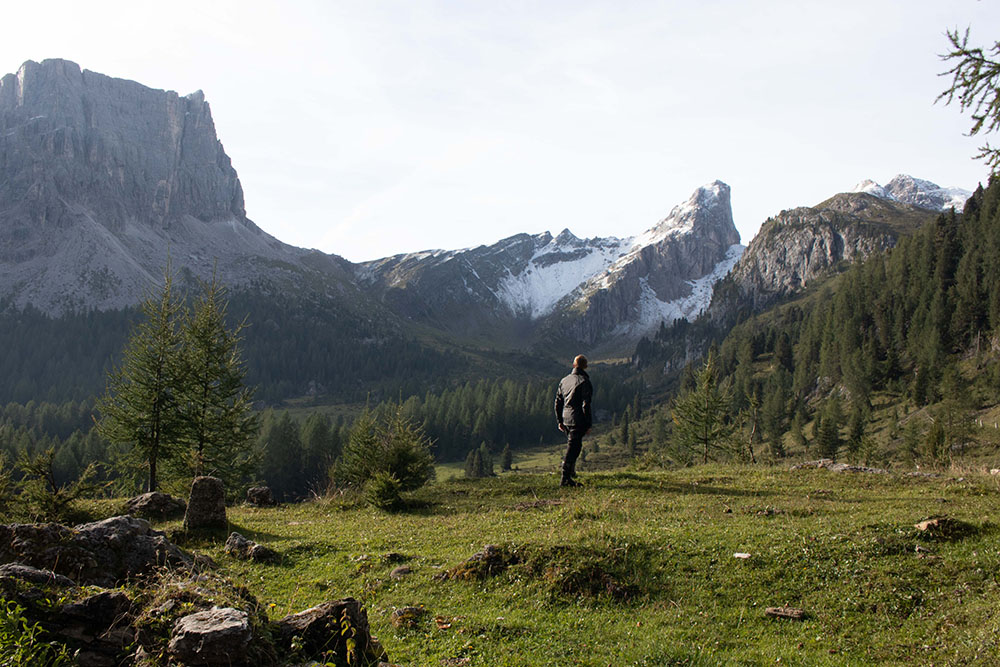 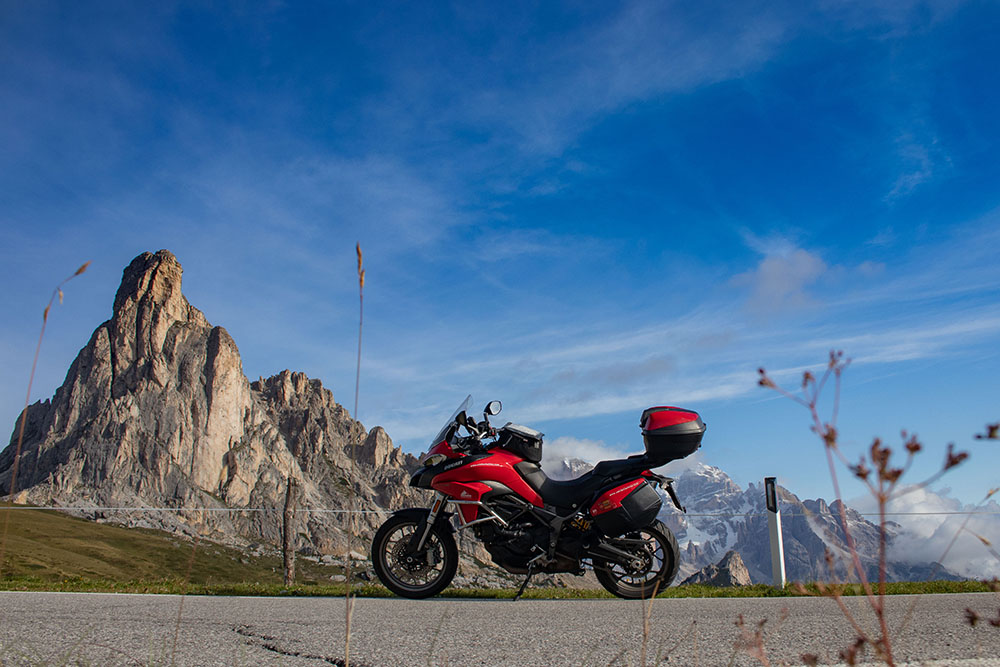 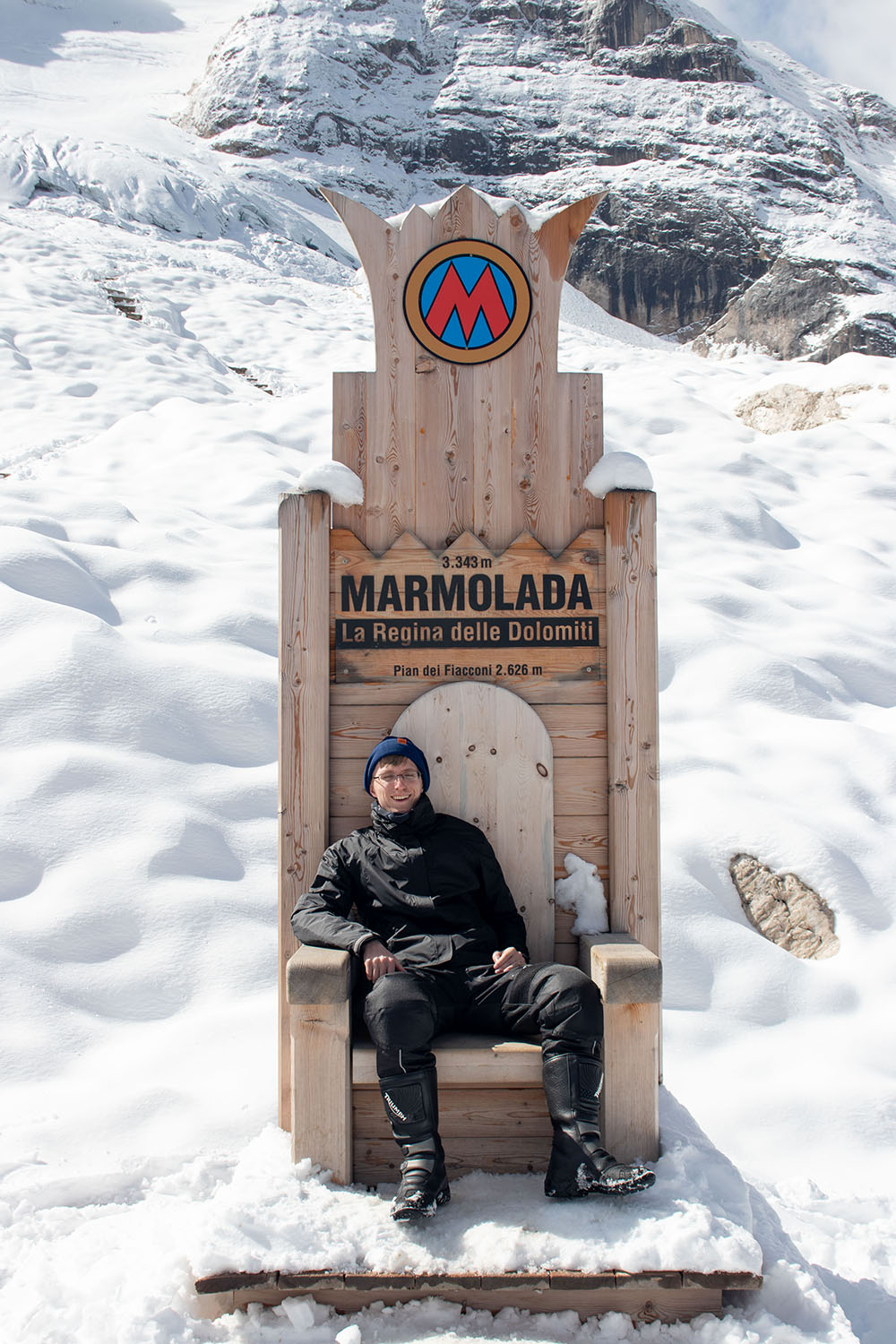 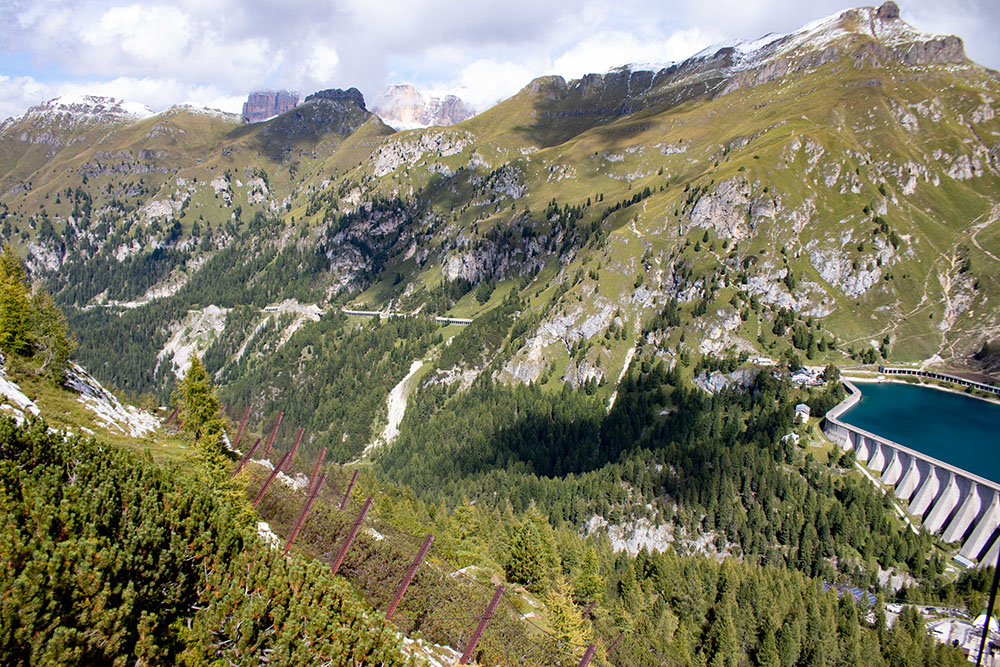 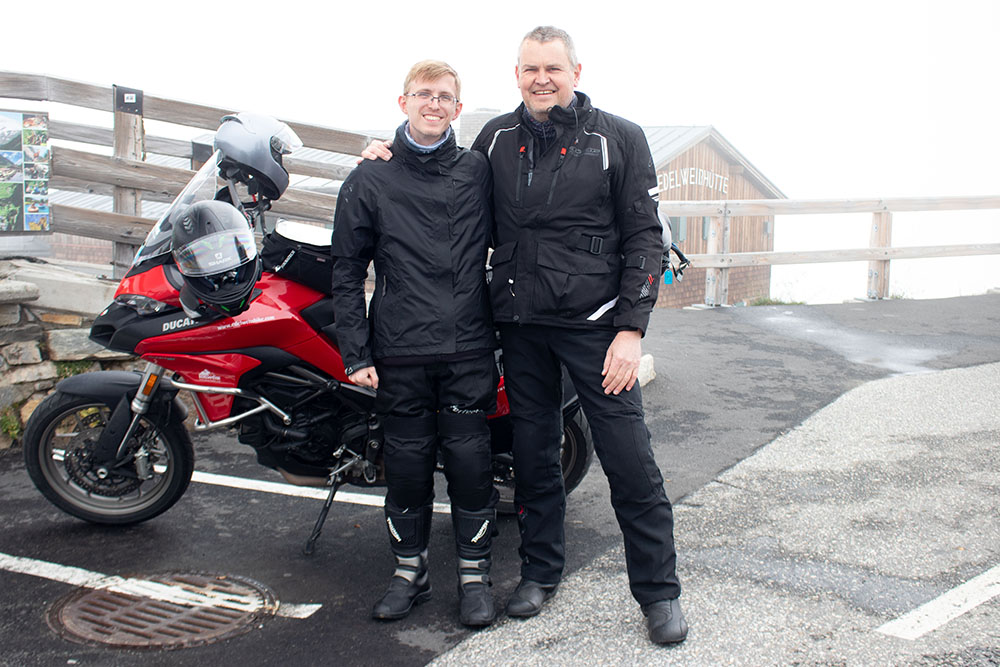 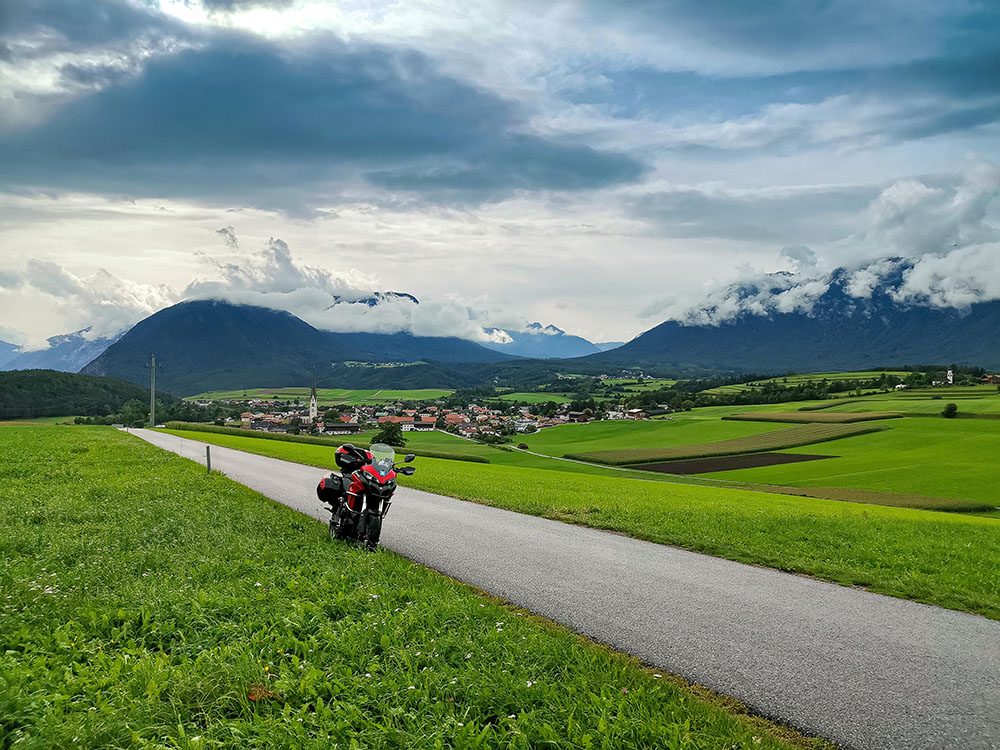 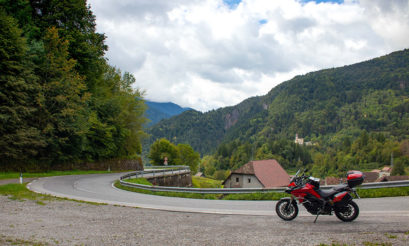 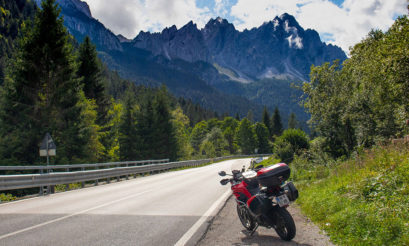 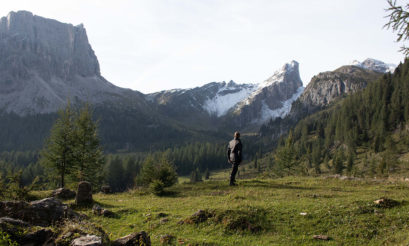 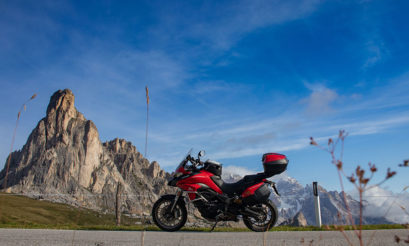 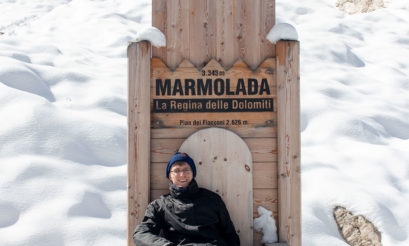 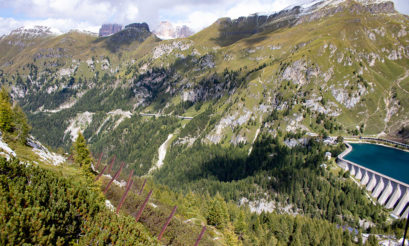 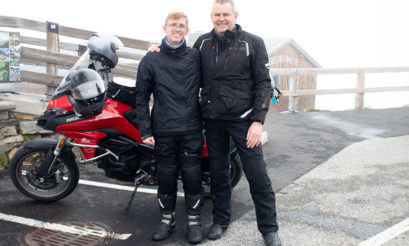 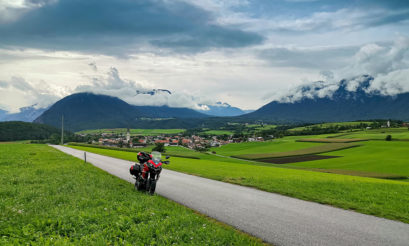 I have always been passionate about motorcycles. My love for travel though, that came a bit later in life. My mom was always the lone traveller as my dad had an intense fear of flying. When I realised I could combine my love for travel with my love for motorcycles I knew I have inherited my mom’s wanderlust.

I undertook many trips in South Africa on my bike. I rode in the rain and mud in Haenertsburg. I rode up Sani pass and down Gamkaskloof.  I had many conversations with random strangers in the most unexpected places. Riding in South Africa is easy. I know where towns are, I know the language and the cultures. It was when I started contemplating a trip overseas that I found myself out of my depth. I needed a bike, accommodation and proper guidance. I started looking around for guided tours and the one name that always seemed to come up was Edelweiss Bike Travel. They offer a range of tours in several countries and they looked like the outfit of choice.

With a vast range of motorcycles and routes to choose from, I started narrowing my choices down to Austria and Italy. The bike was easy. A Ducati, of course! The thought of riding in a group did not really appeal to me, but I thought that was my only choice. Until I saw a small sub-category called self-guided tours. That was the ideal solution for someone like me. I like riding on my own, yet all arrangements are taken care of. I settled on their Precious Dolomites tour. It seemed to offer what I had in mind: scenic roads, sweeping vistas away from the touristy places.

When booking the tour you can select your dates, what bike you would like to ride and what type of accommodation you prefer. Shortly after booking, I received a big envelope with an Edelweiss logo on it. In it were two luggage tags, a map of the area I will be riding in and a route-book. Now I could see, on a map, exactly where I would be riding. Each day is carefully laid out with coffee and lunch stops and interesting places to visit. When I showed the route to my son, he asked if he could tag along. In that moment, my solo adventure became a father and son outing. Very special.

Flying into Munich we made our way to the start of the tour. Edelweiss is stationed in Mieming, a small town just west of Innsbruck in Austria. On arrival we had to sign a form or two before we were handed the keys to our Ducati Multistrada. It was fitted with panniers, a top-box and a tank bag. More than enough packing space for our five days of riding. We were booked into a hotel in Mieming fort the first night and received a list of all the hotels we would be staying at during our trip. That afternoon, we took the bike around Mieming for a quick shakedown, testing our communication and just getting familiar with riding on the wrong side of the road.

As we left Mieming after breakfast, there was a slight drizzle. That was to be the story of day one. The drizzle was soon replaced by heavy rain and made progress painfully slow and treacherous. Not only that, day one is also the longest day of the tour in terms of distance. We soldiered on, occasionally seeking refuge from the relentless rain in a coffee shop. There must have been spectacular scenery along the way, but with the temperature dropping to zero at some sections, we were just relieved when our overnight accommodation came into view. I was drenched. My son had a decent rain suit and the fact that he was sitting behind me also helped. We looked at the weather report for the next day and every single site we visited confirmed that we would have no more rain.

Although the day started off a bit overcast, the rain stayed away. We were soon basking in glorious sunshine and we promptly stopped at the first of many bakeries for coffee and something delightfully sweet. Now we could experience the roads as they should be enjoyed and the Ducati obliged. We noticed shrines at the start of almost all the mountain passes we drove on. These shrines were erected for number of reasons, whether to mark a route for pilgrims to follow or to honour the memory of someone who passed away there. Spotting a shrine meant that either a wonderful pass is about to begin, or that you have come to the end of the one you are on. On passes with lots of hairpin bends, the bends are numbered.

Crossing the border into Italy, I was struck with how easy it is to travel in Europe these days. What was previously a tedious border post is now a restaurant and curio shop. We arrived at Cortina d’ Ampezzo fairly early which afforded us time to explore the town. We could also turn in early to unwind from the previous day’s tension.

We were barely out of Cortina when we saw our first shrine, and the mountain passes started. Both my son and I sat quietly and just soaked in the views. We have mountains here in South Africa, but not the magnitude and sheer beauty of the Dolomites. These mountain forests produced some fine timber and a certain Stradivari searched here for timber to make his violins. When we rode next to lake Fedaia, we were running ahead of schedule so we could take a short break at the Marmolada glacier. We took a gondola up to the tallest mountain in the Dolomites for a breath-taking view of both the lake and the glacier. Even this late in the season, the mountain still had a generous snow cover.

From here we rode through Gardena pass and stopped for lunch at Sella pass. Here we saw an elderly gentleman pull up on a fully laden Triumph Trophy motorcycle. I doubt I could fit all his luggage in my car, let alone on a bike. Yet he managed. I got up to hear his story, but he was somehow not happy with his choice of parking spot and set off at a gentle pace. I wish I could have chatted to him because he must have a thousand stories to tell.

When we got to Bolzano we checked into our hotel and walked to the South Tyrol Museum of Archaeology to see the exhibit for Ötzi, the iceman. He was discovered in the ice by chance in 1991. At first he was thought to be a hiker that got lost, but on closer inspection it turned out that he was indeed a relic from the Copper age. As far as archaeology finds go, this one was a sensation. The interactive museum showcases all the archaeological advances this one person had. Ötzi himself is also on display in a cabinet that replicates the conditions where he was found.

The second last day of our tour featured more mountain passes, but this time they were narrow single lane country roads. There is a faster way of getting to Lienz, but who wants to do that? We stopped at rural churches and drove though vineyards. These are the routes only local knowledge will ever reveal. For lunch we stopped at the scenic Lago di Braies. It was a disappointment. Packed with tourists with selfie-sticks, I wanted to get away quickly. I wanted to be on a twisty road with shrines and numbered hairpins. Not people jostling for position to get twenty-seven selfies in front of the lake. At Lienz we were treated to an excellent stay at Sporthotel Hochlienz. This wonderful hotel serves afternoon coffee and cake, and a sumptuous dinner as you overlook the town of Lienz. The owner even came over for a long chat. As far as highlights go, this one was right up there.

As we said our goodbyes to the hotel owner, Hans, we had one more highlight to look forward to. The Grossglockner pass. The pass itself is a masterpiece of engineering and is Austria’s highest mountain pass. The Grossglockner mountain is also Austria’s highest mountain at 3798m. We took our time here visiting both of the stops on the pass: Kaiser-Franz-Josefs-Höhe and Edelweissspitze. We left there after midday, and headed back to Mieming. The mood in the helmets were quiet yet content. We were saturated with spectacular views and I knew that I was not done exploring Austria.

When we handed the bike back, we treated ourselves to some traditional Austrian food and reminisced over a wonderful five day journey. Would I book through Edelweiss again? Most definitely! Since my tour, Edelweiss has expanded the self-guided choices to six tours.  In Bolzano, I remarked to my son that I would have loved to have added a rest-day. The famous Stelvio pass is not far from Bolzano, so if we had an extra day, we could have done that too. Unbeknownst to me, Edelweiss have since added the option for a rest day to their tours.

Edelweiss Bike Travel have also embraced the electric revolution and they offer a range of tours on e-bikes too.  So whether you want to travel by motorcycle or pedal your way through the woods, Edelweiss Bike Travel is a one-stop shop for your two-wheel travel requirements.

This trip was the first time I spent any prolonged time on a bike other than perhaps a few slow turns around the block at home. It was something to make me both nervous and excited at the same time.

The first day started with my dad and I taking a few slow turns around the countryside just to get me used to the experience of riding pillion. With his help and coaching it became a quite natural feeling in no time, allowing me plenty of time to just sit back, relax, and enjoy the views of the spectacular countryside.

In this regard, the pillion seat of the Ducati Multistrada was perfect. It allowed me to get a view of the road ahead when sitting up straight, and to shield myself from some of the rougher weather when sitting back against the top box.

The trip brought back some of of my fondest memories of staring out of the window on road trips with family as a child, with new adventures and surprises around every corner whilst exploring this beautiful countryside and experiencing its rich heritage. This of course was accompanied with frequent raids into local pastry shops and restaurants for a sample of the local cuisine, and a welcome chance to stretch our legs.

Just because you haven’t been on a bike before, doesn’t mean that this kind of travel is not for you. 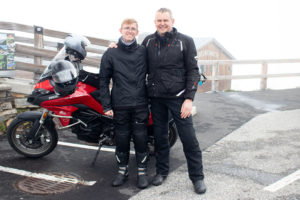 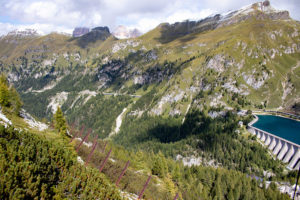 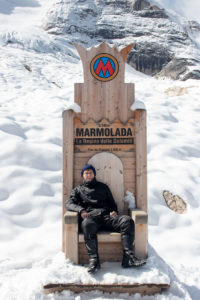 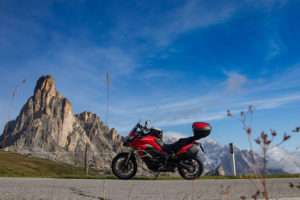 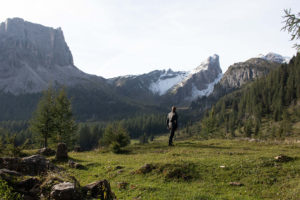 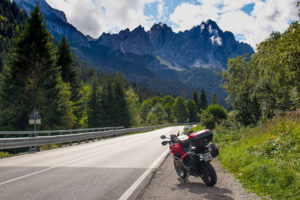 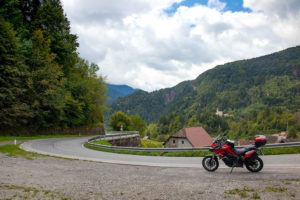