We like to think of the crossover as a recent invention, but it actually dates back more than 30 years. The concept of a high-riding station wagon meant for some light off-roading was invented by AMC, but it was a case of the wrong car at the wrong time.

The American Motors Corporation (AMC) was formed in 1954 and was considered a competitor to GM, Ford and Chrysler.

AMC was particularly good at building odd vehicles that almost nobody wanted, which inevitably led to its demise in 1987.

Now, nearly 30 years later, the now-defunct company is being redeemed by the fact that it was responsible for the very first crossover.

Back in the mid-’70s the engineers at AMC realised that off-roaders were massively over-engineered, offering way more 4×4 ability than the average driver ever used. In their minds, there was space for a vehicle that was cheaper, more fuel-efficient and easier to live with, yet still offered just the right amount of traction and security for harsh weather situations.

They went to the drawing board and came up with the Eagle and in 1980 it was introduced to the public. From its launch, it was available as a sedan, station wagon and coupé. Sounds familiar, doesn’t it?

Looking back now, it was an impressive car. It featured a 4.2-litre straight-six engine, which developed 85kW and 285Nm of torque. The power was fed to the wheels via a three-speed automatic transmission.

All Eagles were equipped with permanent four-wheel drive with a viscous fluid coupling that allowed the system to operate on hard surfaces without drivetrain windup. As standard, it was also equipped with Dana 30 and Dana 35 differentials, which meant AMC actually included more 4×4 kit than most crossovers feature these days.

Initially, it was a huge success. It sold exceptionally well in middle America, where snow was a regular occurrence. It did so well that AMC eventually killed one of its other models to increase Eagle production. Then end result was an increase in sales of 18% over the previous year, all down the humble Eagle.

Sales continued to grow throughout the ‘80s, but by 1986 Eagle sales started to spiral downward. Customers had started worrying about AMC’s future and were hesitant to invest in a brand that might go belly-up. Interestingly, the downward spiral in sales also coincided with AMC pulling the Eagle from the ProRally series, where it performed admirably.

By 1988, Eagle sales dropped to just over 2 000 units. In a country as big as the United States, it was simply not good enough so the new parent company (Chrysler) shut down the operation.

These days it’s hard to believe that a car like the Eagle failed, or at the very least moved on to a second-generation. Considering the modern consumer’s obsession with crossovers, the Eagle was undoubtedly ahead of its time.

There are many theories as to why sales dropped as drastically as they did. Some reckon Chrysler did a poor job of marketing the car, while others think it went downhill after the racing stopped.

Looking back, we think it had something to do with the economic climate. The USA was in rude health at that time. There were some serious Gordon Gekko, “greed is good” vibes going on at the time. There was no need to buy a smaller, more fuel-efficient car because why would you? Most people had enough money to buy a Bronco and they did…

We’re quite certain that had the Eagle been built at the turn of the century, or any time after 2007, it would have been one of the biggest names in motoring today.

Alas, it was before it’s time and because of that, it’s destined to be forgotten. 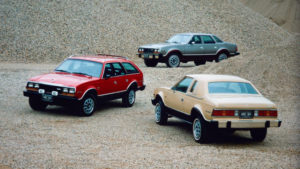